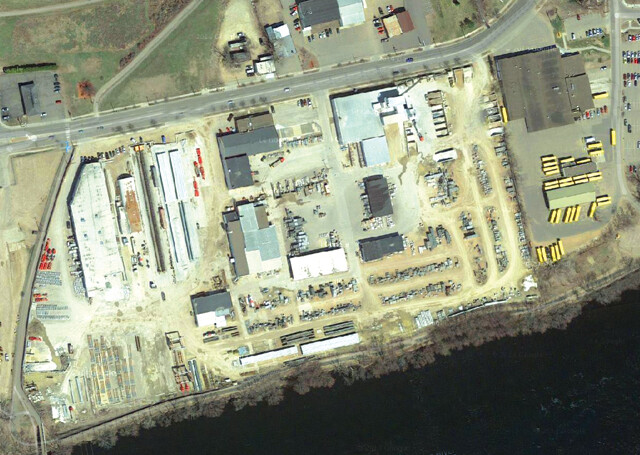 BIG PLOT, BIG PLANS. John and Carolyn Sonnentag are donating a 21-acre
property currently occupied by County Materials Corp. (above) to the UW-Eau Claire
Foundation. The land is bordered on the north by Menomonie Street and on
the south by the Chippewa River Trail and the river itself. (Image source: Google, DigitalGlobe)

A $10 million donation from a pair of UW-Eau Claire alumni will be a literal and figurative game-changer for the university and the community, providing a location for a privately funded 7,500 capacity multipurpose venue that will eventually replace the aging, undersized Zorn Arena.

The university announced Tuesday, Aug. 5, that John and Carolyn Sonnentag, owners of County Materials Corp., are donating approximately $10 million in property and funds to the UWEC Foundation. The gift – the largest in the UWEC Foundation’s 60-year history – includes 21 acres on Menomonie Street in Eau Claire where County Materials’ concrete manufacturing facility now stands. The property, 1111 Menomonie St., lies on the south side of Menomonie Street along the tree-lined bank of the Chippewa River. The Chippewa River State Trail wraps around its southern and western boundary, and to the east is Student Transit-Eau Claire’s bus facility. The university says that the property will be used for new fitness, recreational, and athletic facilities for the campus, and possibly the community: A joint-use agreement with the Eau Claire YMCA, which has sought for years to built a new facility, is under discussion.

“Carolyn and I feel that the UW-Eau Claire and the Eau Claire communities have made such a great contribution to our lives, that we want to give back in whatever capacity we can,” said John Sonnentag, who now lives with his wife in Florida. “We are very pleased to help make this project happen.”

While a freshman in 1960 at what was then known as Wisconsin State College at Eau Claire, Sonnentag said he was impressed by how eloquently Leonard Haas, the college’s president, spoke about the institution’s dedication to excellence. “I hope Dr. Leonard Haas would be proud of the excellent event center we are about to build here,” Sonnentag said. He appealed to his fellow alumni to be generous with the project, too.

University officials stressed that the project to create the County Materials Event and Recreation Complex is only in its preliminary stages. The project will be paid for through private donations – not tax dollars – and UWEC remains focused on seeing the Confluence Project to fruition. (Later this month, UWEC will seek $25 million from the UW System Board of Regents to pay for its share of the latter project, a joint community-university performing arts center in downtown Eau Claire.) AN EVENTFUL RIVERSIDE. The university plans to raise private funds to transform the property (shown above, along the Chippewa River) into a new 7,500 capacity multipurpose venue, including fitness, recreational, and athletic facilities for the campus and community.

“The Confluence arts center and the larger County Materials Event and Recreation Complex … are complementary projects that, together, meet high-priority needs of the university and the Eau Claire community,” said UWEC Chancellor James Schmidt. “This new larger venue would meet the growing event facilities needs of the university while also greatly advancing the Eau Claire community’s competitiveness in attracting business, entertainment, and sports activities.”

“For decades we struggled with lack of competitive facilities. I see the potential here as a game-changer.”
– Linda John, Visit Eau Claire executive director

Schmidt noted that the university has a long-term goal, outlined in its 2011 master plan, of working with the community to replace Zorn Arena by 2020. The master plan calls for an off-campus multipurpose event center that would accommodate basketball, convention space, exhibit halls, and more, totaling as much as 160,000 gross square feet. Zorn Arena, which was built in 1951, has a capacity of only 3,400, making it too small to host large community events and even some university gatherings. The need to replace it has been clear for decades: UWEC had only 750 students when Zorn was built (it now has 11,000), and way back in 1971 the fieldhouse was called “tiny” in a Sports Illustrated article about the men’s basketball team – an article that mentioned the university’s desire to build a replacement “not too far in the future.”

“That was 43 years ago, folks, and we’ve been talking about it ever since,” Schmidt quipped, eliciting laughter during a crowded news conference at County Materials’ office.

Mike Rindo, assistant chancellor for facilities and university relations, noted that the County Materials site is close to campus, Clairemont Avenue, and Interstate 94, as well as to Carson Park, where the Blugolds play football, and Hobbs Ice Arena, where they play hockey. “You really create a triangle of facilities that creates a destination,” he said. Linda John, executive director of Visit Eau Claire, greeted the announcement with enthusiasm. In just the past few years alone, she said, Chippewa Valley businesses have missed out on $44 million in economic activity because the region lacked sufficient space for large trade shows, sporting events, and other activities. “For decades we struggled with lack of competitive facilities,” she said. “I see the potential here as a game-changer.”

Ken Van Es, executive director of the Eau Claire YMCA, said his organization has been in preliminary discussions with the university to partner on the project. “We think there’s some real opportunities here,” he said, noting a partnership could save the YMCA money. “Hopefully we can get to a point where we say it’s an opportunity for all of us.”

For more than a decade, the YMCA has sought to build a new facility of its own; at one time it hoped to do so next to Carson Park, not far from the land now being donated to UWEC. The donation creates the possibility of the university and the YMCA building adjacent facilities that, while separately owned, could be shared by students and YMCA members alike. UWEC Student Senate Vice President Jake Wrasse said a new multipurpose facility will help recruit students as well as keep those who live off-campus – particularly in the nearby Randall Park neighborhood – actively engaged with the university. “I think this is exciting because we can meet our facility needs and fully integrate (with) the community,” said Wrasse, who added that he felt UWEC students would be willing to help pay for the project through self-imposed fees, as they did with the new Davies Center.

John Sonnentag said County Materials has several other properties in the area and plans on relocating its Eau Claire operation in two or three years to make way for the event center project. He added that the project won’t cause a loss of jobs or impact the company’s customers.

Kimera Way, president of the UWEC Foundation, said her organization is taking the first steps toward determining the best use for the Sonnentags’ property that aligns with the couple’s wishes. “The foundation will focus during the 2014-15 academic year to complete the planning, seeking input from students, the university and the general community on how to maximize the benefit of the Sonnentags’ transformational gift,” Way said.

You can find UW-Eau Claire's press release
on the announcement here.