Heading into its eighth year, the U.S. National Kubb Championship is boasting its largest response ever. The yard-game-turned-competitive-sport rose from just 35 registered players in 2007 to 310 in 2013, as the tournament sprawled across its current home at the Eau Claire Soccer Park. This year’s tournament runs July 12-13.

National director and Eau Claire local Eric Anderson says he can’t help but love the direction the sport has taken since its arrival. He said the phenomenal growth stems from the combined effort of countless enthusiastic players and dedicated volunteers, working to mold the sport – and national tournament – into what we see today.

“There’s people in all of these communities who are passionate about it and want to see it grow as a game and a sport both,” Anderson said. “I think it’s really special that we – we being Eau Claire – held the first really organized kubb tournament in America.”

And things are always evolving. Scheduled for Friday, July 11, Anderson has added a new national kids’ tournament. He feels that, since the national championship is a popular two-day event, adding a youth component to create a three-day kubb-stravaganza is a natural move.

Anderson said teams are continually emerging with new strategies and techniques to gain a competitive advantage as well. American tournament directors have been working hard to keep the sport accessible and interesting to both novice and hardcore players, but teams looking to break into the national championship’s final rounds must develop a high level of skill and mental toughness.

Thrown Together: Sportsmanship and Fun

One such competitor returning to the championship is Evan Fitzgerald of Roscoe, Ill. A lifelong sports enthusiast, Fitzgerald’s advanced skill and dedication to training has attracted the eye of many top national teams, including former national champs The Knockerheads of Des Moines, Iowa – whom Fitzgerald joined in late 2013.

“Many ‘toss sport games’ are very one dimensional, while the skills needed for kubb are diverse and challenging to develop.” – kubb competitor Evan Fitzgerald

“Many ‘toss sport games’ are very one-dimensional, while the skills needed for kubb are diverse and challenging to develop,” Fitzgerald says. Frustrated by the negative attitudes he saw in local softball leagues, Fitzgerald turned to curling, and later kubb, to find a more positive atmosphere.

“I’m attracted to the high level of sportsmanship displayed by tournament players,” he explains, “It is second to none, and I hope we keep that spirit.”

The Leinenkubbels, an Eau Claire team, have been in the past four national competitions, taking third place in 2012 and fifth last year. Player Gregg Jochimsen, who organizes the Chippewa Valley Kubb League, says his team practices at least once a week, but he personally works on his game every night to keep sharp. He credits the friendships he’s made and welcoming attitude of area tournaments as his motivation for actively participating and promoting the game.

“With the sport aspect now, one thing that’s cool is you have these rivalries with some of these teams and some of these players, but it’s a game that everyone at the end of the day is shaking hands and having a good time,” he says. 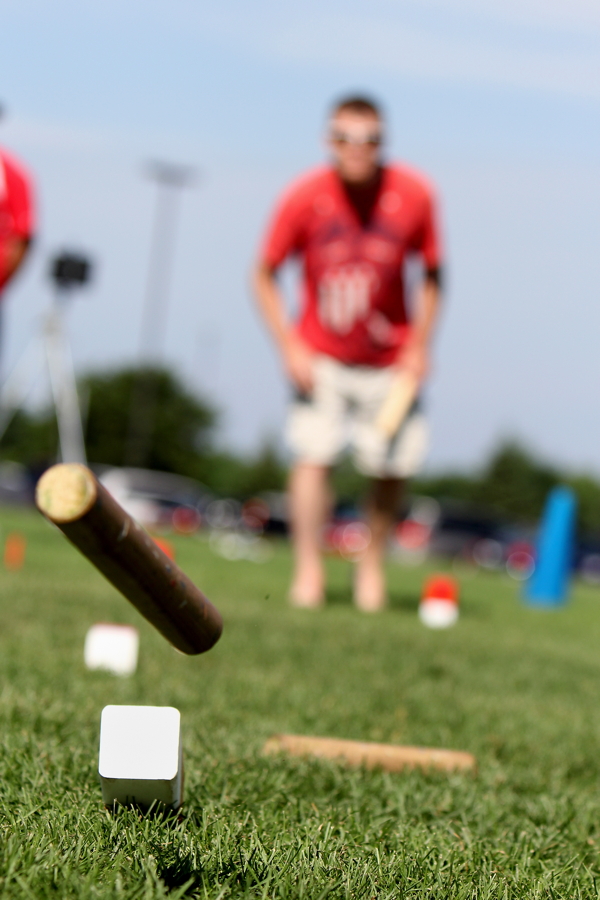 Despite the growth in skilled kubb competition and a general explosion in the sport’s popularity, Anderson says absolutely anyone, regardless of skill, can participate in the national championship. He worries that casual players might be too intimidated to sign up.

Even in Europe, where kubb is more of an institution, there is room for everyone. “There are dozens of tournaments all throughout Europe,” Anderson says. “I think Belgium alone has over 50 or 60 tournaments, and then the World Championship is in August.”

In 2011, Anderson traveled to the island of Gotland, Sweden, to play in the World Kubb Championship. Anderson said only about one quarter of the 180 six-person teams was looking to seriously compete, while the rest were there to party. In this spirit, he’s designed the U.S. National Kubb Championship to satisfy both seasoned competitors and brand-new players looking to have a fantastic day outside with friends.