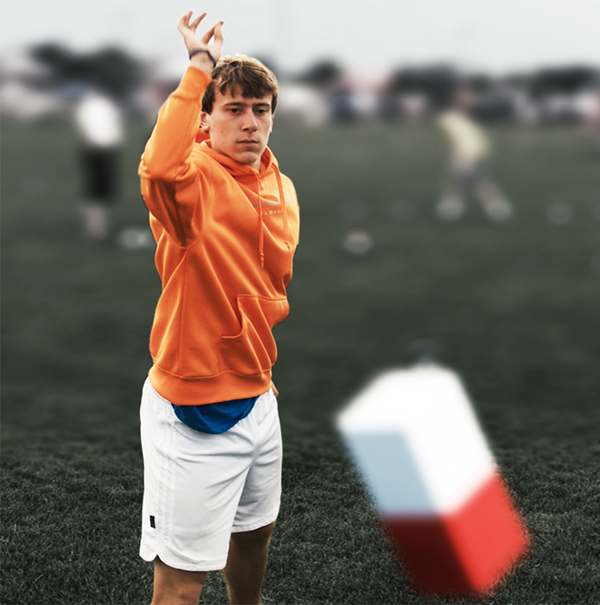 Mark Blazel, of two-time U.S. National Kubb Champion team the Kubbsicles (one of
the remarkable teams featured in the locally made documentary Games of Throws),
drills a field kubb during the 2013 national tournament.

The U.S. National Kubb Tournament has called Eau Claire home since 2008, and the community has really embraced the Nordic lawn game as a proud aspect of our culture. Certain enthusiastic community members have played a major role in elevating kubb’s presence in Eau Claire and adding to the city’s reputation as the “Kubb Capital of North America.” Two of those people are Eric Anderson of Wisconsin Kubb and Matt Wigdahl, creative director of SkyMotion Media. They have collaborated with the U.S. Championship for photos, videos, and promotion in the past, but this time their collaboration went a step further in the production of the new kubb documentary Game of Throws: Two Teams Aim for the U.S. National Kubb Championship.

Anderson had toyed with the idea of a kubb documentary in the past and after some brainstorming with SkyMotion, landed on the idea of showcasing the sports angle of kubb. The idea behind it is this: Team Knockerheads of Des Moines, Iowa, beat Team Kubbsicles of Eau Claire in the 2011 U.S. semifinal, then went on to win the U.S. title. The Kubbsicles then beat the Knockerheads in the 2012 U.S. Final. Game of Throws looks at these two teams for about five weeks leading up to the tournament in Eau Claire last July as they try to reach the 2013 final and become the first two-time U.S. champions. For “non-kubbers,” there is also some backstory. “It was an easy decision to pick these two teams to follow due to their history playing against each other and being the top two teams in the U.S.,” Anderson says. “I asked both of the teams, and they were both gracious enough to agree.”

Besides just following the competition aspect of kubb and last year’s championship, Wigdahl believes the film gives a more intimate look into what teams go through to be at the top of their game. “When you play kubb, you stand eight meters away from the other team, and you don’t always get to know them,” he says. “This film gets the mic on players practicing in their backyards and reviewing film in their living rooms. … Kubb may unite people and bring peace on earth, but these guys are in it to win it, and someone’s got to lose for that to happen.” He also adds that his favorite memories from filming come from watching the teams talk strategy and showing their commitment.

This documentary means a lot to the kubb community in general, to the U.S. championship, and especially to Anderson, Wigdahl, and the others involved in putting it together. “Locally, it is a pure celebration of what many people have done by introducing and promoting kubb throughout the Chippewa Valley and what the community has embraced,” Anderson says, while Wigdahl calls it “a total celebration” of kubb culture and sport.

Check out the Game of Throws trailer