Smoke, But No Fire When I write any article for Volume One, I’m always aware that I need to “keep it local.” That’s the heart and soul of what this publication does. So, when I suggested an article on a new Eau Claire business, E-Cig 53 (a bunch more on that soon), I thought I was going to have to stretch to write about this store and this new industry and still make it all Sconi.

Granted, electronic cigarettes – e-cigs, for short – have the potential to free smokers from one of the most deadly addictions humanity has ever encountered ... but that kind of somehow seems bigger picture.

The thing is, there is an amazing news story on e-cigs in Wisconsin and we happen to be at the center of it. This is both on a local level with a new niche shop, and at the state level with an international distributor which is setting an amazing example as a Wisconsin employer. Then, just for good measure this story also has potential legislation on e-cigs that would buck national trends.

So e-smoke ’em if you got ’em, it’s going to be a journalistic ride.

Nestled on Hastings Way and Fenwick Avenue, E-Cig 53 is the first Eau Claire store to offer a wide variety of e-cig devices. Owner Kyle Anderson came into this market in an unexpected way. “I had started selling e-cigs in my sports nutrition store in the Twin Cities, and they soon became my core source of sales due to huge demand after tobacco prices increased,” he says. “My girlfriend Nicole and I wanted to raise a family in a better place than the metro, and her dad said he would back us, so two weeks later we moved to Eau Claire and became a family business.” 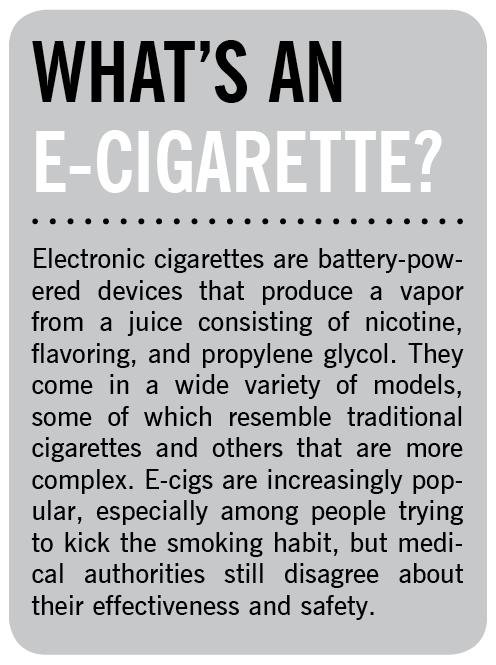 To say E-Cig 53 is one-of-a-kind is something of an understatement.  While other Eau Claire stores offer e-cigs and liquid (or “juice”), many of the devices they sell are basic and ­– in terms of quality – “entry level.”

One look into the display cases at E-Cig 53 makes it obvious just how many options there are for these devices on the market. The options run from a “Vape Pen” which looks kind of like a Sharpie marker to wooden models designed to sit on a shelf to a a new e-pipe that just came on the market.

The store also offers many options on the juices for the e-cigs. They even have a flavor testing area where they offer samples of the flavors they mix in the shop, in a way that is refreshingly hygienic.

One option E-Cig 53 does not offer is selling to minors. “We ID anyone who appears under 30,” Anderson says. “We take a strong ethical stance at keeping minors away from nicotine. While it is not common, parents do time to time come in to buy e-cigs for their under-18 children, saying the cost and health benefits are what they are trying to improve on. But again, that’s the parents’ choice, and we don’t recommend or promote under 18 use of our products.” (Note: State and federal law do not prohibit the sale of these products to minors.)

Anderson said customer reception of his store has been good; in fact, he’s planning on opening an outlet in Menomonie as well. “We guarantee our products and treat our customers with dignity,” he says. “Since I understand addiction, it is easy for me to relate to these folks coming in nervous about making the switch.”

In 2008, Christian Berkey was working on his own innovations to the e-cig industry in the southern Wisconsin village of Johnson Creek. An avid e-smoker, he created Smoke Juice and what has become a major player in the market: Johnson Creek Enterprises. The firm is the largest maker and seller of e-cig juice in the United States and the second largest in the world with retail, wholesale, and custom blend divisions also housed at their headquarters.

At a time when many product developers do their development in-state and manufacturing overseas, Berkey bucked that trend and chose to keep his manufacturing in Wisconsin. “Christian loves Wisconsin and is very proud to show just how great a Wisconsin company can be,” says Susan Geiger, the company’s director of communications. “Johnson Creek was founded right when the recession was beginning in 2008. We started with three employees and now employ 57. The end of 2014 will see the addition of another 90 to 100 employees to the Johnson Creek family.”

To make Wisconsin even more unique in the e-cig landscape, state Sen. Glenn Grothman, R-West Bend, has drafted legislation changing how e-cig vapor is regulated in the state. Senate Bill 440 seeks to “exempt electronic smoking devices from the types of smoking devices that may not be used in certain locations.” In short, the bill would make it OK to use e-cigs in bars and other public places where people can no longer smoke cigarettes.

This proposal goes against the prevailing national trend in states such as Utah, North Dakota, Arkansas, and New Jersey, where indoor use of e-cigs is prohibited, and other states, where their sale is restricted to minors.

So yeah, I guess Wisconsin is kind of a big e-cig deal.