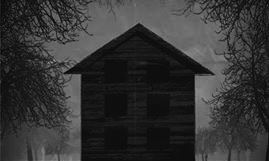 The UWEC Players are a theater group that provides a unique platform for theater performances because every aspect of a production – from the script to the directing to tech to design – is completely student-run. This gives the community a chance to see what UW-Eau Claire students are really capable of.

The UWEC Players latest production, Thieves and Bad, Bad Lies, was written by recent UWEC graduate and River Falls native Logan Toftness, who describes the plot this way: “After robbing a liquor store, a young man and woman hide in what they thought was an abandoned house in the woods where they meet a little old lady who offers them tea and a place to stay for a short while. It’s a comedy!” UWEC Players president Paul Matthews adds that the story is filled with a series of “poorly managed lies and plenty of hilarious confusion.”

“When there is a palpable tension in the air or an audible reaction – a laugh or a cry – you can tell the audience is sharing something immediate with those actors that you just can’t get from a book or film.”
– Logan Toftness, on connecting with the audience on stage

Toftness studied theater at UWEC and has been involved with it since grade school, writing and performing plays with friends for quite some time. Although she has experience as a playwright, Thieves and Bad, Bad Lies, has been her longest project yet. She says it is the audience’s connection to the story that she is trying to tell that really gets her excited about theater. “When there is a palpable tension in the air or an audible reaction – a laugh or a cry – you can tell the audience is sharing something immediate with those actors that you just can’t get from a book or film,” she says. Toftness describes her style as a little unconventional, combing elements of quirky characters with somewhat dark humor, but keeping more potent, serious elements as well, drawing artistic influences from Samuel Beckett, Tony Kushner, David Lindsay-Abaire, and Caryl Churchill.

Coming from a slightly different perspective, Matthews is a business/chemistry major who recently became re-involved with theater during his sophomore year in college after his interest in production grew more and more. He’s thrilled about his new opportunity as head of the players. “As a chemistry/business major, my academic life can get bogged down in facts and numbers and such,” he says. “It’s really nice being able to come over to Haas (Fine Arts Center) and see the human side of things. Plus, theater people are just the best.” Although he doesn’t necessarily think of himself as especially artistic, Matthews has been encouraged by the work of entrepreneur Elon Musk, saying that his sci-tech success story has inspired him to “reach for the extraordinary.” Even though this is the first play he has had a hand in producing, he says he has enjoyed all the challenges so far and is really enjoying being a part of this group.

Although Thieves and Bad, Bad Lies is a comedy that features quirky aspects such as drag queens, cookies, cross-dressing, lesbians, and booze, Toftness says it is also very much about an honest struggle each of the characters face as they try to find their place in the world. “It’s sort of about love and the unexpected places life takes you,” she says. “And it, of course, is about thieves and liars.” Matthews adds that the play is a farce, so the audience shouldn’t expect a “fairytale moral” but they will see that “it’s important to recognize those around you who care and to appreciate those people.” Even though some of the play’s elements may seem a little risqué, most are pretty light-hearted and audience members of all ages are welcome.