River Theatre on the Way? The proposed theatre would be located next to the Grand Avenue footbridge in downtown Eau Claire. (Map adapted from Eau Claire’s Parks and Waterways Plan.)

Eau Claire is slowly putting riverfront development plans in motion and you can see some hints of progress down on Grand Avenue. Still, right now it doesn’t look like much and Ann Sessions, Executive Director at the Chippewa Valley Theatre Guild, agrees.

“We’re still on hold until we get to know the space that we’ll end up with once they’ve done all the work with the river bank,” Sessions said. 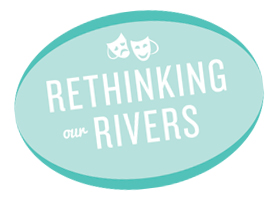 The process that began a few weeks ago is leading up to the construction of an outdoor theater near the river for the CVTG. But a few things need to happen first before you can enjoy live shows on the river.

This new theater is part of a much larger project which is known as the Waterways Plan (which you can read about in great detail starting on page 30). The Waterways Plan is an undertaking by Eau Claire’s Waterways and Park Commission. The plan was officially approved in July by the City Council and over the course of the year construction crews will begin to alter the river banks near the Chippewa River – some changes will happen quickly, but others not so much. One of these changes is the addition of an outdoor theater near the CVTG, which will look out over the river and alter the trails.

The trail changes will range from East Grand Avenue toward Lake Street. Moving the trail closer to the river opens up more green space for the outdoor theater and grassy seating much like that found in Phoenix Park.

Sessions said the landscaping would allow people to watch a show in comfort and take in the great view of the river behind the theater.

The construction is expected to last through the fall and partially into spring of next year. Sessions said that the Guild is waiting patiently until the grounds are clear before they start work on the theater.

It’s all a waiting game at this point. But Sessions said that once the theater is complete, she would like to plan block parties in the district and hold performances over the coming summer. The theater is going to be funded by the CVTG (not Eau Claire citizens’ tax dollars) so some fundraising is expected.

So if you were expecting a new stage for the fall, it’s best to look forward until next summer with a new view of the river to back up the show.