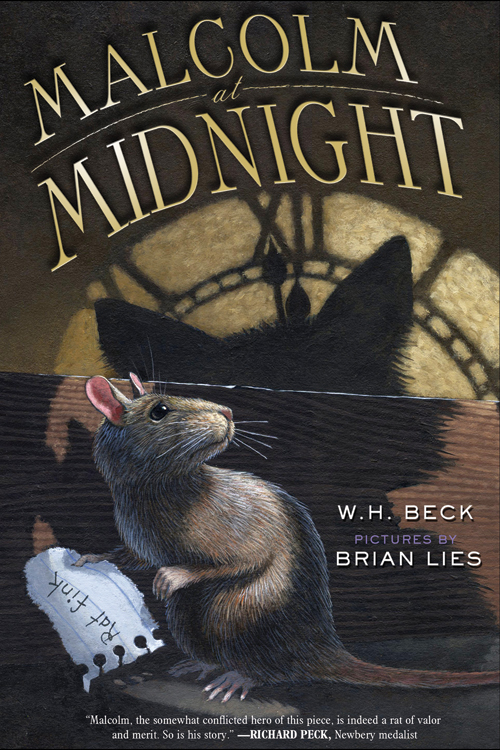 Manz Elementary Media Specialist Becky Wojahn has published her ninth book (six were part of a series) geared toward elementary and middle school-age children, this time under the name W. H. Beck. Released by Houghton Mifflin,
Malcolm at Midnight follows the secret lives of classroom pets, who don’t exactly behave how we might expect them to when the teachers and students are away. Malcolm, a learned rat who convinces others he’s a mouse, begins communicating with a student and eventually becomes embroiled in a plot to wreak havoc on the school. Readers will find out whether Malcolm embraces or rejects the impulse to “rat someone out.” Wojahn grew up in Eau Claire and is raising her own children here (the tale actually began as a bedtime story for her youngest son), so the 272-page novel bursts with references to the area – from the city’s name (Clearwater) to the atmosphere of the novel’s aging McKenna School (modeled after the downtown administration building) and The Pet Emporium (based on the old Tropic Waters/Ben Franklin on Clairemont Ave.)  “I spent tons of time researching old schools, rats, pet cages, heating ducts, all sorts of things – because it’s those little details that make a story sound real,” she said in an interview with Rob Reid, a specialist and fellow author in the genre.Despite the local references and carefully-gleaned details, Malcolm marks a departure from her last books, Dr. Kate and Follow That Food Chain: a Who-Eats-What Adventure Series, respectively, which were works of nonfiction. This is her first book published with Houghton Mifflin, and so far it’s gotten swell reviews from Publisher’s Weekly (“A first-rate debut”) and Kirkus (“A rip-roaring tale; even rodent-haters will have to like Malcolm”).