Writing the Book of Tom 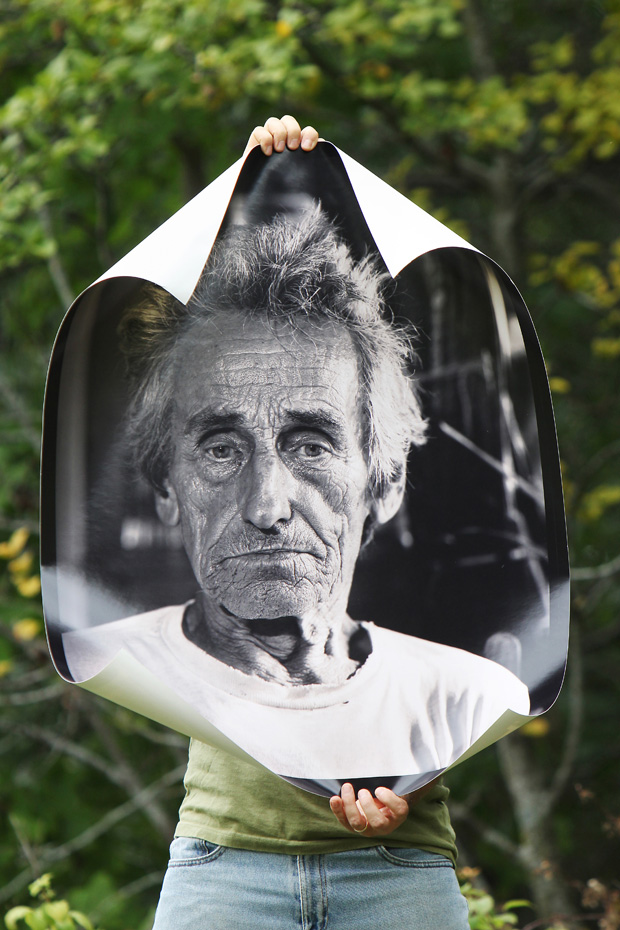 THE MAN BEHIND THE BOOK ABOUT THE MAN. Nonfiction writer Michael Perry holds up a poster of Tom, the subject of his latest book, Visiting Tom: A Man, A Highway, and the Road to Roughneck Grace. (Poster by Shimon & Lindemann)

The man is Tom Hartwig*, Michael Perry’s neighbor. The highway is Interstate 94, that fixture bisecting our landscape (and Tom’s farm). And the “road to roughneck grace” is one that Perry treads over the course of a year of visits to Tom Hartwig’s farm, on the surface seeking to weld a piece of iron, but simultaneously seeking to absorb the 82-year-old’s empirical wisdom. Though anchored to West Central Wisconsin by a smattering of landmarks at once recognizable to local readers (e.g. “towering sandstone cliffs on either side of the roadway” on the 53 bypass), Visiting Tom is fundamentally an ode to an archetype whose home could be anywhere.

In person, the Fall Creek-based author refers to Tom alternately as an old-timer and a “roughneck polymath,” a man whose level of practical know-how contrasts deeply with our modern culture of specialization and dependence. In other words, most of us don’t fashion our own tools, and we couldn’t even fathom the implements needed to, say, make a cannon.

Though Perry says devoting more pages to someone else was intentional after three primarily autobiographical books, he had originally planned to profile ten separate old-timers.

“I pretty quickly realized there’s no way to do justice to all these astounding stories,” says Perry, who was swamped with suggestions. ”It also caused me to re-examine the idea of the term ‘old-timer.’ It’s not always a matter of chronology… it’s a slow and steady approach.”

Tom is certainly qualified for the title, then, as he approaches various trades slowly and steadily, from lathe-cutting and mill-making to dairy farming and beekeeping.

Throughout the process of piecing together Visiting Tom, Perry occasionally sat down with Tom for direct interviews or to hear another account of a time-worn story. Yet he says their relationship neither resembled a mentorship nor became a close friendship.

“The point was not to manipulate the relationship but write about it as it was,” he says. “What I set out to do was find out what I could learn from him just being my neighbor.”

Much like Tom’s small, symbolic victory in 1967 when he and a lawyer convinced the interstate commission to move the roadway just a few feet back so it would circumvent his silo, Perry faces his own uncomfortable battle that necessitates confrontation and mirrors Tom’s tale, in a way. Through Tom, he also grasps the power of the present (Tom has two grown daughters and Perry has two young ones), and realizes that mistakes are to be acknowledged but not dwelled on.

“It’s about equanimity,” says Perry of the book and Tom’s archetype. “Life isn’t fair, but let’s work forward from that point.” Indeed, Tom maintains an open attitude toward life despite the things he can’t change – like the highway that shook his silo until it cracked.

The Intellectual, the Everyday

Though the arc of the book follows a year of visits with Tom, italicized sections between chapters follow a group of vintage photographers (Appleton’s John Shimon and Julie Lindemann) who Perry has hired to document Tom over the course of a single day. These sections describe Tom’s interaction with his familiar (though arcane-to-us) equipment, and the stories they stimulate.

Signature to Perry’s style is his careful consideration of the sort of right-in-front-of-your-nose minutiae often ignored by language, like the “clackety plastic clamshells of store-bought sugar cookies.” He’s got the needle-sharp diction to match his needle-sharp observations. Take, for instance, highway noise, which he deconstructs into its constituent instruments: the “fluttering whip-crack snap of flatbed tarps, the ribbony pop of tie-down straps, the psssssss of air-brake tanks relieving themselves.”

His language is at times esoteric and thick as poetry, but retains an informal, “dipped in mud” finish.  After a beautiful paragraph on fireflies in which he compares them to “star seeds” cruising the earth, he asks, “Is anything so naturally fantastic as a firefly’s butt?” The sentence sits right down on “butt,” and I am appreciative of both the unexpectedness and Perry’s adeptness at blending the intellectual with the everyday. ON THE PATH. Perry (shown here trespassing) has published five books with Harper-Collins.

Writing and Publishing in 2012

Perry says his writing process hasn’t changed much since the publication of his first Harper-Collins book, Population: 485 in 2003. What has changed is his tour schedule, in light of momentous overhaul within the book industry.

“Half the independent bookstores from my first official book tour are gone,” says Perry.  “… so the ones that have survived, it’s because the people running them are tenacious.”

Yet his attitude toward eBooks and Kindles is candid – one might even say equanimous (a nod to Tom’s character).

Of course, like any wordsmith, he professes a fondness for the physicality of “real” books. “I love it when [readers] put me on their shelf; when they have me sign their copies… but it’s equally cool when someone is reading me on their Kindle on the subway in New York City,” he says, mentioning he often takes his Kindle up into his deer stand with him, and thus “everything Montaigne ever wrote.”

Also a musician by trade, Perry is the lead singer, songwriter and guitarist of Michael Perry & The Long Beds (due to record a new album soon), so he’s become attune to the similarities between the music and writing industries.

“A writer without a Kindle now is like a musician without an iPod… We’ve crossed the tipping point that music crossed ten years ago… In fact, I am so glad I fell in with musicians because they taught me how to navigate change,” says Perry. “I watched how they handled the digital revolution and I learned that you better find a way to turn your art into a performance.”

Perry has found multiple ways to engage live audiences, both by booking his own “Clodhopper Monologues” in regional theaters and by continuing to tour with the band. Though it’s more difficult and time-consuming to make a living as a writer nowadays, Perry isn’t complaining.

“I’m grateful and I can’t believe after I’ve fed the chickens, I get to be a writer with a room over the garage,” he says.

After he’s fed the chickens and perhaps paid a trip to Tom Hartwig’s, that is: boots on, piece of iron in hand, mind wide open. 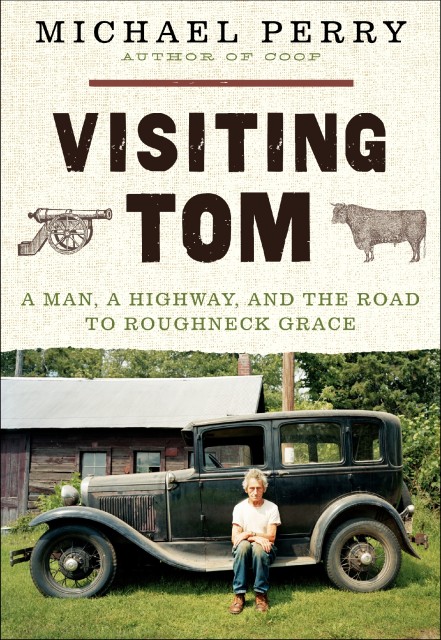