Back and Forth with S. Carey For Sean Carey’s (left) new Hoyas EP, the Bon Iver member tapped Ben Lester (right) for some heavy collaboration, bouncing tracks back and forth between them.

S. Carey’s first album, All We Grow, was very jazzy, very airy, very organic. S. Carey’s new release – a four-song EP called Hoyas which will be out May 8 – isn’t any of those things. It’s very technical, very dense at parts and possesses very few live instruments.

It seems to be a new direction, but for Sean Carey and collaborator Ben Lester it’s really not that new at all.

“We knew the aesthetic we were going for, we just had to figure out how to make the sounds.” – Sean Carey, on his new EP, Hoyas

“One of the coolest things about music today is that so many young people love so many different genres,” Carey said. “For Ben and I, it was jazz and classical and folk and electronica to name a few, so when we started making these songs, we knew the aesthetic we were going for, we just had to figure out how to make the sounds.”

And over the last two years, Carey and Lester have figured out how to make those sounds, each tackling two songs and handing them off to the other. Lester and Carey have known each other (and been fishing together) for years, and the collaboration started by the two just sharing songs they had been working on in Garageband, a music recording software.

The two went back and forth with tracks, playing with each other’s compositions and adding parts as they saw fit. Both musicians have been actively touring over the last couple years – Carey with S. Carey and Bon Iver and Lester with S. Carey, AA Bondy and Field Report – but they kept at it, collaborating over email and when they were both back in Wisconsin. 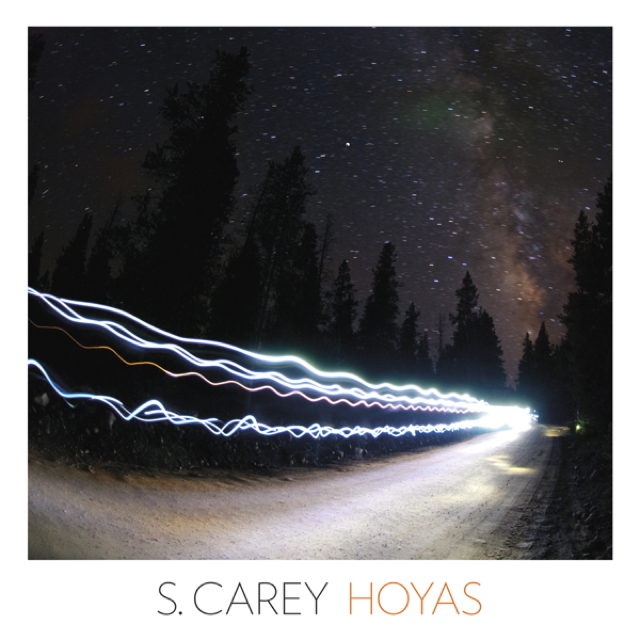 “Honestly I think most of this stuff was centered around us going trout fishing,” Lester said. “He or I would burn a CD of the latest ideas and listen to them on the way to the stream.  No matter how busy we are, there’s always time to go fishing.”

Each song on Hoyas seems to have a story attached to it. Lester explained the first single, “Two Angles”:

“’Two Angles’ I wrote in an empty house in Woodstock, NY.  I think I had just watched Dancer in the Dark, on a bare wood floor next to a wood stove … I was really excited about it, so I walked about 2 miles to the Woodstock library and sent it to Sean.  That one turned out to be more back and forth, and since I had the track on my computer, Sean would call or email with suggestions on what to add or change. Eventually I handed it over to Sean, and let him take it over.”

The four songs on Hoyas range from blippy to heavy, with simple, repetitive melodies and darker beats layered underneath Carey’s often-autotuned vocals. Among the electronics, there are some live instruments, including guitar from S. Carey-veteran Nick Ball and trombone from Andy Hofer (The Gentle Guest). While the songs are easy to listen to and digest on the surface, there’s actually quite a bit going on at any given point with instruments and parts coming in and out rapidly.

At first, Carey said he had “an inner struggle” with the new direction, but he found it freeing to be working on something that, at the time, he wasn’t even sure would be used for S. Carey.

“Eventually I got to point where I wanted to share these songs.  I felt they had merit and I felt that Ben and I had created something cool and new.”