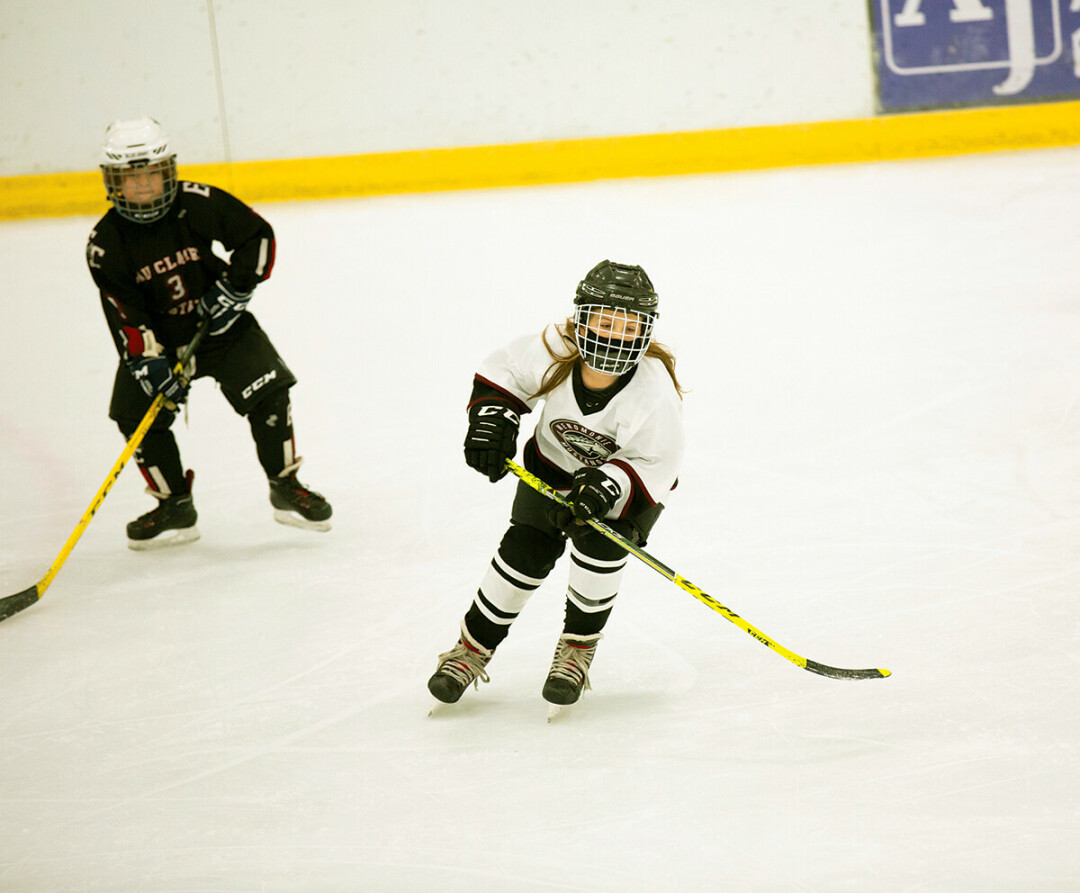 The Menomonie Youth Hockey Association skates to the motto, “Girls Play Too.” It’s one of the reasons why the group has seen record involvement from female hockey players over the past decade.

“It’s different from a lot of my other sports,” said 10-year-old Kynlee Hintzman, a hockey player in the organization, “and mostly I’m with girls. And when I’m with boys, it gives me a different chance, and they push me to be better. And I can be really aggressive with them, and it’s really fun.”

In the 2019-20 season, girls’ participation in Wisconsin Youth Hockey increased by 6.2% for a new five-year high, according to association president Stacy Hintzman. At the Menomonie Youth Hockey Association, 22% of their players are girls – an all-time high in Menomonie since girls were first permitted to play the sport in the 1970s.

“We’ve seen, obviously, some good growth there,” she said. “But I think more importantly what we’re seeing is (higher) numbers at the younger youth level … because that’s the future of hockey.”

I like to prove that I can do it because not a lot of girls play hockey, so it’s nice to be one of the girls that do, so it proves that girls can do anything just like boys.

Twenty-nine percent of the association’s Learn to Skate participants are girls, and 46% of its U6 team participants are female, showing the trend that more younger girls are joining hockey than ever before. Hintzman says this could be due to younger girls looking up to older players, who encourage their friends to join in on the fun. Though participation dropped from an average of 130-160 to 146 skaters this year as a result of the pandemic, Hintzman says the data shows more girls are still lacing up to skate: During the 2019-20 season nationwide, more than 83,000 females competed in hockey, with Wisconsin at the lead nationally.

In 2022, the MYHA will celebrate the 50th anniversary of encouraging local kiddos to play, learn, and compete. “And obviously with lots of focus on sportsmanship,” Hintzman added, “and not only building great athletes but people overall.”

Until high school, girls have the opportunity to choose whether they play in all-girls or co-ed teams, Hintzman said. This allows them the choice to play against boys or girls. On Jan. 24, the association posted to Facebook about their Mini-Mites and Mites girls (aged 8 and under) competing in their first all-girls game.

“I like to prove that I can do it because not a lot of girls play hockey,” said 10-year-old Kynlee, “so it’s nice to be one of the girls that do, so it proves that girls can do anything just like boys.”

If Kynlee could be president, she says her first mission would be to give dogs to everyone because dogs make people happy. But second? She’d allow women to play in the National Hockey League.

Like most sports, Kynlee affirms it takes a lot of blood, sweat, tears, bruises, and hard work to be successful and get to the top, and she attributes her success to challenging herself – and being pushed to challenge herself even more by the boys.

Check out more about the Menomonie Youth Hockey Association at www.menomonieyouthsports.com/myha.

Rebecca Mennecke joined the Volume One team as Associate Editor in 2020. Rebecca studied creative writing and journalism at the University of Wisconsin-Eau Claire and formerly served as editor of None of the Above, managing editor of The Spectator...