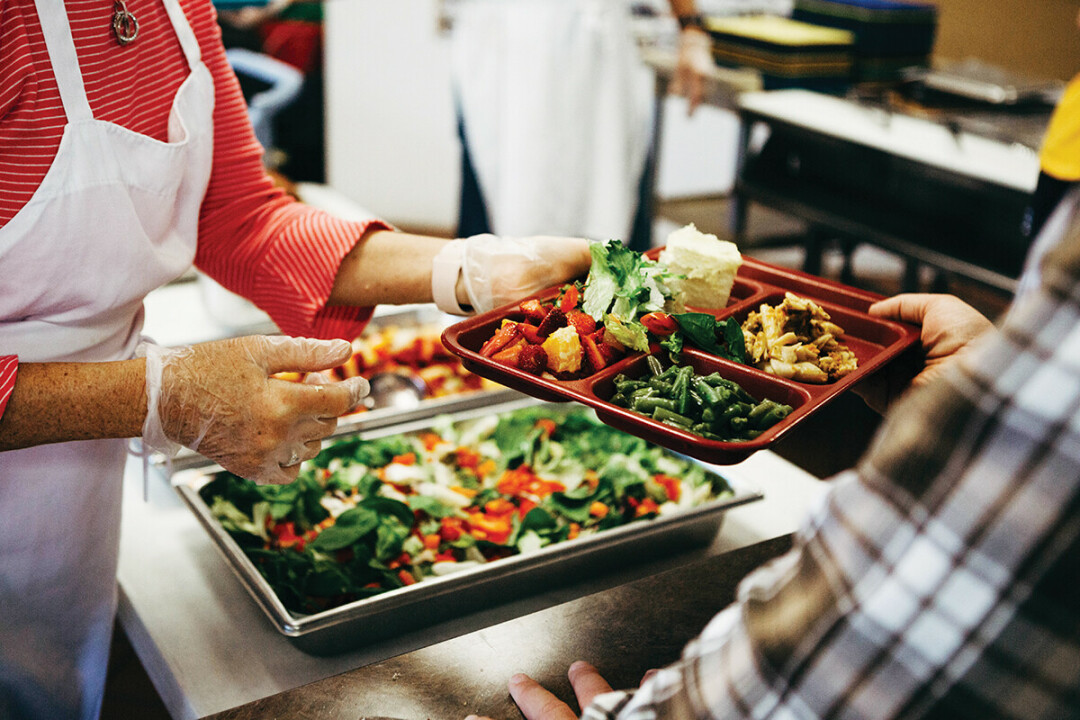 Serving a meal at The Community Table in Eau Claire.

Numerous Menomonie- and Eau Claire-based community dinner organizations have seen a skyrocket in need for meals during pandemic times.

The coronavirus pandemic has completely changed the structure and model of Menomonie’s Tuesday Table, which was founded by Ed and Joy Smith about 14 years ago, according to long-time volunteer Thomas Schmelzle – similar to the other dinner organizations. Instead of dining in, many of the meal organizations offer drive-up or walk-in meals in a to-go style.

“The only thing that is consistent is inconsistency,” volunteer Thomas Schmelzle said. “We could be doing this kind of thing for months yet. We would hope that that’s not the case, but we don’t know. No one knows.”

“The only thing that is consistent is inconsistency,” Schmelzle said. “We could be doing this kind of thing for months yet. We would hope that that’s not the case, but we don’t know. No one knows.”

Most people who come to their dinners are families and elderly folks, though they get the occasional single folks looking for a home-cooked meal. Since the pandemic, however, there’s been an increase of families and younger people stopping by and requesting extra meals, which they then take to their homebound friends and neighbors.

“If you’re soft-hearted, it brings tears to your eyes,” Schmelzle said.

Menomonie’s Wednesday Table – based out of Christ Lutheran Church – has also seen a vast increase in the demand for dinners. In February, their monthly meal average was 88. In July, their average was 176. They’ve served as many as 203 people, according to volunteer Cindy Hoeflein.

“We just keep going until we’re out of food,” Hoeflein said, “and that’s as good as we could do.”

Even then, they often rely on previously frozen meals or leftovers from Tuesday’s Community Table to help them out, Hoeflein said. She suspects much of the increase in demand is as a result of a loss of jobs and furloughs due to COVID-19.

“They don’t know what’s coming at them tomorrow,” Hoeflein said. “We want to make sure nobody goes without.”

Since the beginning of the pandemic in March, the Thursday Community Table at First Congregational Church has seen an increase from serving 41 meals a week to serving up to 96 meals – with an average of about 65 meals a week – all with only two cooks in the kitchen. Ordinarily, they would have anywhere from 12-15 volunteers to help out – often scouting groups and campus groups pitching in too.  “We’re just very happy to be able to provide this service for our community,” Schmelzle said. “It’s a no-questions asked, everybody who comes to the door gets a meal or more.”

Learn more about the Community Table in Eau Claire, including its meal schedule, at thecommunitytable.org.