dreamed up by artist Nonfat Melk, the mural pops at the local coffee house with high saturation and curious creatures 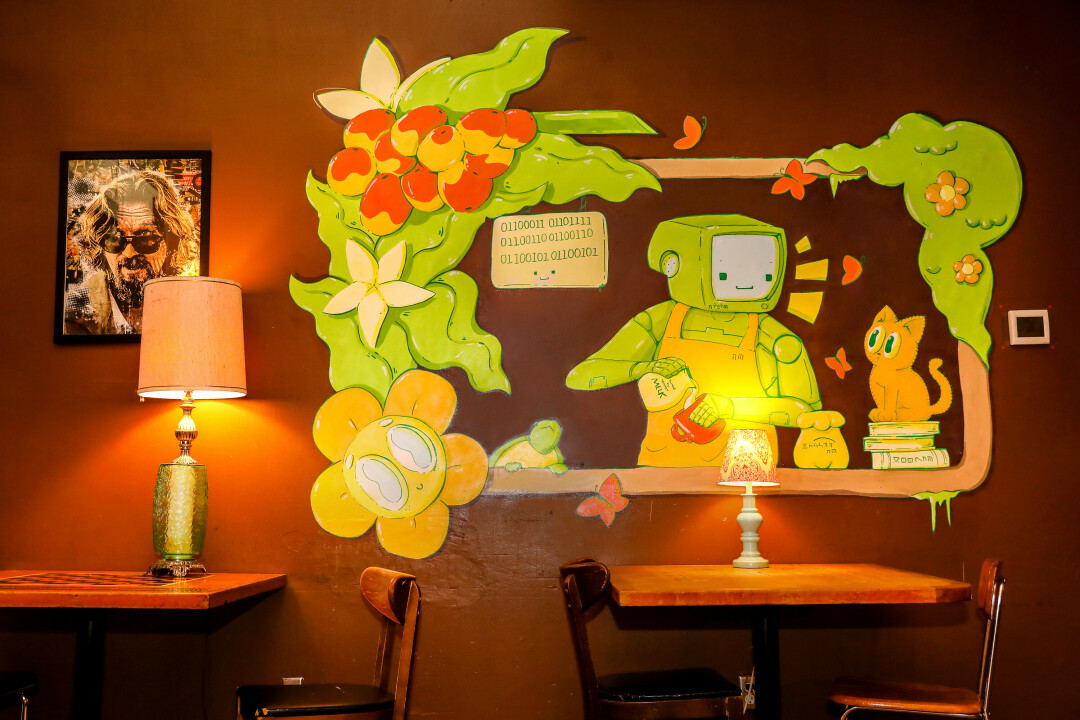 Racy D’Lenes Coffee Lounge, a staple downtown Eau Claire coffee joint, has always had its own signature look and vibe. Now, a vibrant and whimsical new mural adorns its wall thanks to a local artist.

Artist Chanel Harwick, also known as Nonfat Melk (@nonfatmelk), has been growing her local and online presence for a handful of years, taking Nonfat Melk seriously beginning in late 2020. After gaining her bachelor’s degree from UW-Eau Claire and her master’s degree from UC-Riverside, Harwick first worked with Racy D’Lenes Coffee House through Artfly Gallery back in 2021 after returning from California.

After contributing to Artfly and her work lining Racy’s walls alongside other artists’, Artfly’s founder and local artist Kelsey Wenberg reached back out to Harwick for the new project.

“Five murals and a dozen art markets (after my Artfly debut), Kelsey reached out to me about the opportunity at Racy’s. Of course, I agree to it,” she recalled. “Racy’s is an Eau Claire staple, and the thought of being able to contribute to the little community they’ve cultivated over the years excited me.”

Nonfat Melk’s prints, stickers, accessories, and other works are bright, playful, and fantastical, her style largely influenced by graffiti, graphic novels, and video games. The mural now inside Racy’s is a continuation of that style, also inspired by themes of class and environmentalism.

“I was given free rein with this project and I took that as an opportunity to lean into two newer ideas I’ve been playing with,” Harwick explained. “I’ve condensed these ideas into two key phrases: ‘When we’re gone, what will we leave behind?’ and ‘The future doesn’t have to be dystopian.’ ”

“I wanted to create something that portrayed an almost naive hope for the future.”

The robot barista depicted smiling at an onlooking wide-eyed cat and curious turtle (a nod to Racy’s resident shelled friend, perhaps?) now lights up a piece of Racy’s brown walls. Harwick said she took the coffee house’s low lighting and high ceilings into account for her design.

“I wanted to create something that portrayed an almost naive hope for the future,” she said. “I also wanted it to be grounded in its location, meaning that it couldn’t just exist anywhere, but that it purposefully only makes sense in the context of Racy’s. It’s a playful take on imagining a future Racy’s.”

Alongside her own website where she takes on freelance and commission work and sells products, the Nonfat Melk Etsy account has garnered more than 2,000 sales and hundreds of reviews. Currently, Harwick works as an editorial illustrator with Psych2go and is also illustrating a children’s book for a local author. By the end of this year, she also hopes to complete her first graphic novel.