Ron Davis Revs Up on Book Two: ‘Rubber Side Down’

read all about motorcycles through columns, memoirs, and other essays by E.C. author 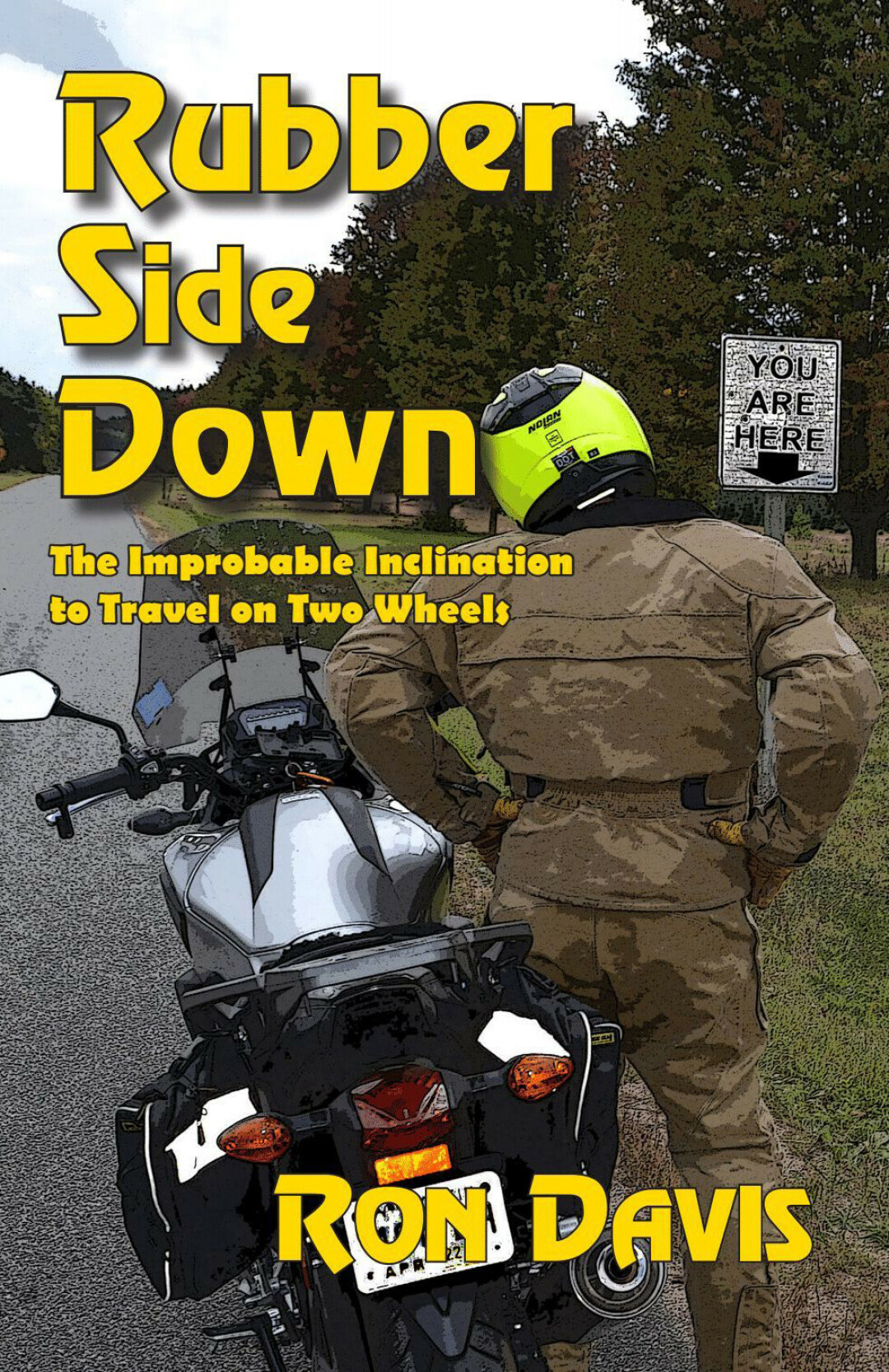 RIDE ON. Ron Davis released his newest book, <em>Rubber Side Down: The Improbable Implication to Travel on Two Wheels, </em>all about motorcycling. (Submitted Photos)

When Ron Davis mounts up on one of his motorcycles, he’s not just there to have a good time and burn some rubber: he’s ready to rev up and write. His new book, Rubber Side Down: The Improbable Implication to Travel on Two Wheels, is comprised of columns, memoirs, and other essays, takes readers on the road with him.

Why is it so improbable to ride a motorcycle, you might well ask?

“It really expresses the way I feel about it,” Davis shared. “When you look at motorcycling, there’s really no good reason to ride a motorcycle. I mean, you’re exposing yourself to the elements, it’s incredibly dangerous, and it’s not the greatest form of transportation. It’s improbable that so many people would be drawn to it. But, on the other side, there are some very special things about it that I think attract people to motorcycling, to keep them in the saddle, to keep them riding.”

Riders: read! But Davis assures those who haven’t chugged down highways on two wheels of their own that there’s still plenty to love and relate to. 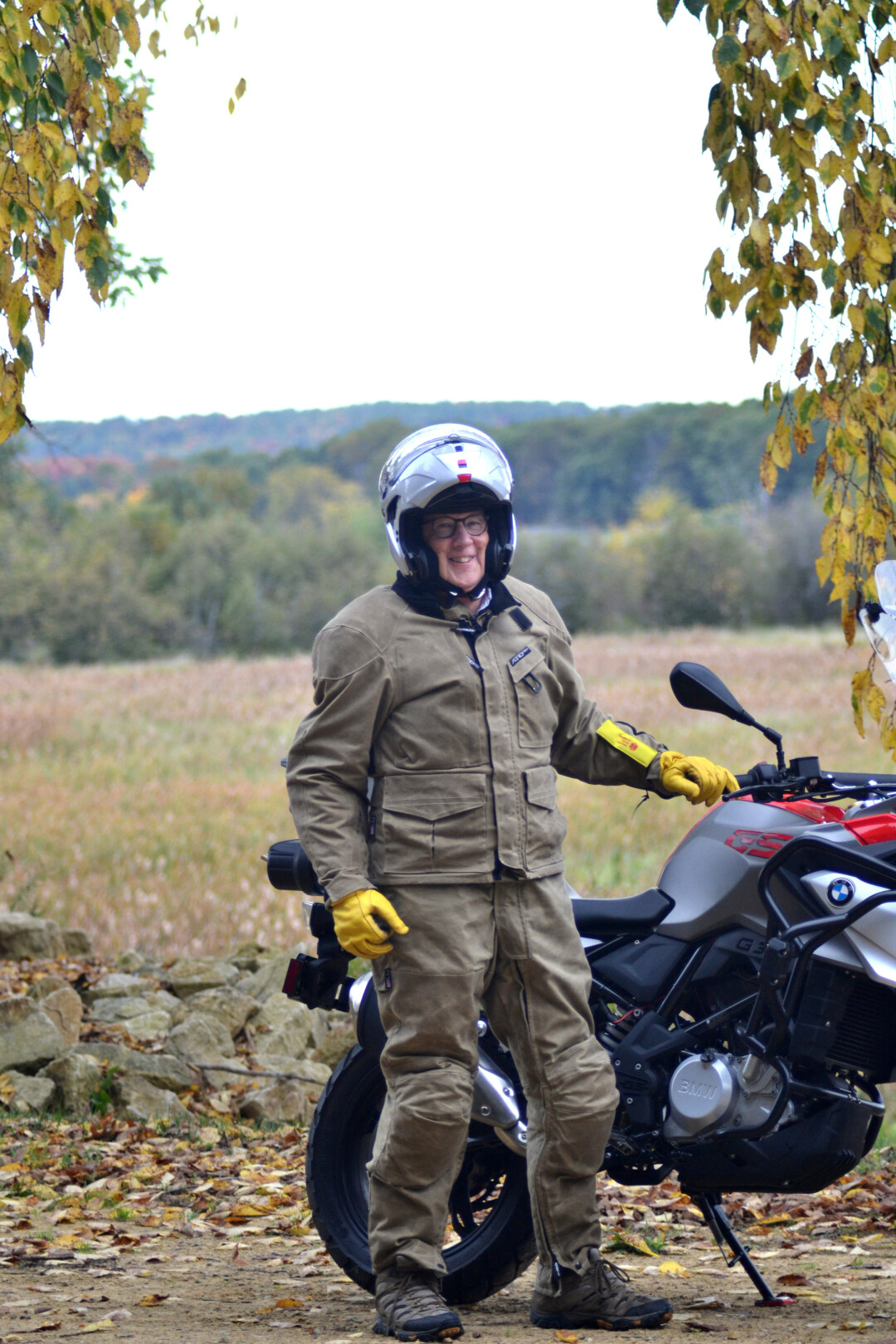 Ron Davis pictured with his motorcycle.

Over the years, Davis has made plenty of contributions to various motorcycle magazines and Wisconsin Public Radio, as well as a column for BMW Owners News.

“I got hooked into writing for motorcycle magazines, basically because I started writing reviews, and I ended up with a lot of free stuff,” Davis said.

After the reviews and free stuff, Davis had to get used to writing a regular column. Most everything you can say about motorcycles has been written, he said — so where could he innovate?

“I ran across a book by Peter Egan, who’s a motorcycle rider — and I’m by no means an expert motorcyclist, I haven’t ridden around the world or anything like that — but reading his book was kind of a revelation because he’s one of the preeminent writers when it comes to writing about motorcycles. The thing that struck me was that most of his stories are about the human side.”

Rubber Side Down, and its predecessor, Shiny Side Up, carry a lot of heart in their saddlebags.

“(Motorcycling) is improbable. But there’s enough there that keeps me coming back and lots of other people too,” Davis said.

Davis, a rider and a writer, knows there’s plenty out there on the road to see — but there’s even more when you ride back home.

“I just gave a copy of the book to my grandson, he’s only nine years old, but I feel like someday, he may look at that and want to know what his grandpa was like. That book reveals a lot of what I’m like and not so much about motorcycling.”

You can check out Rubber Side Down: The Improbable Implication to Travel on Two Wheels on Amazon, Barnes and Noble, Target, and The Local Store.