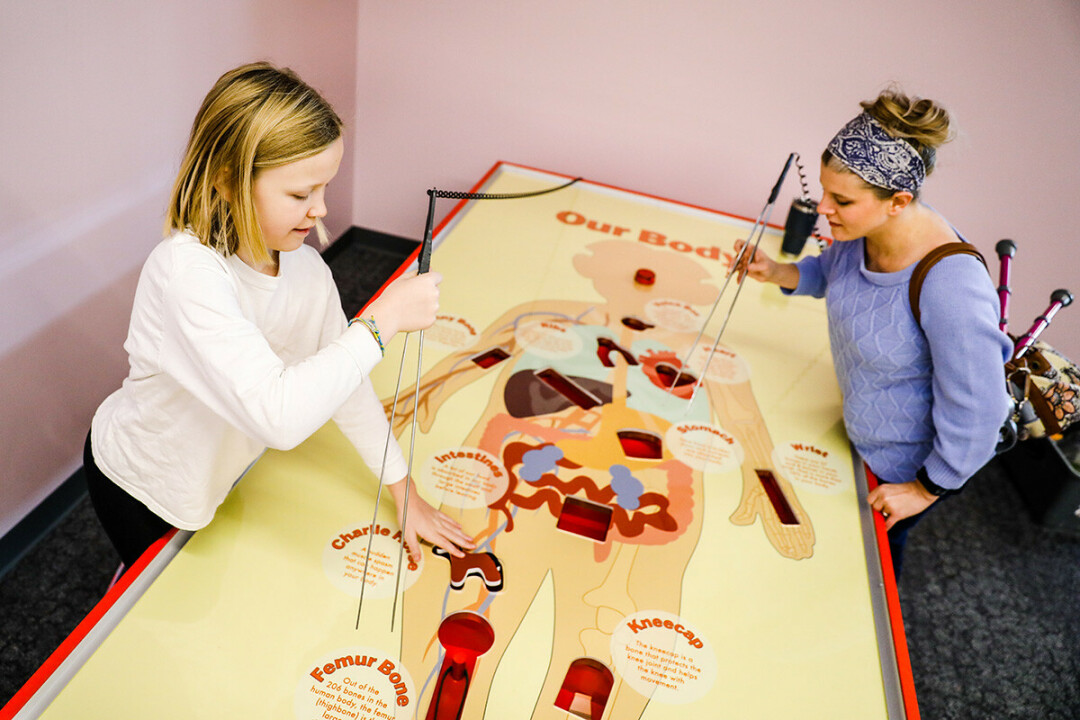 CHECK OUT WHAT'S INSIDE. Some kiddos and parents got a preview of the soon-to-open new Children's Museum of Eau Claire recently, including this enormous version of the game Operation.

As anyone who has experienced the cat-and-mouse game of hiding Christmas presents from children can attest, kids don’t always do well with anticipation. Frankly, a lot of adults don’t, either.

But several years’ worth of patience will finally pay off for local families when the brand-new Children’s Museum of Eau Claire opens in the new year (Jan. 2 for members, Jan. 9 for the general public).

The museum has been under construction for more than a year at 126 N. Barstow St., and plenty of folks young and old (this parent included) have gazed curiously up at its panoramic windows as it has taken shape. 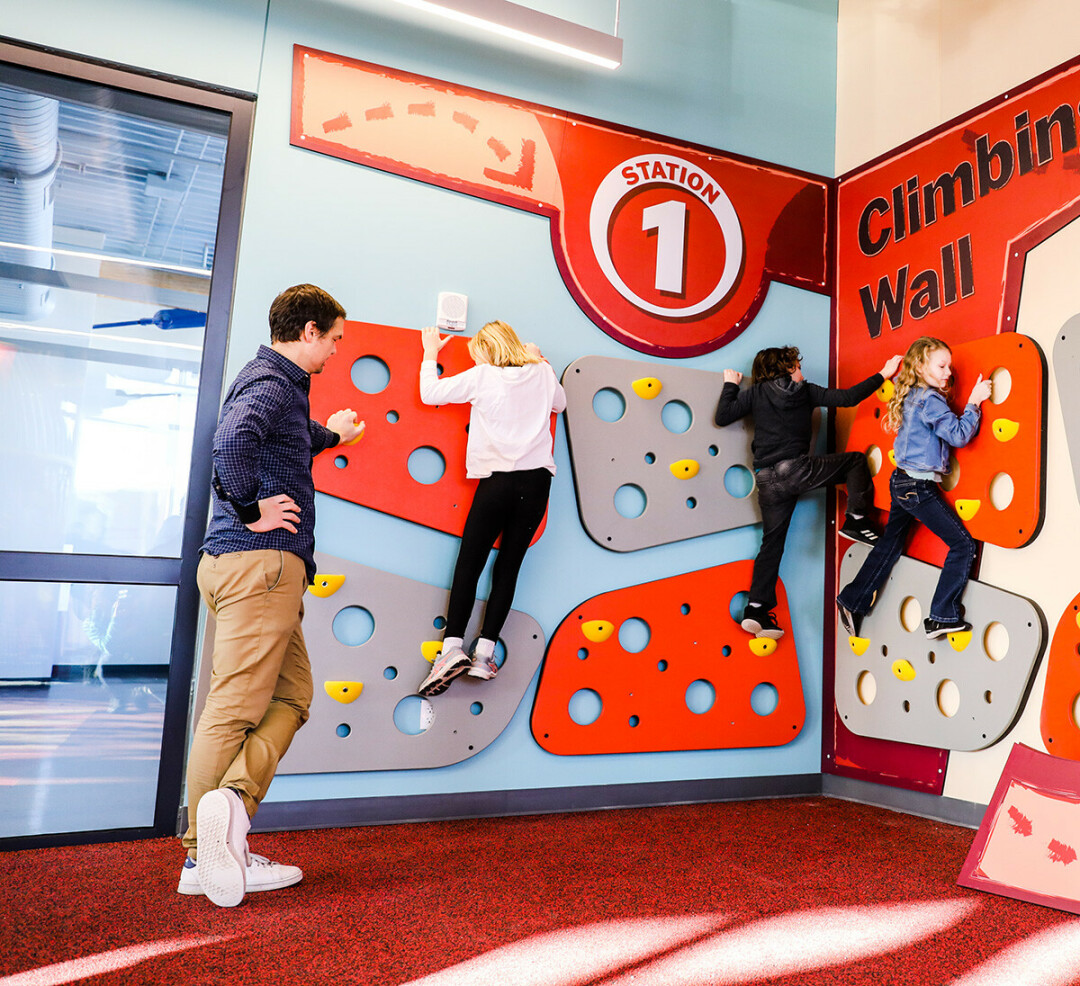 Now, as 2023 dawns, the final touches are being put on the museum and it’s poised to open to the public. It’s already received rave reviews from the few kids who’ve been able to venture inside – including museum CEO Mike McHorney’s two youngsters.

“The first thing we heard him say was, ‘Wow!’” McHorney said of his 2-year-old’s reaction to visiting. “That’s what we want every kid to experience.”

The new building replaces the original children’s museum, which opened at 220 S. Barstow St. in 2004 and closed in 2020 amid the the pandemic. Since then, it’s been reborn – albeit on a much smaller scale – through Play Spaces that popped up in Eau Claire, Menomonie, and Chippewa Falls. (The latter two will remain, while the E.C. Play Space closed in November in anticipation of the new museum’s opening down the street.)

The first thing we heard him say was, ‘Wow!’ That’s what we want every kid to experience.

CHILDREN'S MUSEUM OF EAU CLAIRE CEO, on his 2-year-old reaction to the new building

Visitors entering the two-story museum at the corner of North Barstow and Galloway streets will be immediately greeted by elements of the building’s unique architecture – notably the huge, exposed timbers that make up much of the structure’s frame, which are connected by steel ties painted a bright blue. The cheery colors, high ceilings, and plentiful, porthole-like windows give the place a warm, airy feel even in the depths of winter.

The 26,000-square-foot museum is only about 3,000 square feet larger than its predecessor, McHorney said, although it feels much larger, in part because the previous museum was spread across three floors.

Families familiar with the old museum will find many of the educational attractions they recognize – and many they don’t. There’s a farm, a food truck, and a farmer’s market; an auto shop with a car that little mechanics to work on; and a toddlers-only area. Bitty City has been revived – complete with a drive-through credit union and a post office – and so has Water Works, although in a refashioned form that focuses on the natural world, complete with cattails and a simulated rain cloud. 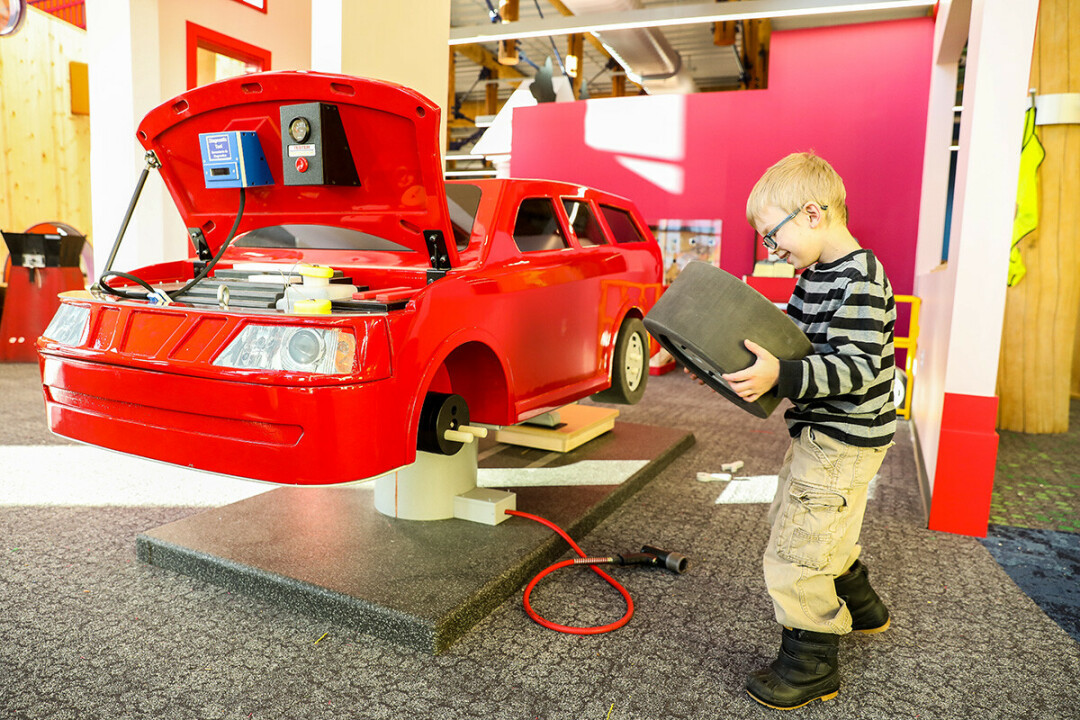 Nearby there’s a fire truck and a towering set of tubes that will blow colorful scarves into the air.
A broad set of stairs (as well as an elevator) transport visitors to the second floor, much of which is open to the floor below thanks to a balcony, giving parents a birds-eye view of their kiddos. Nearby, slightly behind the scenes, is the home of the Peace Tree Child Care, which will operate a preschool at the museum that will initially serve about 36 children.

Second-floor exhibits include a set of “old-fashioned” objects – including a rotary phone and wooden shoes – that they can learn about; an oversized microscope; a fossil dig to teach them about animals that lived in Wisconsin eons ago; and a campsite featuring a small camper, a campfire, and the familiar fishing boat.

Prime space is devoted to a new exhibit – Shape Up! – which offers multiple ways for kids to get moving, including a Rocket Slide (made in homage to one that once graced Eau Claire’s Carson Park), a long-jump, a climbing wall, and more, plus a way for kids to measure their heart rates between activities. Thanks to massive, curved windows, the spot provides a scenic view of much of downtown Eau Claire and beyond. 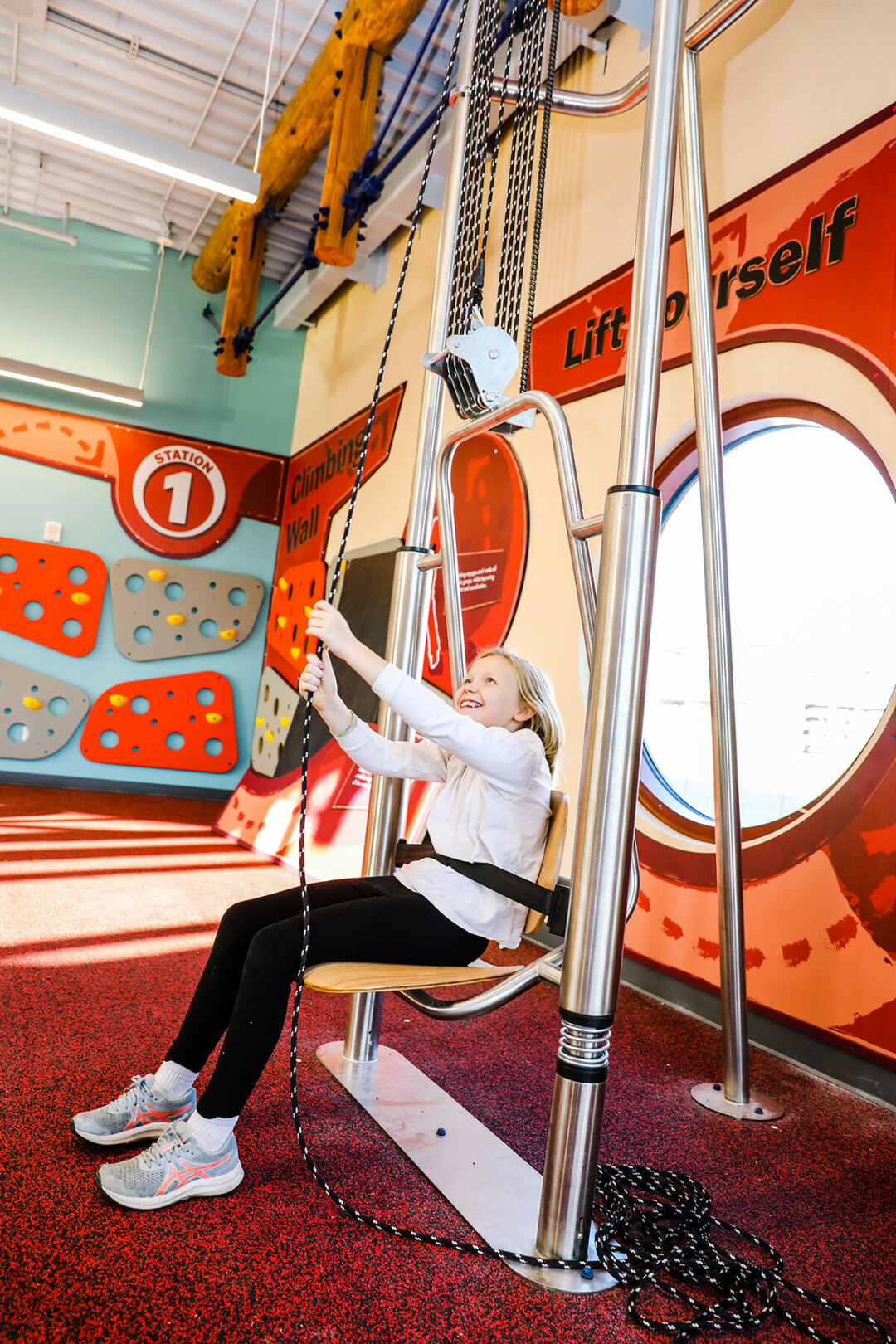 Nearby is a reimagined version of the old Body Smarts exhibit, which allows kids to crawl in through a giant mouth and make their way through the human digestive system. This time, Body Smarts is complimented by a giant brain kids can climb inside, a digital skeleton that mimics their movements, and an oversized version of the game Operation.

Is anything missing? Unlike the previous museum, this one won’t have a gift shop. Instead, kids will be able to sit down in a “Make Shop” filled with tools, fasteners, and materials, and will be able to make their own creations – for free. 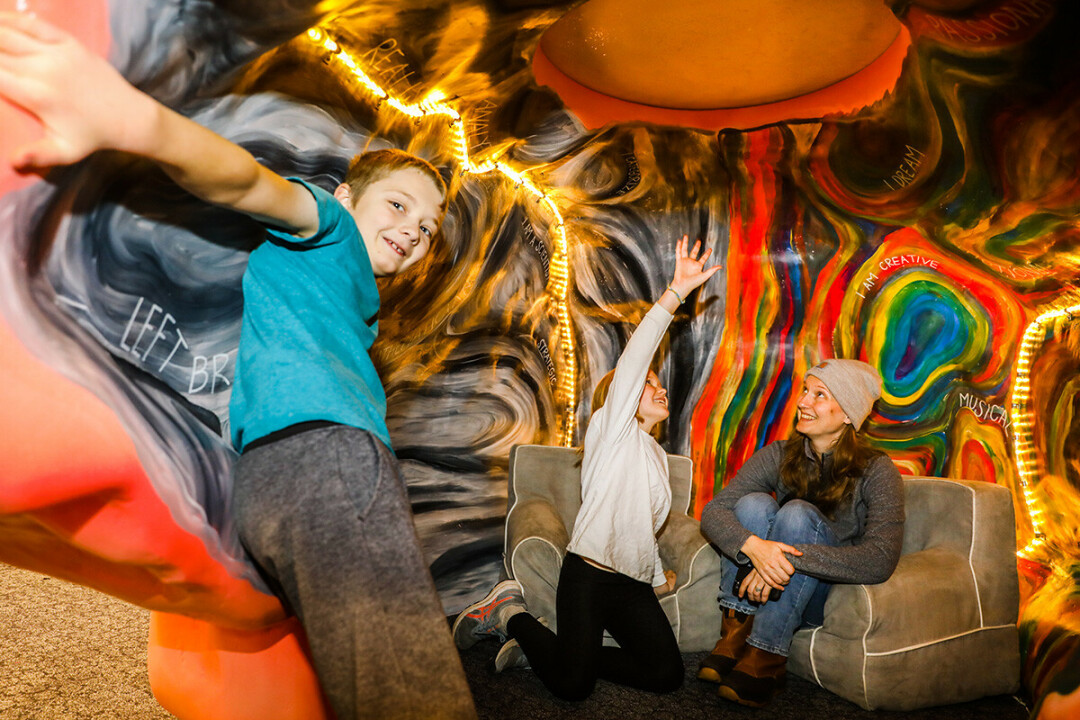 “It’s more of an experience, less of a retail spot,” McHorney said. Plus, not having a gift shop at the exit means fewer meltdowns from kids who demand a new toy on their way out.

The building cost $12.5 million, all but $2.9 million of which has been raised. The effort has been funded through donations, new market tax credits, and grants, including a nearly $500,000 state Public Service Commission grant, which ensured that the museum will operate on 100% renewable energy with the help of rooftop solar panels and a geothermal heating system.

Learn more about the Children’s Museum of Eau Claire, including membership plans, at childrensmuseumec.com. 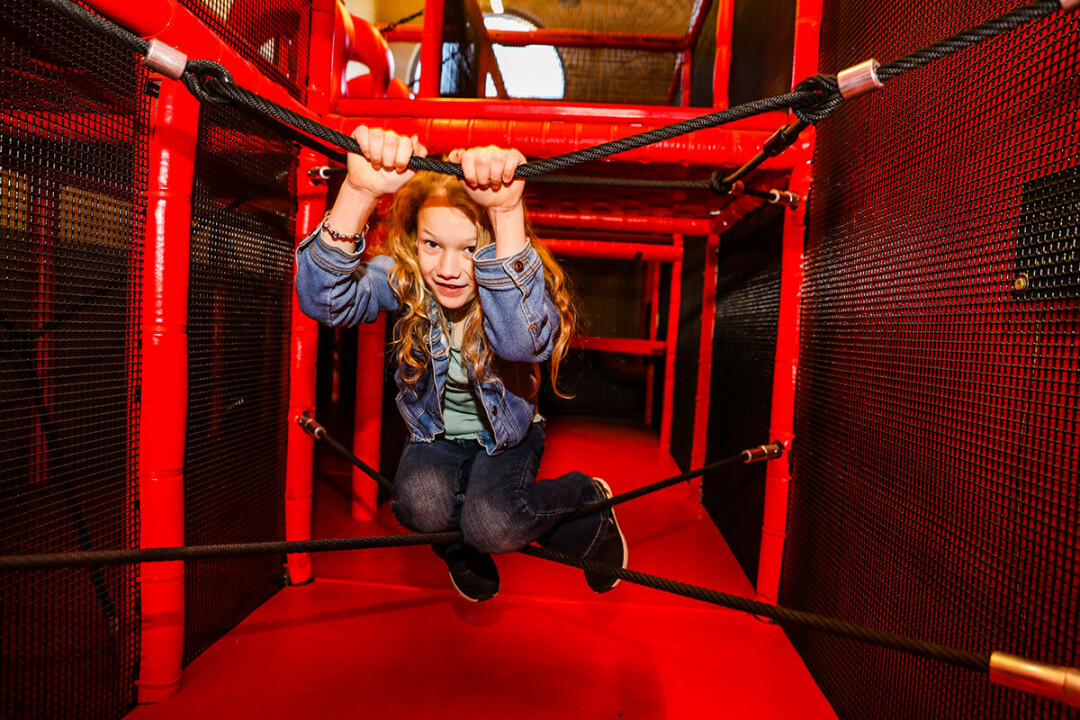