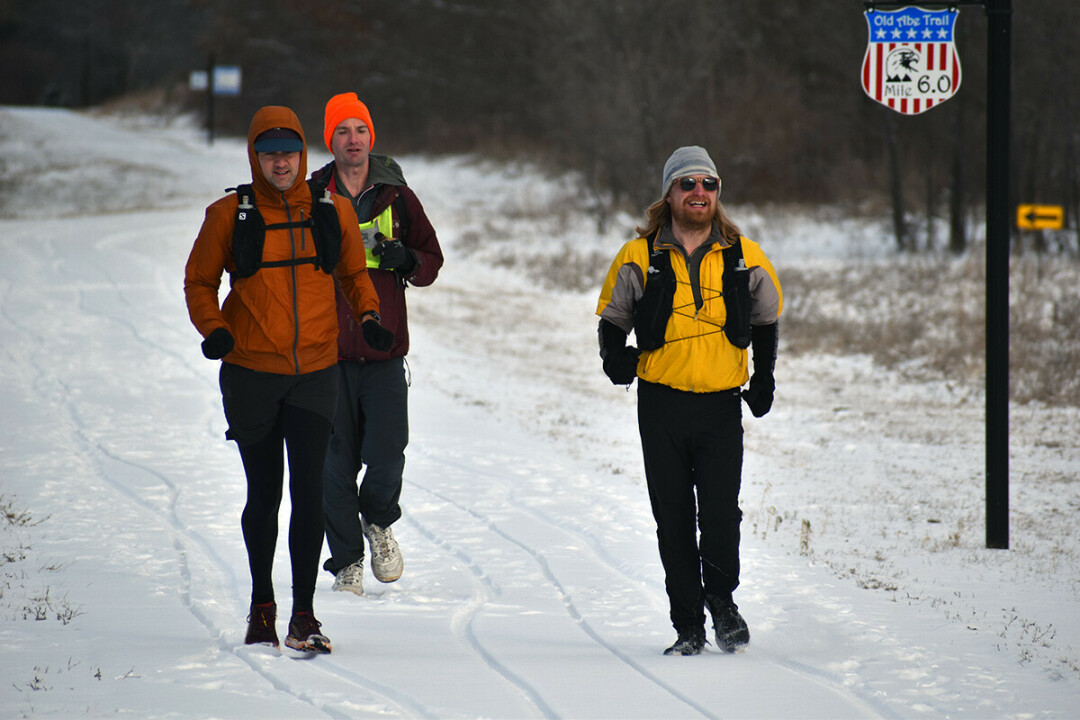 NEVER ALONE. Three runners took part in last year's Positive Vector marathon: They were, from left to right, Zac Barnes, Bjorn Hagstrom, and Davin Haukebo-Bol. Positive Vector is planning a marathon from Mondovi to Eau Claire on Dec. 17 to raise awareness and funds for mental health. (Photo by Bjorn Bergman)

According to the National Alliance on Mental Illness-Chippewa Valley (NAMI-CV), 1 in 4 adults and 1 in 10 children will be diagnosed with a mental illness in the Valley each year. These diagnoses can range in severity across individuals, and often it is easy to overlook signs of mental distress. While an isolating feeling for the individual, mental illness affects millions across the globe.

To raise awareness a local organization – Positive Vector – will host a marathon from Mondovi to Eau Claire on Saturday, Dec. 17.

“The goal is to raise awareness and funds for mental health in the Chippewa Valley and remember the impactful (but far too short) legacy of a dear friend we lost to suicide, Corey James Hilber,” wrote Positive Vector organizing committee members Davin Haukebo-Bol, Zac Barnes, and Drew Kaiser. “It’s with his legacy in mind that our run will commence rain, sleet, or shine.”

With the route combining multi-use trails and rural roadways, hitting Rock Falls halfway through, runners can expect a beautiful view and an enthusiastic community of support. Runners will finish on Water Street in downtown Eau Claire and have the option to run either the full or the half marathon course.

A vector is a combination of magnitude and direction.

Our goal is to support those doing great work in mental health while providing an optimistic (positive) direction for our community.

“In addition to calling attention to society’s mental health crisis, Positive Vector will be asking runners to raise funds for the NAMI-CV,” they said. NAMI-CV has been in operation for 11 years and joined to help educate on mental illness and raise awareness. “Last year, our three runners and their supporters raised $3,383. … This year, we seek to attract more runners and make an even larger financial impact on this fledgling organization.”

The name “Positive Vector” was inspired by their friend’s love for math, with a little more meaning added. “A vector is a combination of magnitude and direction. Our goal is to support those doing great work in mental health while providing an optimistic (positive) direction for our community,” they explained.

“Corey was many things to many people, but he was a friend to all who knew him,” his friends said.

If you’re struggling with mental illness or know folks who are, there are people who care about you. Please confide in others and seek support if you need it.

To learn more, donate, or sign up for the run, visit gofundme.com.