A NIGHT IN THE GARDENS: The Nunnery to perform latest album live in first-ever performance 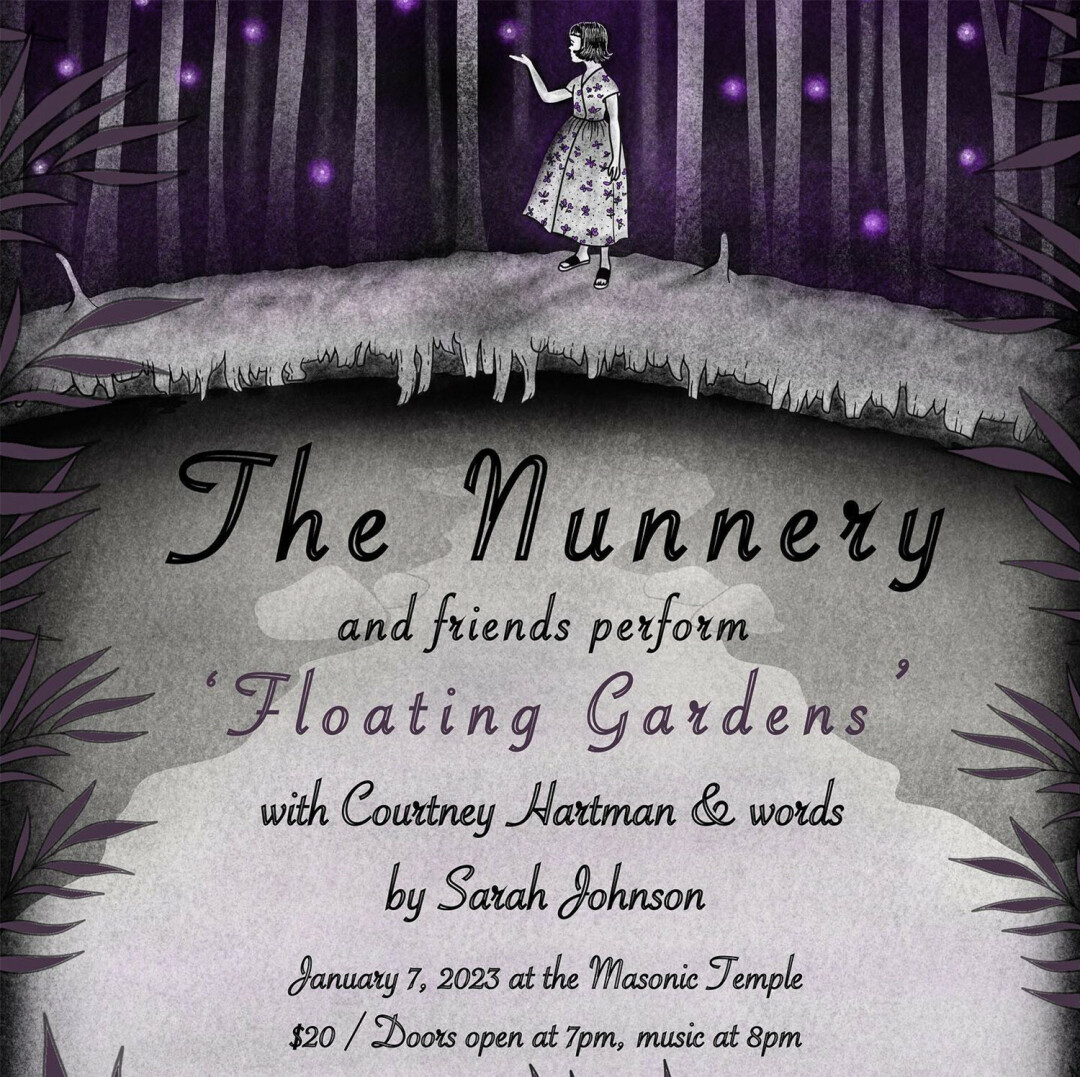 FRIENDS AND FLOATING GARDENS. Local musicians are pulling together to throw a flourishing performance for The Nunnery's first-time live performance of her latest album "Floating Gardens" in the new year. (Photos from The Nunnery's Facebook)

Sarah Elstran, performing under the stage name The Nunnery, released her latest album “Floating Gardens” on Jan. 14, 2022, and has announced the first-time live performance of it is coming in the new year.

At Eau Claire’s Masonic Temple on Jan. 7, 2023, The Nunnery and friends are inviting folks to a  wonderful night of performances and atmosphere. “I want to show or give Eau Claire an experience that they haven’t experienced before,” Elstran said. “A fresh newness, especially in winter with this lush, hopeful, and warm album."

The Nunnery is known for her melodic looping that is influenced by the very sounds and sights in Elstran’s own life, somewhat comparing her music to the style of other bands like Enya and Cocteau Twins. The inspiration and workshopping for “Floating Gardens” came from the initial years of the COVID-19 pandemic and the two years following its peak,  Elstran spending that period editing and reworking her album despite how life had changed 0 and while her two kids.

Elstran had always been interested in music, her history and interest in performance originating back to when she was 13 years old. The Nunnery started as a project for Elstran in 2014 out of Minneapolis following an accident where her guitar was stolen and she had to transition to stripped-down vocal and percussion by necessity. Formerly born and raised in Eau Claire, Elstran came back after 8 years of traveling and touring both in and outside of Minneapolis, both to settle in and raise her kids and also to live in a place where freelance art is better supported. The Nunnery + fellow musicians performing at the Jan. 7 show.

Elstran is holding her latest album’s first-time performance at the Masonic Temple purposefully, having chosen the venue due to its circular room, a unique physical space that makes the idea of being with others more prominent. Along with a performance of The Nunnery’s “Floating Gardens”, Elstran will be performing alongside and with other artists like Staš Hable on drums, Courtney Hartman on guitar, and Lydia Park on cello.

Staš has been friends with Elstran since they met in high school, and Lydia is an excellent cello player who moved to Eau Claire during the pandemic. Elstran met Courtney randomly when she was performing at a Livestream.

The idea of a collaborative live performance came into being after the musicians began jammin’ out together for fun. Along with an introductory solo performance by Courtney Hartman and spoken word by Sarah Johnson, Brian Joseph will be working on sound mixing to further create an unforgettable performance. Erik Elstran will be supporting the show with a series of live visuals to create an immersive environment.

Join The Nunnery and friends on Saturday, Jan. 7, 2023 at 7pm at the Masonic Temple in downtown Eau Claire at 616 Graham Ave. for the special performance. For tickets, head to https://thenunnerymusic.com/shows.