Em Menz and Sue Orfield team again to perform ‘All Roads Lead to Home,’ aiming to foster and thank the community in Menomonie 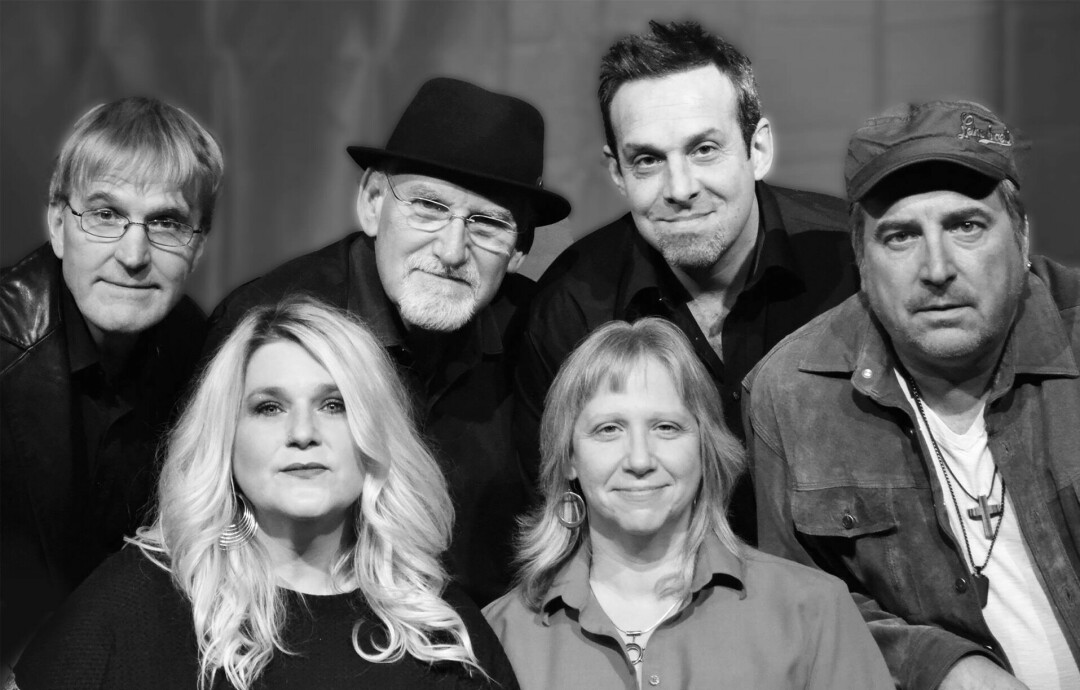 ALL ROADS LEAD TO HOME. The local ensemble is returning for their third year to warm the Mabel Tainter and audiences' hearts once again this holiday season, this time with the community of Menomonie at the heart of its theme. (Photo via Facebook)

Vocalist Emilie Menz, owner of LaDeeDah in Menomonie, and outstanding local saxaphonist, Sue Orfield, are coming back to Menomonie’s historic Mabel Tainter theater for a holiday show this December, but this time around, there’s a close-to-home theme backed by original arrangements.

Menz and Orfield will be joined by Randy Sinz (bass, vocals), Dave Schrader (drums, vocals), Jon Menz (piano), and Michael Shlenker (guitar, vocals) for their “All Roads Lead to Home” holiday show on Dec. 16 and 17. Menz said for the group’s third holiday performance, she wanted to do something different and in celebration of what she had witnessed in their small-town home: real, genuine community.

this town does not shy away from hard work. not a chance.

THIS TOWN DOES NOT SHY AWAY FROM THE WORRY EITHER. THESE ARE TRUE, SALT-OF-THE-EARTH FOLKS WHO CARE ABOUT THEIR TOWN AND FIGHT FOR IT IN THEIR OWN WAY.

OWNER OF LADEEDAH IN MENOMONIE

“What I have learned, more than any lesson thus far – and holy moly Batman, has there been a lot of lessons – is that a little big town like (Menomonie) is all about its people, and its people make all of these things thrive,” Menz explained. “This town does not shy away from hard work. Not a chance. This town does not shy away from the worry either. These are true, salt-of-the-Earth folks who care about their town and fight for it in their own way.” 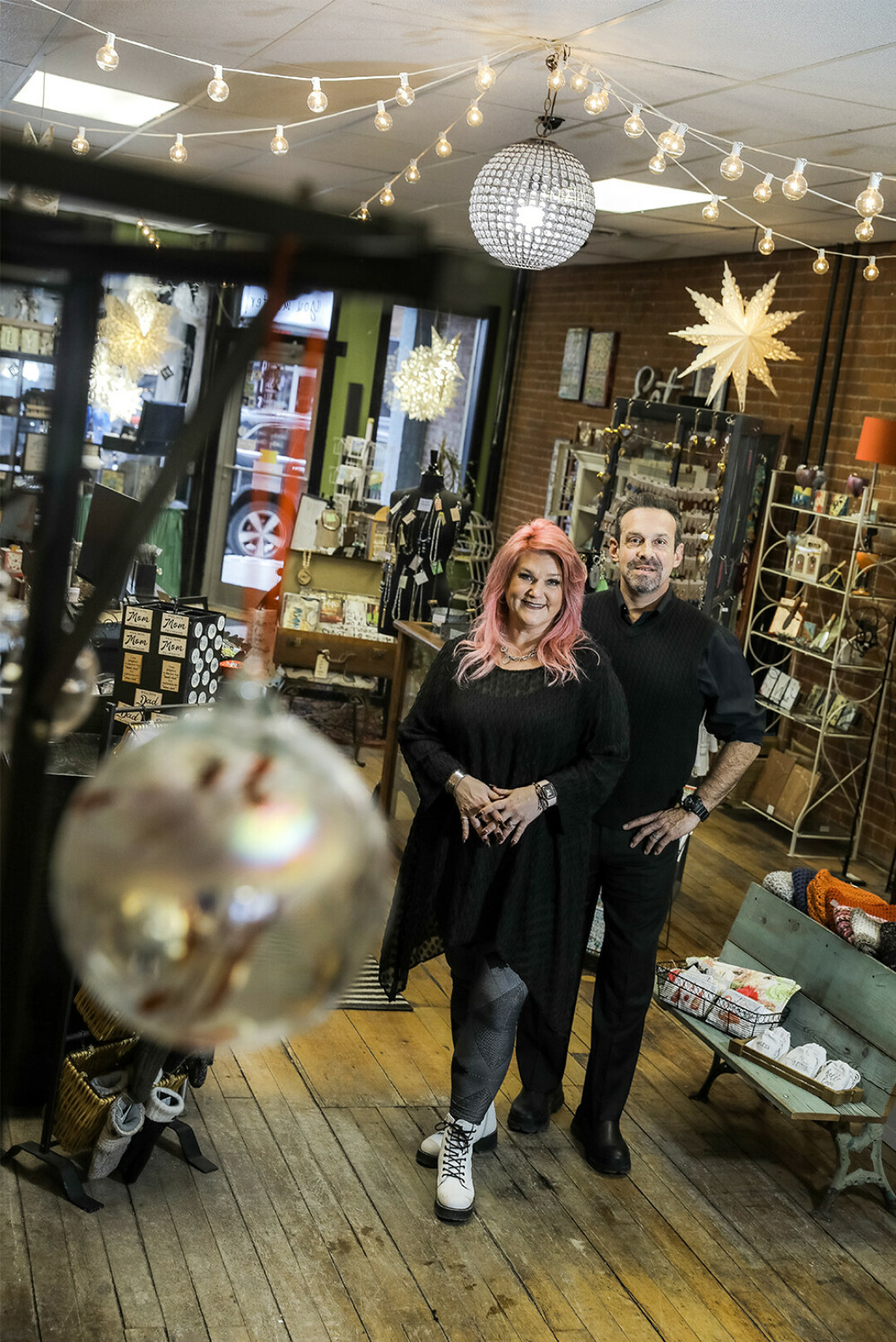 Emilie (left) and her husband Jon (right) in LaDeeDah. (Photo by Andrea Paulseth)

Menz made the move from the Twin Cities area to Menomonie about seven years ago and hasn’t looked back since. She lovingly calls Menomonie a “little big town” since regardless of its size, “it has the charm and stamina of the big guys.” Last year, news broke that LaDeeDah was going to close its doors forever, and it just didn’t sit right with her. She and her husband bought LaDeeDah and have continued to run the business since it reopened in February, right on downtown’s Main Street.

With a unique small biz owner perspective following her years of settling into the area, Menz just couldn’t shake the purpose that ran through her, inspired by the little big town. Orfield and Menz have loved working together since they first partnered up a handful of years ago to bring their music to the Mabel Tainter during the holiday season, and this year, a special original song, “All Roads Lead to Home,” will be debuted.

“I thought it was important to remind people of the wonderful place they live, that it matters, that they matter to the town,” Menz said. “It’s a song that calls us all back, no matter where we are; all roads lead to home.”

As she spoke of the area’s winding rivers, supper clubs and watering holes, family-run businesses, public universities, and more, a clear adoration and admiration for our slice of Wisconsin shown in her words. Mostly, she and the musical ensemble just want to pour back into the community they love so dearly.

“When we all get together, there is nothing like it. We have the greatest time (and) bring the absolute best of ourselves because it’s all about the holidays, our town, our people. All charm, all joy, all the feels, and boy oh boy, we need it. Every single one of us.”

“All Roads Lead to Home” will feature tunes from the ensemble – influenced by jazz, country, New Orleans blues, and soul music – ranging from their original arrangements of classic holiday songs, traditional tunes like “Baby, It’s Cold Outside,” “Silent Night,” and more.

Orfield has been a longtime musical favorite in the Chippewa Valley, an incredibly accomplished artist who calls our area home, though she's toured numerous times around the country and recently returned from a tour in Europe.

“The fact that she is in our backyard is mind-boggling and I am spoiled rotten that I am allowed to perform with her,” Menz added. “Me? I’m not such a big deal. I have been singing for a good long time; I have written music, produced, toured, you name it. I’m a total sass. ... I’ve been named The Divine Ms. Em (and) ain’t it the truth, through and through.”

Tickets are $25 each to see the duo and the full ensemble rock out on stage. The show will be offered on Friday, Dec. 16, and Saturday, Dec. 17, with both performances beginning at 7:30pm and ending at 9:30pm. This is a can’t-miss show that’ll hit right in the hometown feels, folks.