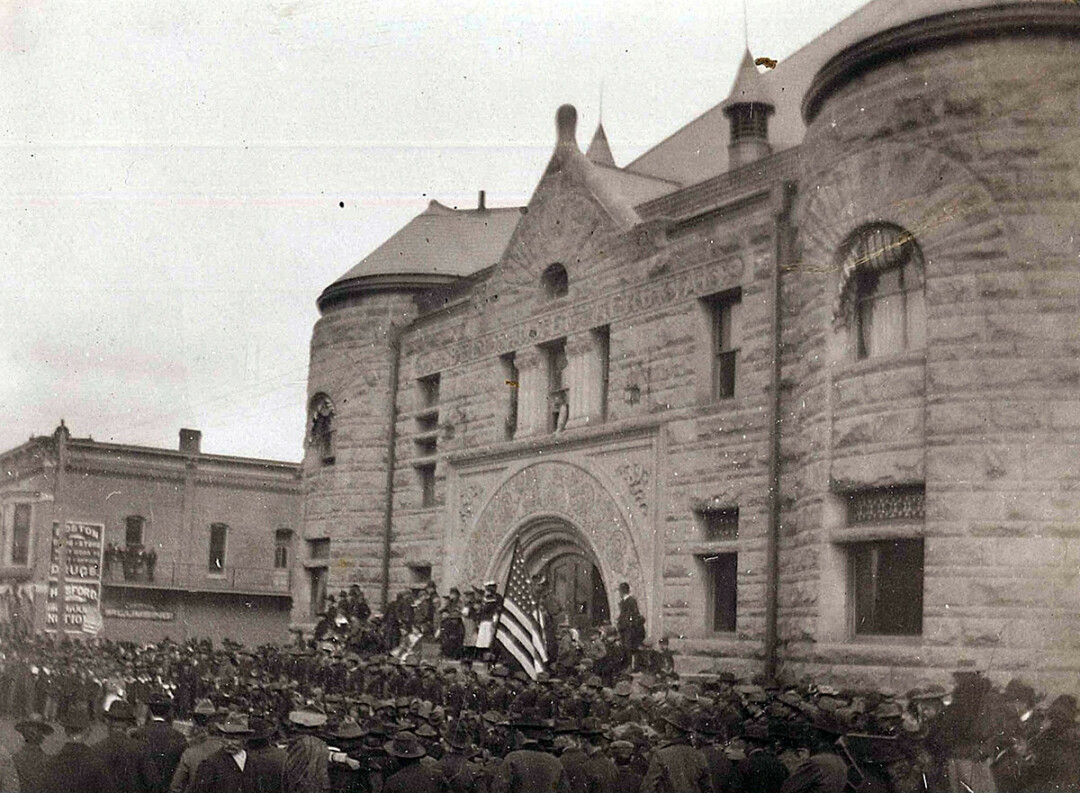 A community send-off for Company H, which included Cpl. Charles V. Cummings, was held April 27, 1898, on Main Street in Menomonie on the steps of the Mabel Tainter theater. Sixty-eight soldiers went off to war. (Submitted photo)

A special ceremony to honor the sacrifice of a Menomonie native and alum who graduated more than 125 years ago will highlight Veterans Day events at UW-Stout.

A ceremony at 11am Friday, Nov. 11 – Veterans Day – will be held in the Memorial Student Center, in Huff’s Lounge on the first floor. A plaque with a photo of Cummings will be added to the university’s memorial wall to fallen service members. A livestream of the event also will be available. 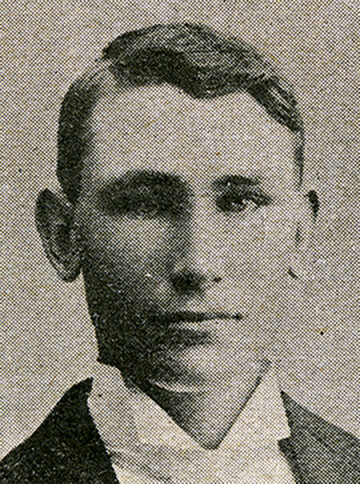 Cpl. Charles V. Cummings, a graduate of what is now UW-Stout, died while serving in the Spanish-American War in 1898. (Submitted photo)

Cummings is the 45th alum – 43 students and two staff members – who died serving their country to be honored since the wall was dedicated in 2013.

University Archivist Heather Stecklein conducted initial research into Cummings and in 2021 verified that he was an alum after finding names of graduates from 1892 to 1905. However, she didn’t have a photo of him; all other plaques on the wall include photos.

This past spring, student DJ Walker began a work-study research experience on Cummings’ unit, U.S. Army Company H of Menomonie. Stecklein asked Walker to keep an eye out for a photo of Cummings.

“A few weeks into the internship, DJ walked into my office with the newspaper supplement that included Cummings’ image. It was an archival miracle,” Stecklein said.

Walker’s research on the history of Company H, which began as the Ludington Guard militia and was renamed Company A in 1921, includes a historical display outside the entrance to Archives on the fifth floor of University Library.

“In the process of researching the unit's early history, I came across a newspaper article that discussed members of the unit who died while serving in the Spanish-American War. There were photos of some of the men, including one of Charles V. Cummings,” Walker said.

“I am extremely excited that on this Veterans Day we will be able to give proper recognition to him, as UW-Stout has done for many of its other alumni, for his service and sacrifice to this country. I am fortunate to have played a minor part in this process and am thankful to so many other people, like Heather Stecklein, who have made it a reality,” he added.

Walker, from Menomonie, is a senior majoring in applied social science with a minor in military leadership as part of his involvement with the Northwoods Battalion of UW-Stout’s Reserve Officers’ Training Corps program. 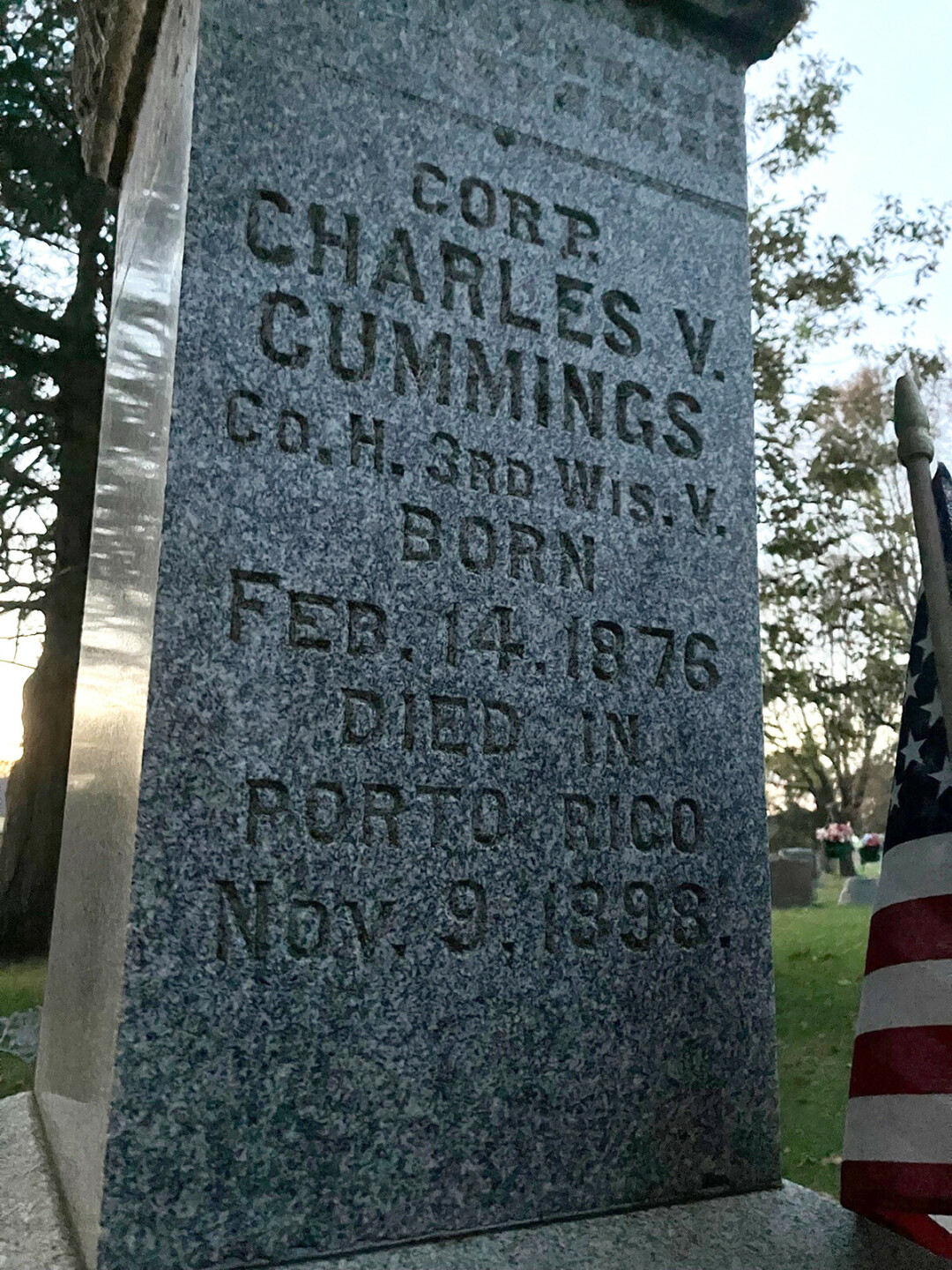 Cpl. Charles V. Cummings is buried in the Forest Center Cemetery in the town of Spring Brook, southeast of Menomonie. (Submitted photo)

Cummings was valedictorian of his 1895 Stout class. Classmates, who called him “Charley,” predicted he would become a professor.

Cummings’ body was returned by steamship and train to Menomonie, where members of Company H, the Ludington Guard Band and community gathered. He is buried in Forest Center Cemetery in the town of Spring Brook, southeast of Menomonie.

“Every individual that we recognize in the Stout Hall of Heroes is memorialized as a loss to our entire campus community. While our nation and our liberties are protected by their sacrifices, the personal losses that these individuals and their loved ones have experienced is staggering,” Stecklein said.

“These absences echo throughout the continuum of our campus. As long as we have a Stout community, we need to reflect on those who have left us in an effort to sustain our freedom and security. It is an honor to identify and recognize these individuals,” she added.

Stecklein will speak at the ceremony, along with Darrin Witucki, student centers director. Chancellor Katherine Frank will provide opening remarks.

To inquire about veterans who could be added to the memorial wall, contact Stecklein at  steckleinh@uwstout.edu or (715) 232-5418.

The Memorial Student Center is named in honor of those from the university community who died as a result of combat, disease or accident while serving in the U.S. military during times of war or crisis.

The current student center opened in 1985. The engraved stone was saved and can be found outside of the lower level, south entrance of the building, near the memorial wall.