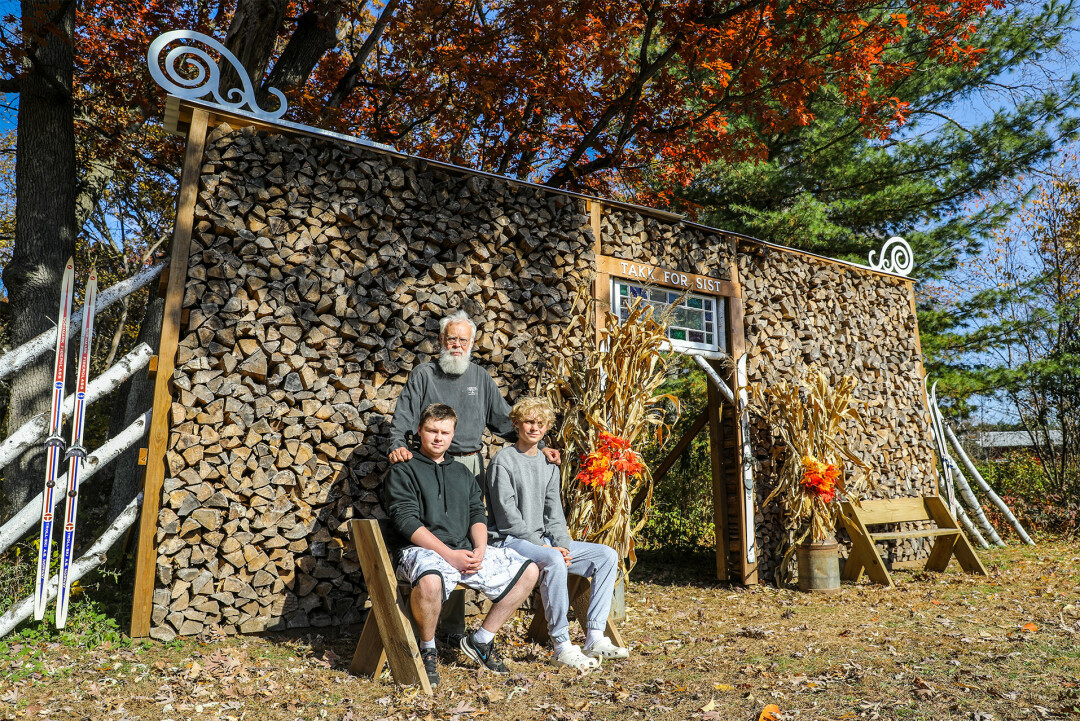 WOODN'T YA KNOW. After being inspired by a book, Thomas Hofslien and his grandsons have created two large works of wooden art, creating memories to last a lifetime – and hopefully inspiring others.

Local Thomas Hofslien has long stayed connected to his Norwegian heritage through family get-togethers and his own research into Norwegian woodwork, and in the last handful of years, he has brought his grandsons into the realm of woodworking too.

Inspired by a book he purchased in from The Local Store, Norwegian Wood by Lars Mytting, Hofslien realized there was far more he could be delving into than he already had been in his woodworking. “The author discusses not just factual things about how to cut wood, but it’s more than that; for people that would look at this book closely, I think they might notice how he even talks in a poetic fashion about (woodwork),” Hofslien said. “He quotes Thoreau, saying ‘Every man looks at his woodpile with a kind of affection.’ The more I thought about it, I thought, ‘Yeah, I can see that.’ It’s hard work, the labor of splitting wood, and there’s an element of truth in that affection.”

He approached his youngest grandson three years ago after reading Norwegian Wood and said he thought it could be a unique project for them to give a go, and over a weekend of work, the duo recreated a fish-inspired design they saw in the book.

“The author discusses not just factual things about how to cut wood, but it’s more than that; for people that would look at this book closely, I think they might notice how he even talks in a poetic fashion about (woodwork).” 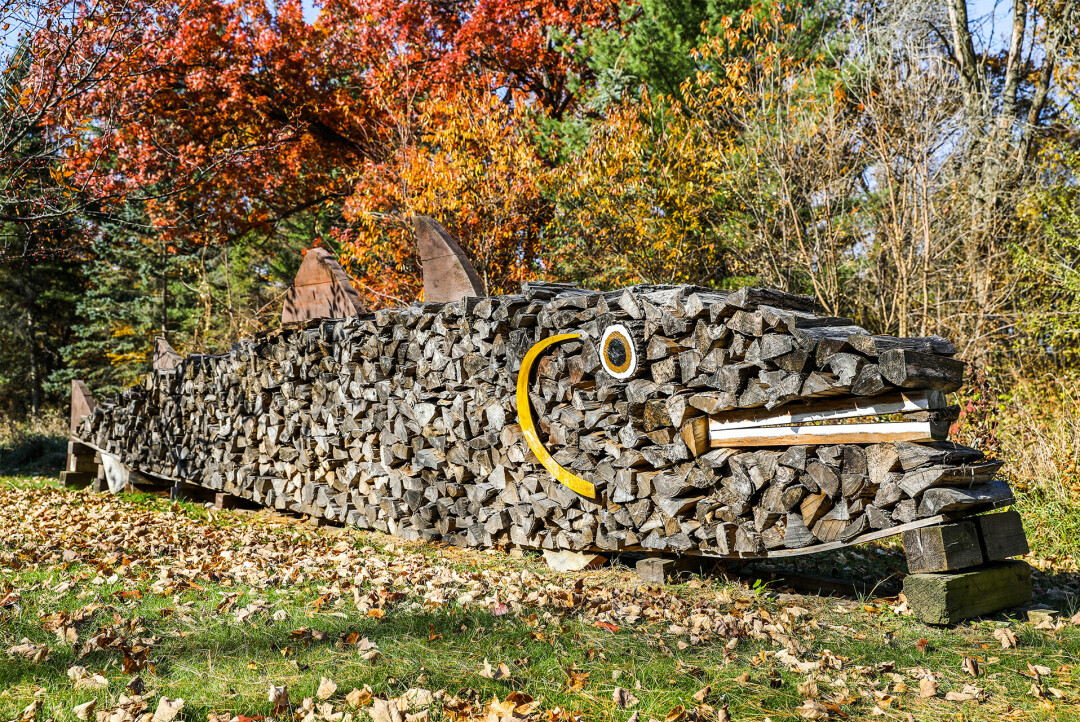 “In the last year or so we got my other grandson involved and decided to make something larger,” Hofslien said. “I just sketched out an idea on a piece of paper, we looked at it and thought some logistics through, and it sort of came together after that.”

Hofslien recalled the trio enduring some goof-ups and making adaptations to the design once they got started. “The whole point was just to enjoy this experience together, and even this year, we ended up making a couple tweaks to it again just for fun.”

Hofslien said there was a sort of levity to the mistakes and reworking they ran into while working on the project, ultimately taking several weekends to complete. Embedded into the front of the wooden “house” is a Norwegian phrase that goes back generations in Hofslien’s family.

“I have memories of my grandmother and uncles, who spoke Norwegian, and whenever we’d leave after visiting they’d say ‘Takk for sist,’ ” Hofslien recalled. “Which meant ‘thanks for the visit.’ So, that’s what I put on the house. In our case, it’s for people, sure, but I was also thinking it’s for all the wildlife that we have in our neighborhood and in our 8-10 acres of woods behind our house.” 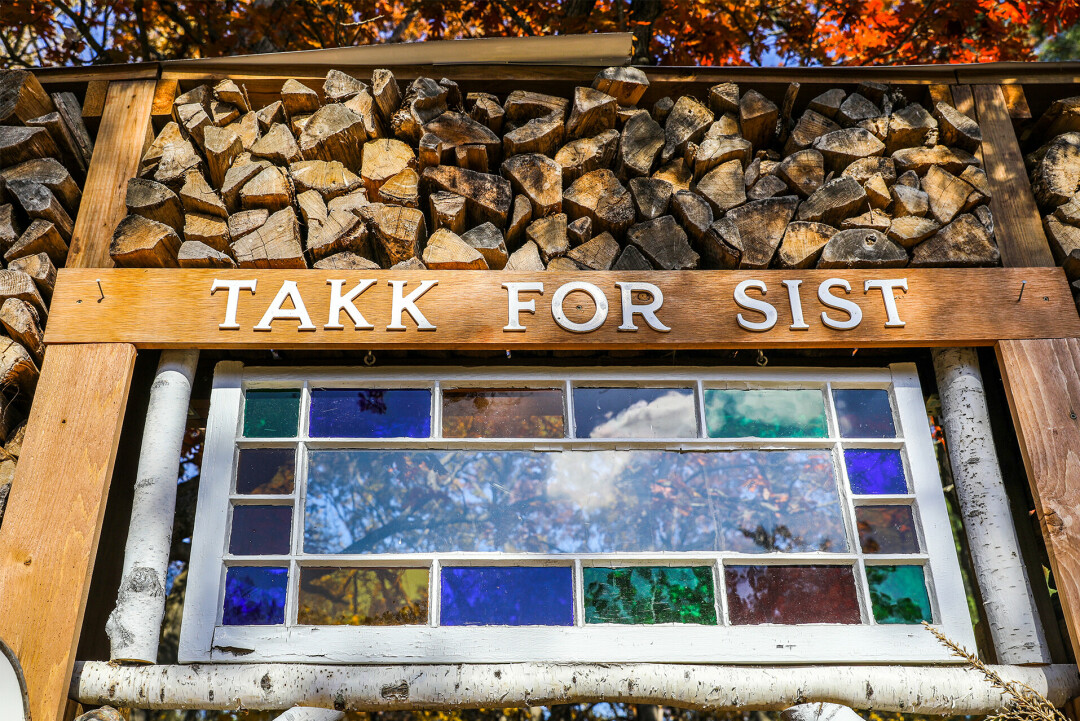 At 81 years old, Hofslien has grown to further appreciate and emphasize the importance of continuing to learn and experience new things, and that idea is woven deeply into the family woodworking projects. Hofslien himself creates handcrafted Norwegian-style skis using traditional hand tool methods, a skill and passion he learned from Midwestern institutions like the Norwegian American Museum in Decorah, Iowa, and the North House Folk School in Grand Marais, Minnesota.

He’s encouraged his grandsons to truly engage with life, absorb and work hard in their studies in school, and keep creating memories much like the ones they’ve created thanks to their woodworking. “I don’t mean to overdramatize it or make it more than it is, but it’s the type of thing you can learn to do, and can do with kids or grandkids,” he said.

In sharing Norwegian Wood with a visitor, flipping through pages and highlighting some of the creators standing near their wood art, Hofslien said he hopes more folks will have their imaginations sparked by their wood art. The wood house standing still outside his home has snagged people’s eye since it was created, with folks often stopping to take photos of it.

“YOU HAVE TO JUST IGNITE THE IDEA, AND THAT‘S WHAT I‘M HOPING TO DO.”

“I mean, look at that,” Hofslien said, showing some of the book’s photographs. “They’re happy with what they’ve created, their imagination gets on board, and you can see how fun it is. You have to just ignite the idea, and that’s what I’m hoping to do.”

Travel less than half a mile southeast from Kavhi Coffee on Deerfield Road in Eau Claire and you can drive past and see the wooden house art for themselves.