at just 300 square feet, The Waiting Room is a cozy new spot to grab beer with your buds 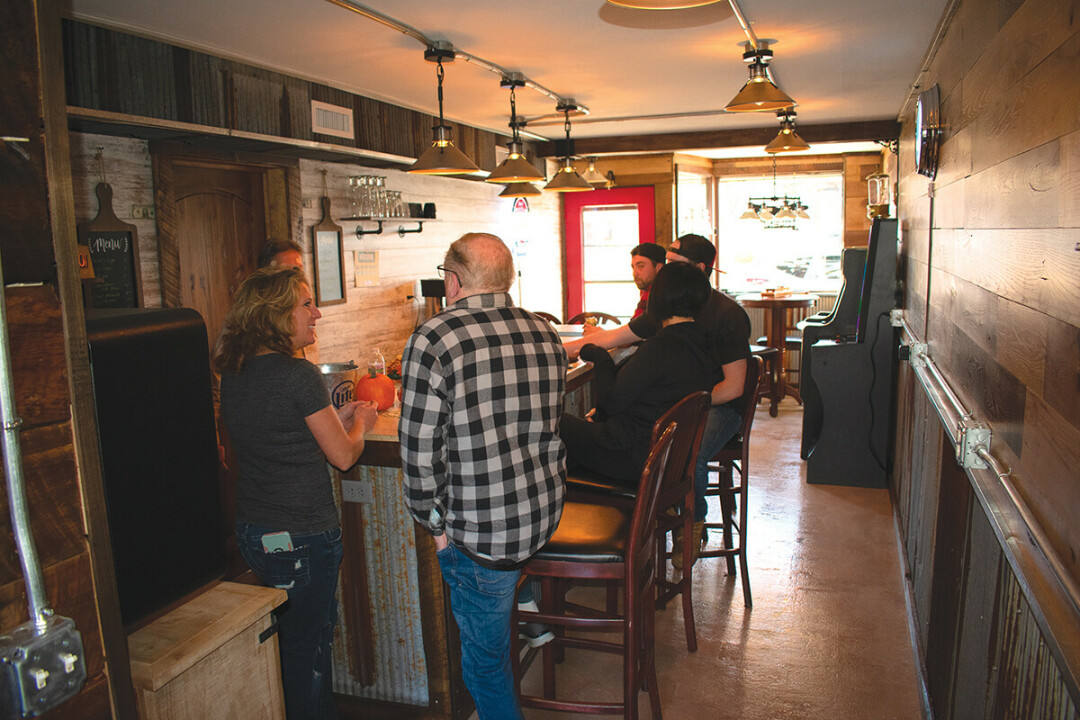 WHERE EVERYBODY KNOWS YOUR NAME. Jessica Bertoni, far left, with patrons at her new bar, The Waiting Room, on Bellinger Street. The tavern is just 300 square feet -- including the restroom.

After Jessica Bertoni opened Jessie J’s Barbershop in Eau Claire five years ago, she started to wonder what to do with the smaller, unused side of the building on Bellinger Street.

“I had the space and I thought if people were waiting, they could go over here right,” she said. “Have a beer or whatever, you know, hang out and wait for the haircut.”

The idea for the Waiting Room was born. It took a few years to be realized, however: First, there was a global pandemic, then the necessary remodeling. The Waiting Room officially opened Oct. 3, which makes it Eau Claire’s newest bar, but it likely holds another distinction as well: At just 300 square feet, including the restroom, The Waiting Room is almost certainly Eau Claire’s smallest bar – far smaller than Big T’s, The Joynt, Clancy’s, or any other townie tavern you can think of.

At just 300 square feet, including the restroom, The Waiting Room is almost certainly Eau Claire’s smallest bar – far smaller than Big T’s, The Joynt, Clancy’s, or any other townie tavern you can think of.

It’s certainly small, but the vibe is more cozy than cramped. Housed in a century-old concrete block building with an exposed-wood facade that makes it look like it belongs in a German village, The Waiting Room doesn’t yet have its name out front (although there is a Budweiser sign in the window). The room is dominated by a long bar that seats about eight patrons, who can choose from among a dozen beer options, all in cans. Don’t ask for a cocktail: The bar is licensed only for beer. 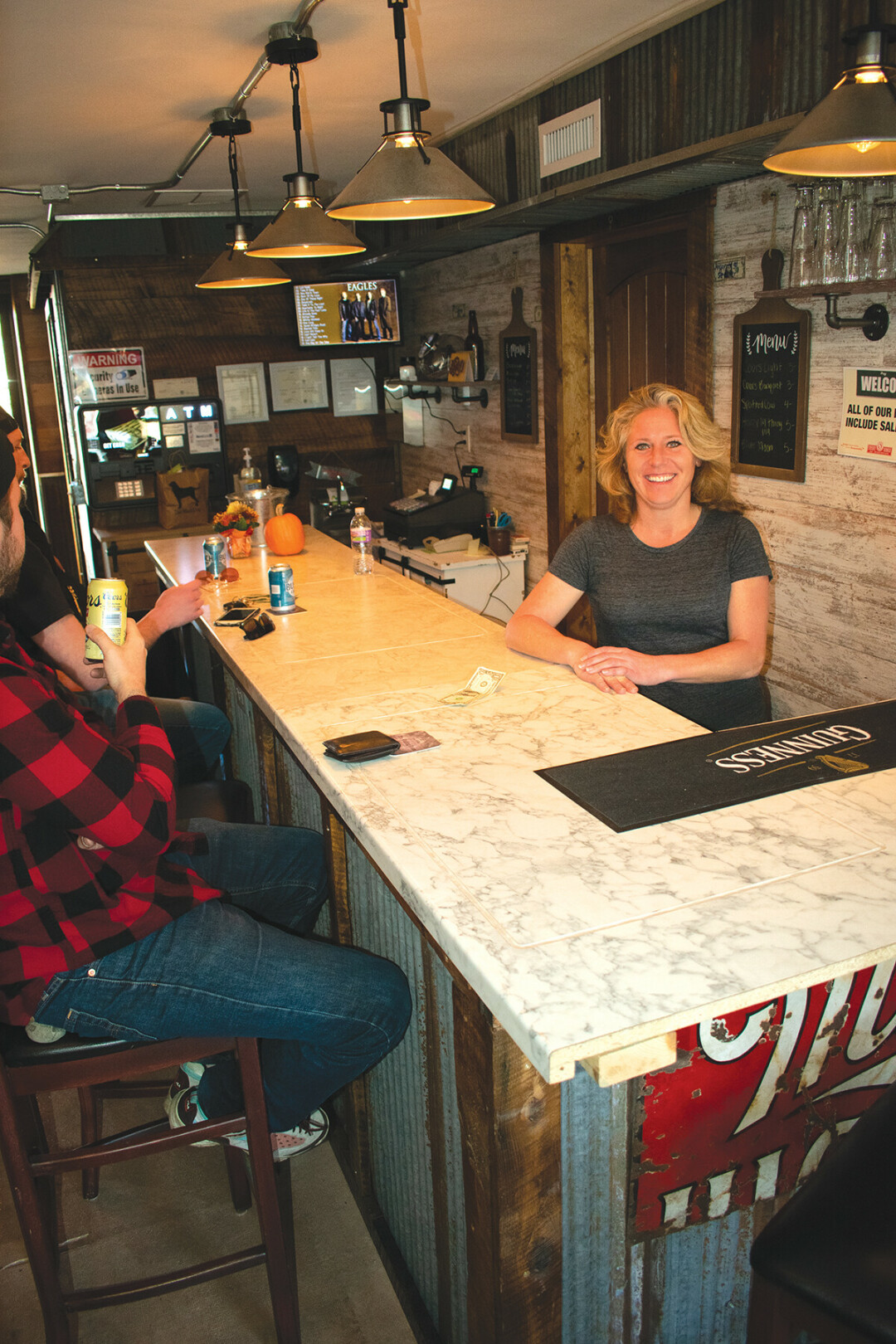 ... AND THEY'RE ALWAYS GLAD YOU CAME. Owner Jessica Bertoni, behind the bar, is aiming for a “Cheers”-like atmosphere.

“I have to be very choosy because I don’t have a lot of space,” Bertoni says of her beverage selection, which includes Spotted Cow, Blue Moon, Coors Light, Busch Light, Sam Adams Oktoberfest, and more. “We’re just figuring out what sells right now.”

A single table sits in the front window, topped with a cribbage board and a deck of cards. Bertoni is hoping she can attract a morning coffee-and-cribbage following, and has plans for a pool table (the miniature kind; a full-sized one would be about as wide as the room).

So far, the bar has mostly drawn a low-key crowd of friends, neighbors, curious passersby, and – of course – barbershop patrons. Bertoni owns and operates the barbershop, which was previously owned by Henry “Heinie” Stapelmann from 1960 to 2017.

Don’t expect The Waiting Room to be a wild party joint: The hours are 8am to 8pm Monday to Friday.

Ask Bertoni what she hopes from The Waiting Room, and she mentions a famous fictional pub: “Almost like a Cheers where it’s cozy and laid back and not crazy.”

It’s not a far-fetched idea: The Waiting Room is small enough that it’s possible everyone could know your name. 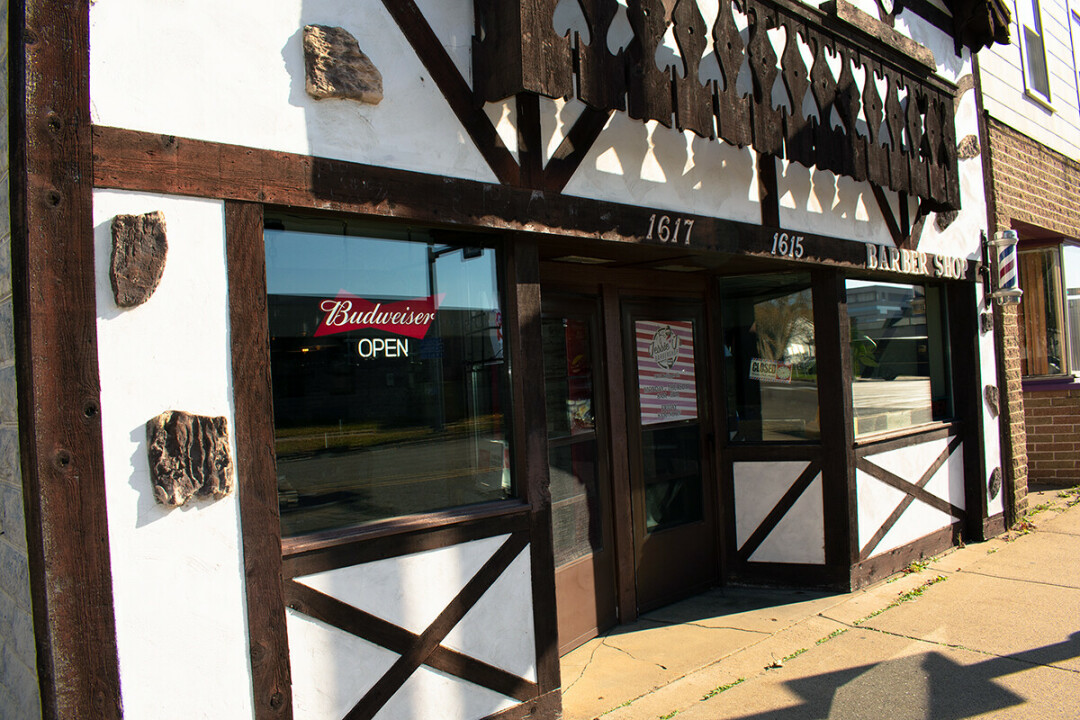 WOULDN'T YOU LIKE TO GET AWAY? The Waiting Room, which is so new it doesn't yet have a sign, is tucked into a small building next to Jessie J's Barbershop.
share
comments 0