If you pay a visit to Boyd Park in Eau Claire to check on the progress of the transformation of that public space on Main Street, you may have noticed a strange-looking tree between the new playground equipment and the future skate park.

The towering tree resembles the broad-canopied acacia of the African savannah — except this tree is optimized not for photosynthesis, but for electricity production. The E-Cacia Solar Tree, created by Eau Claire-based Solar Forma Design, is the first of its kind, and its recent installation was officially celebrated on Thursday, Oct. 20, in a ceremony featuring community members, elected officials, and business leaders.

The 17-foot “tree” is topped with 420 square feet of solar panels, which will generate as much as 20 kilowatt hours a day, or roughly the same as photovoltaic panels atop a 2,500-square-foot home, said Brian Graff, co-founder of Solar Forma. That power will be fed back into the electric grid.

The signals we’re getting from the marketplace is that maybe we’re on top of something, and this can be a new and growing industry here in the Chippewa Valley.

“We're honored that we can place the very first one of these innovative products in Boyd Park in our hometown of Eau Claire, Wisconsin,” Graff told the gathering, which included U.S. Sen. Tammy Baldwin, D-Wis. “But these things are going to be all over the world. … The signals we’re getting from the marketplace is that maybe we’re on top of something, and this can be a new and growing industry here in the Chippewa Valley.”

Graff explained that Solar Forma was founded with both art and environmentalism in mind. “We started the company in 2019 with the idea of trying to figure out how to make solar arrays more aesthetically pleasing and complementary to human spaces,” he said. Unlike traditional solar panels, he said, Solar Forma installations not only provide electricity but also shade while adding an attractive feature to public spaces. “We can increase the adoption and the uptake of solar energy and we can make a contribution to reducing greenhouse gas emissions,” Graff said. “And at the same time we can increase the usability of public spaces by creating an element of interest, satisfying people’s functional needs and fostering the sense of community by creating a place to rest relax and recharge.”

Graff said the renewable energy provisions in the Inflation Reduction Act, which was signed into law by President Joe Biden in August, will help make the company’s products more attractive in the marketplace.

Baldwin called the legislation the “biggest investment in combating the climate crisis in our nation’s history.” Among other things, the law created a 30% tax credit for the installation of solar panels and battery storage systems. Ultimately, she said, the law will reduce both energy costs and the nation’s carbon emissions.

“By investing in solar we are supporting our ‘Made in Wisconsin’ economy, growing our workforce, cutting our carbon emissions, and achieving energy independence,” Baldwin said. “And with installations like this one the Eau Claire community and Solar Forma Design are sending a clear message that Wisconsin is ready to build a thriving renewable energy economy.”

Deputy City Manager Dave Solberg said that the installation, which was first championed by retired City Manager Dale Peters, will help the city meet its long-term renewable energy goals. Solberg noted that Boyd Park is just across the Eau Claire River from Banbury Place — the former Uniroyal tire factor, which once powered the city’s economy.

“It’s very exciting to look into the future. … We’re likely going to be exporting these throughout the world,” Solberg said. 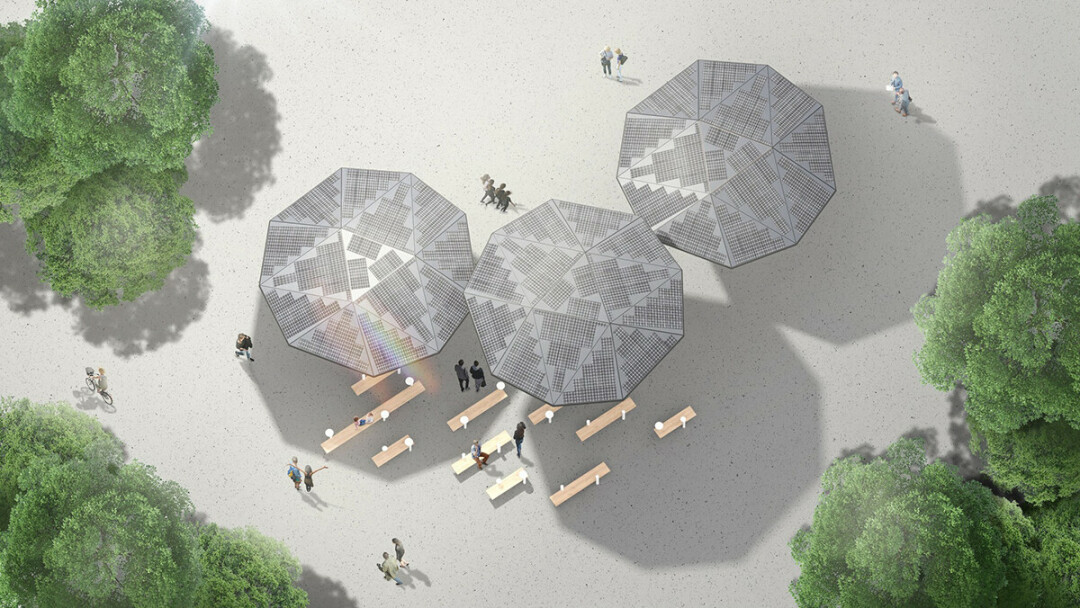 While Solar Forma’s sales so far have been limited to Wisconsin, Graff says the business has fielded inquiries from as far away as Germany and South African. He’s confident that the idea could go global.
“Getting a public install is a proof of concept form a marketability standpoint,” Graff said.

Solar Forma has four target markets: municipalities (who may want to emulate the City of Eau Claire and put solar trees in parks or other public places), corporate campuses, colleges and universities, and health care campuses.

In addition to Boyd Park, Solar Forma’s trees can be seen outside Artisan Forge, 1106 Mondovi Road, where the business is based. Another E-Cacia tree is slated to be installed by the city in the Cannery District redevelopment area next spring, while a Wave Solar Carport will be installed yet this year at the Forest Street parking lot, just north of the farmers market pavilion in Phoenix Park. Like the E-Cacia, the carport exhibits what Graff called “biomimicry” — using shapes found in nature to solve engineering problems. In this case, the carport’s roof is shaped like undulating ocean waves.