Election Day is Coming. Here’s What You Need to Know About Voter ID, Registration, and More 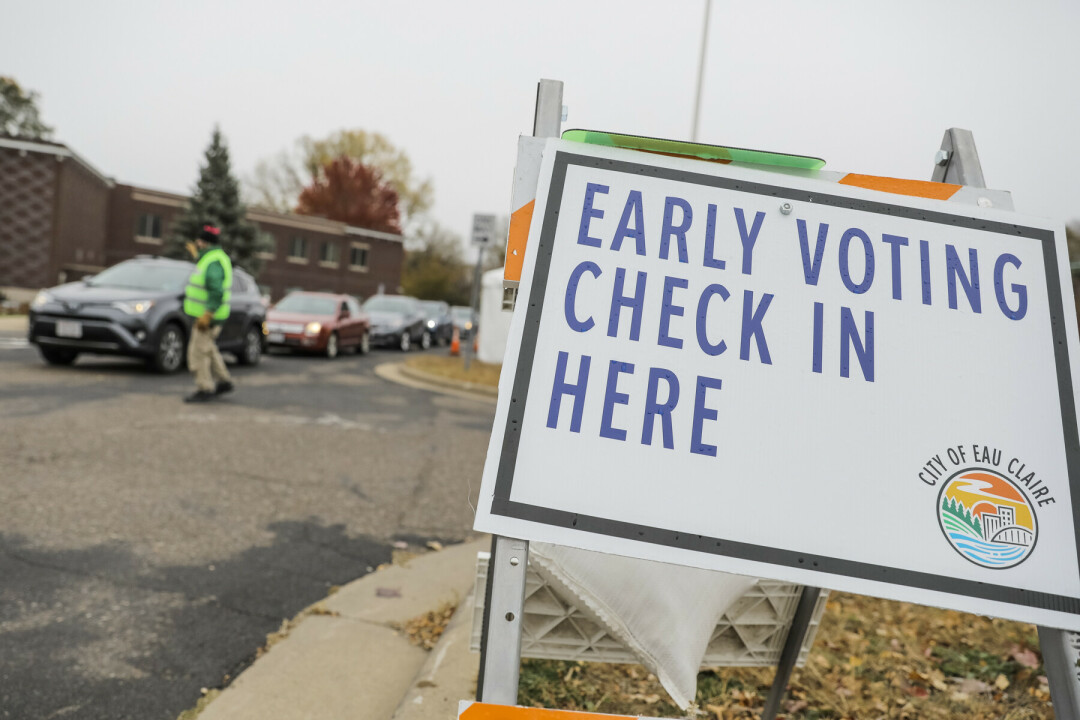 VOTE EARLY BUT NOT OFTEN. The drive-through early voting setup in Eau Claire in 2020.

They call the elections that will happen on Tuesday, Nov. 8, “The Midterms” because they fall in the middle of a presidential term. In addition to serving as a report card on how Joe Biden has been doing as president, they are a quiz for voters, too: How much have they been paying attention? Do they know what’s at stake? In this case, it’s not only the governor’s office and the state Legislature, but also Congress. With the U.S. Senate divided 50-50 between Republicans and Democrats, the race between incumbent Republican Sen. Ron Johnson and his Democratic challenger, current Lt. Gov. Mandela Barnes, will have nationwide consequences. Likewise, Democrats hold a slim majority in the U.S. House, so the contest for the open seat in the 3rd Congressional District – which includes most of the Chippewa Valley – between Democrat Brad Pfaff and Republican Derrick Van Orden will also have an impact far beyond western Wisconsin. On top of these heavy political decisions, Election Day is also a test in another way, namely trying to vote successfully amid the sometimes confusing rules that govern the process. Here are a few things to know that will help you make your vote count.

NEED TO REGISTER OR FIND WHERE TO VOTE?

If you’re a first-time voter, if you’ve moved, or if you just want to double-check that you are actually registered to vote, visit myvote.wi.gov. There you can confirm your registration, request an absentee ballot, learn what kind of photo ID you’ll need, locate your polling place, and see what will be your your ballot. If you aren’t registered to vote already, it’s too late to do so by mail or online (the deadline was Oct. 19). However, you can still register in person by 5pm Friday, Nov. 4, at your municipal clerk’s office. Find out where that is by putting in your address at myvote.wi.gov.

WHAT’S THE DEAL WITH VOTER ID?

According to the Wisconsin Elections Commission, “You must show an acceptable photo ID to receive a ballot for all elections.” So what counts as “acceptable”? If you’ve got a regular Wisconsin driver’s license, you’re in the clear (as long as it’s either unexpired or expired after that last general election, which was Nov. 3, 2020). You can also use a state ID card (which you can get free from the DMV), a U.S. Military-issued ID card, a U.S. passport, a university-issued ID card, and several other options. You can find all the details at bringit.wi.gov.

Anybody in Wisconsin can get an absentee ballot by mail for any reason. However, you need to request one by 5pm on Thursday, Nov. 3, and it has to be returned by 8pm on Tuesday, Nov. 8 – when the regular polls close – or else it won’t be counted. If you haven’t requested an absentee ballot already, do it pronto at myvote.wi.gov. Once you’ve filled the ballot out, you can return it by mail – but keep in mind that it has to get back to local election officials by Election Day!

If you’d rather hand-deliver it, you can do that, too: If you live in the City of Eau Claire, you can drop your ballot off at the elections office at City Hall (203 S. Farwell St.) between 8am and 5pm Monday-Friday; you can drop it off at the in-person absentee voting site (see more on that below); or you can bring it to your polling site on Election Day between 7am and 8pm. Remember: These are all rules for folks in the City of Eau Claire. If you live in another community, contact your municipal clerk’s office for details about absentee options.

WANT TO VOTE EARLY IN PERSON?

The City of Eau Claire (and many other municipalities in Wisconsin) offer in-person absentee voting – essentially allowing you to vote early so you don’t have to worry about getting to the polls on Election Day. You’ll even be able to register to vote on site if you’re not registered already. In Eau Claire, in-person absentee voting starts on Tuesday, Oct. 25, and ends on Friday, Nov. 4, at City Hall. As in other recent elections, the voting will be done via a drive-through. The hours will be 9am-6pm on Monday-Thursday and 9am-4pm Fridays. (And again, if you live in another community, contact your municipal clerk’s office for details about early voting options.)