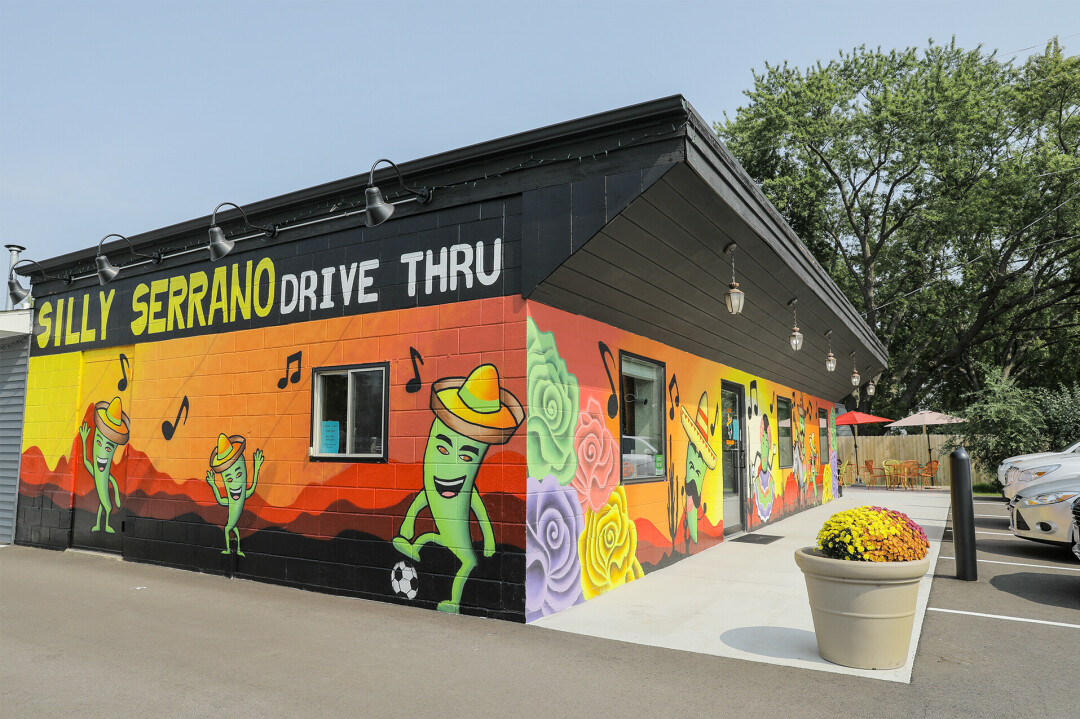 GET SILLY WITH IT. Silly Serrano Mexican Restaurant just reopened at its new home on Cameron Street in Eau Claire. The place is hard to miss.

A former downtown Eau Claire eatery has moved just a hop and a skip away over to Cameron Street, and officially opened its doors at the new location on Tuesday, Sept. 13, after a brief closure while wrapping up its move.

For about three-and-a-half years, Silly Serrano Mexican Restaurant has called the corner of Riverfront Terrace across from Phoenix Park home, its whimsical signature dancin’ chili pepper logo marking the spot. Now, anyone driving down Clairemont will be hard pressed not to notice the growing group of dancin’ peppers that wrap around the entirety of the new location at 2006 Cameron St.

After acquiring the building from the previous owners of The Living Room Coffee House and Roastery, the Serrano owners have spent the past six months remodeling in anticipation of the move. Juan and Sheila Arredondo, owners of the Mexican restaurant, knew their time at the Riverfront Terrace location would eventually end, but thanks to a natural connection with The Living Room’s owners, that time came quickly.

Sheila explained how great their original spot was for business and visibility during the summertime months, but that during the winter the lack of foot traffic made their time pushing through the staffing shortage that much more difficult. Plus, as renters of the Riverfront Terrace location, the owners couldn’t do all they would have liked to the space.

Driving past The Living Room every day on her way to Serrano for work, Sheila said she had taken notice of their great location, and stopped in around last year’s holiday season for a small business gift card exchange when the conversation about the building’s sale came up.

“I stopped in to do a gift card exchange around Christmastime and I messaged the owners later, like ‘Hey, if you’re ever thinking of selling …” and (then Living Room owner Ron Lovelien) said, ‘Call me!’ ” Sheila recalled. “So, it was really a beautiful, synchronistic decision.”

After acquiring the previous coffee shop space, the Arredondos began moving into the building last March. Since then, they have added on an entire commercial kitchen and all the accompanying bells and whistles, plus a can’t-miss makeover to the entire exterior. While a bit smaller than their original location, the new spot still has great outdoor seating and a snazzy paint job. 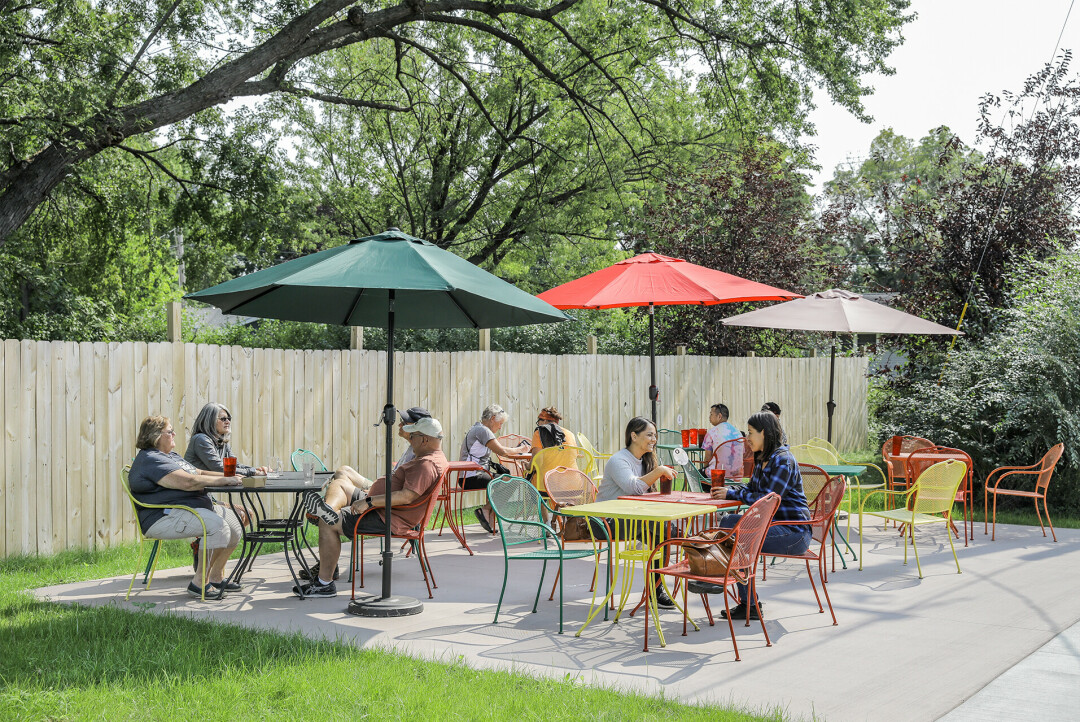 Looking to add some oomph and Serrano flair to the building, Sheila said she was scrolling through Instagram when she came across ColorBlock, a popular program in Eau Claire that has splashed local artists’ work – specifically, murals – throughout downtown E.C. and the surrounding area. There, she found local artist Jaden Flores’ work.

Works by Flores – a self-described street artist – can already be found around the region, including a 50-foot mural on one wall of Banbury Place and work at Artisan Forge. Considering Flores’ own Latin American heritage, Sheila said the collaboration just clicked.

“I just told him ‘bright, fun, colorful, Mexican-feel’ – and he nailed it. I hope everybody notices it, and we’re kind of hoping it’s sort of like a landmark,” she laughed.

What began as a commissioned project for the front of the building ended up being a full wrap-around mural on either side, too, with some of the chili peppers dancing across the walls representing the Arredondos three kids.

With the new building also comes a new twist on their menu, which now includes coffee beverages, and a new set of hours. Taking over The Living Room also led to the Arredondos acquisition of its espresso machine and drive-through window, and after planning to adjust Serrano’s hours to become a breakfast and lunch spot, they decided to keep the coffee.

Sheila shared that beginning at 7am, they will offer traditional coffee drinks reminiscent of The Living Room (lattes, blended drinks, etc.) and “quick bites” such as muffins and cinnamon rolls. At 8am, they will roll our their breakfast menu which will feature Mexican-style breakfast burritos, bowls, and plates, and then move into familiar favorites with their lunch menu. 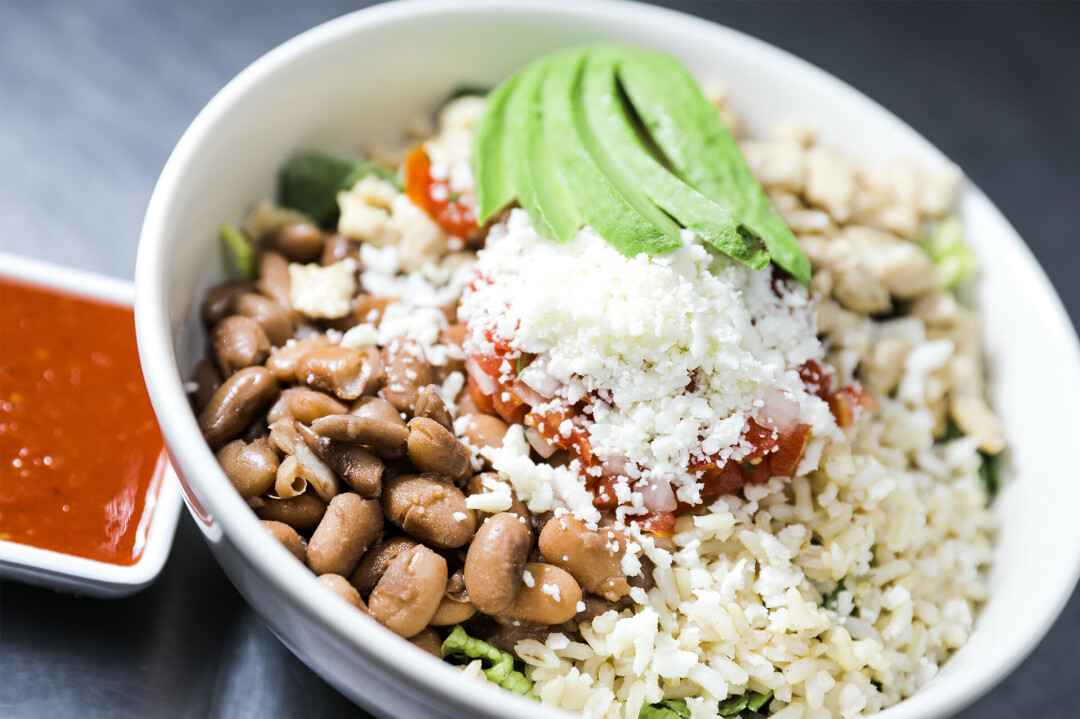 Once the hectic moving process has fully settled down and the final touches are completed, Sheila said they plan on expanding the coffee menu to feature more Mexican-style drinks like horchata and spiced coffee. For now, they have begun working with a local roaster and will serve Mexican bean coffee. Plus, the menu will also gain some additions if all goes to plan, with the idea of adding regular tamales and even a sweet breakfast tamale option.

To some customers’ dismay, Silly Serrano will move forward operating from 7am-2pm Tuesday-Friday and 8am-2pm on Saturdays, cutting out their late-afternoon and evening hours. However, it’s a choice that the Arredondos made to finally try to strike a healthy family and work-life balance, Sheila said.

“I feel like the hardest thing for me is kind of letting people down,” Sheila said. “I know there’s a lot of people like, ‘You won’t be open for dinner?!’ And, it hurts my heart, too. For me, I need to take these years for my kids. I’ve dedicated the last three-and-a-half years of my life to this restaurant, and we have to take at least this next year and dedicate it to my kids.”

Sheila said the simple things like cooking dinner regularly for her family, supporting her kids at after-school activities, and more were reason enough for the decision to change Serrano’s operating hours.

While the restaurant’s hours could change with more staff members, the family is not waiting for that what-if. “If we get really awesome staff that walk in the door and want to help run it and we feel like, ‘OK, these people completely got it, and they will produce the product that we put our names behind,’ then we’ll expand the hours. We haven’t seen it yet.” 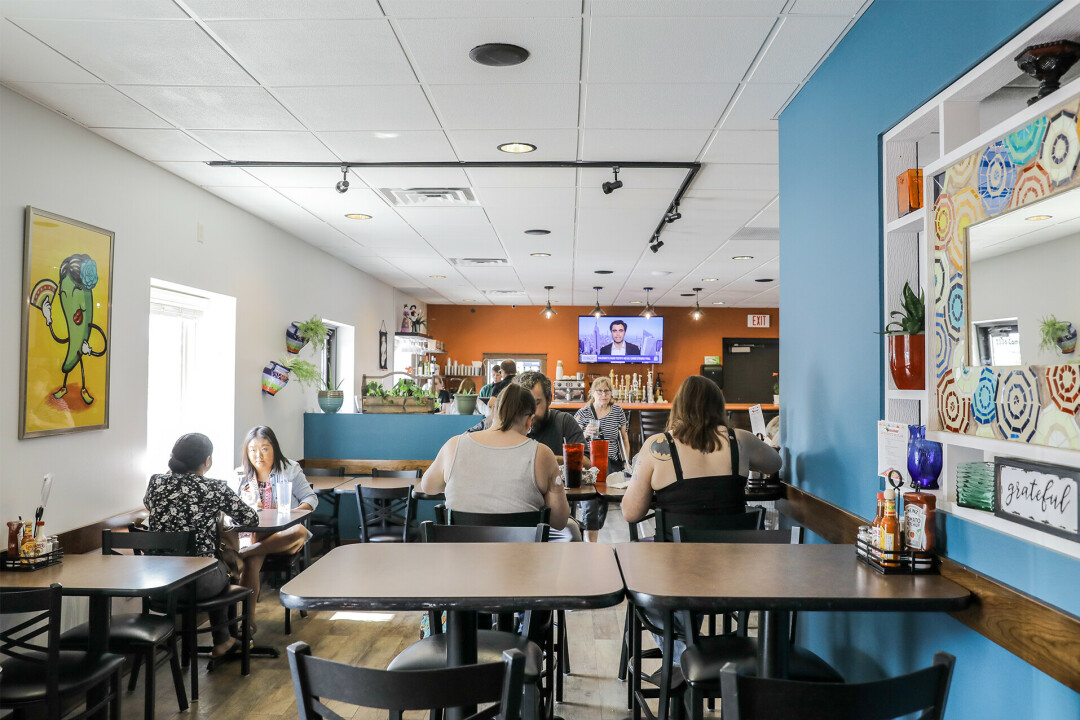 Reopening at a spiffy new building with a great location for visibility, an expanded menu to accompany its new hours, and a revitalized owning family, Silly Serrano Mexican Restaurant is most certainly back in action.

Visit Silly Serrano’s Facebook page to keep up with the restaurant and its owners.