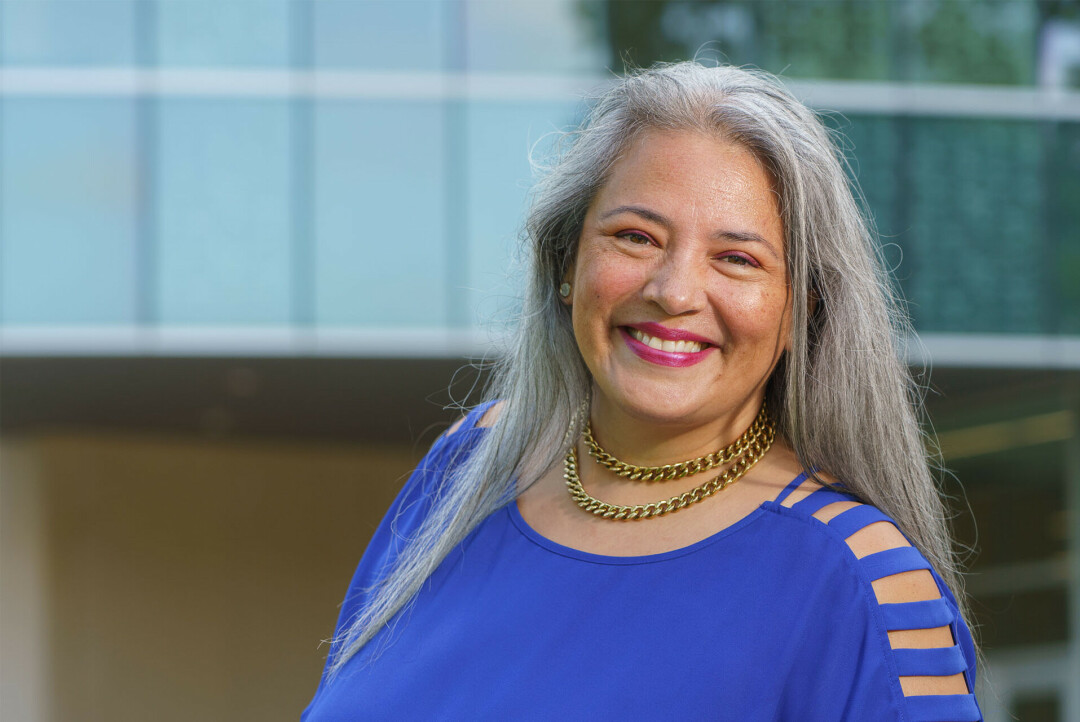 CONNECTING COMMUNITIES. Catherine Emmanuelle has been instrumental in great positive change in the Valley community and has now taken her expertise to UW-Eau Claire as the new director of its Center for Racial and Restorative Justice. (Submitted photo)

Longtime Eau Clairian Catherine Emmanuelle has moved on to her latest chapter by heading back to old stomping grounds. A 2011 graduate of UW-Eau Claire, Emmanuelle has returned as the inaugural director of the university’s Center for Racial and Restorative Justice.

Emmanuelle has a wealth of professional experience alongside longtime roots in the Chippewa Valley community. While locals may recognize her as a former at-large member of the Eau Claire City Council (her role for nearly a decade), for the past five years she worked as Area Extension Director for the UW-Madison Division of Extension, with the Extension in Chippewa, Dunn, and Eau Claire counties. She collaborated with a 19-person staff, including university faculty, focusing on expanding people’s access to university Extension resources, with a focus on serving underserved populations as it pertains to race, ethnicity, and gender.

She completed her bachelor’s degree at UWEC in women’s studies, earning her master’s degree in advocacy and political leadership from the University of Minnesota-Duluth in 2014.

“Having that advocacy and then working with policy within multiple organizations and serving on the City Council for almost 10 years, I just felt called to apply for this position,” Emmanuelle explained. “I feel like our community – and when I say ‘our community,’ I also mean our campus partners in Barron and Marshfield – we’ve got a really special opportunity in some really trying days to make a positive difference.”

Emmanuelle began her own UWEC student career more than a decade ago, and as she looked back on that time period, she credited those she worked with setting her up for where she is now.

I JUST FELT CALLED TO APPLY FOR THIS POSITION. 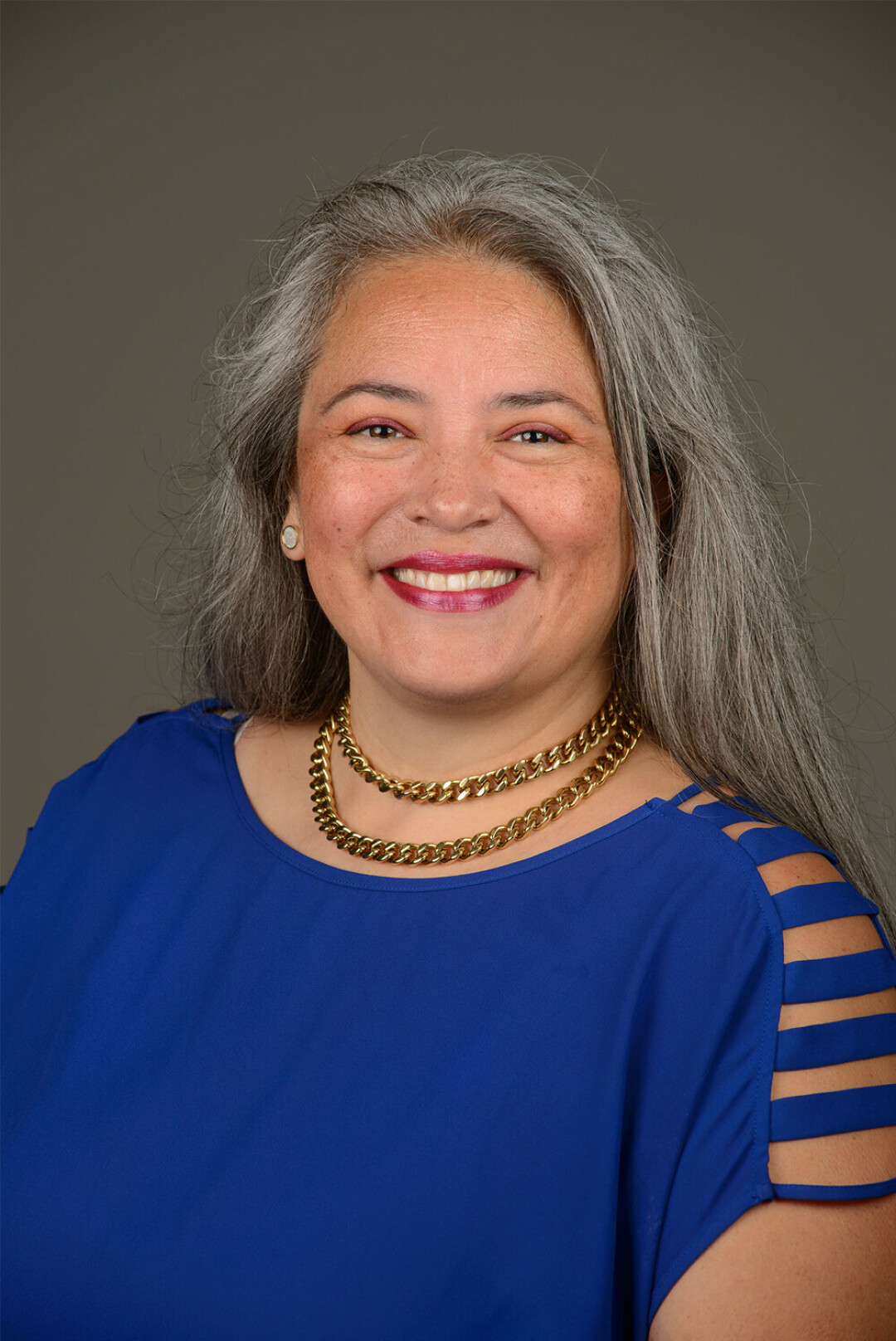 director of uwec's center for racial and restorative justice

She spoke of her longtime mentor, Dr. Katherine Rhoades, who she met and worked with as an undergrad, as well as Chris Jorgensen, who also works in the Equity, Diversity, Inclusion and Student Affairs office at UWEC. Emmanuelle has a group photo up in her office in which Rhoades, Jorgensen, and herself are pictured. “I call this our baby photo,” she laughed.

While working with Rhoades as an undergrad, she first heard of a woman whose story has continued to guide her work, professionally and personally: Mamie Till Mobley. She was the mother of Emmett Till, who was murdered in Mississippi at the age of 14 in August 1955, and her great impact on the Civil Rights movement was a focus of study for Emmanuelle. 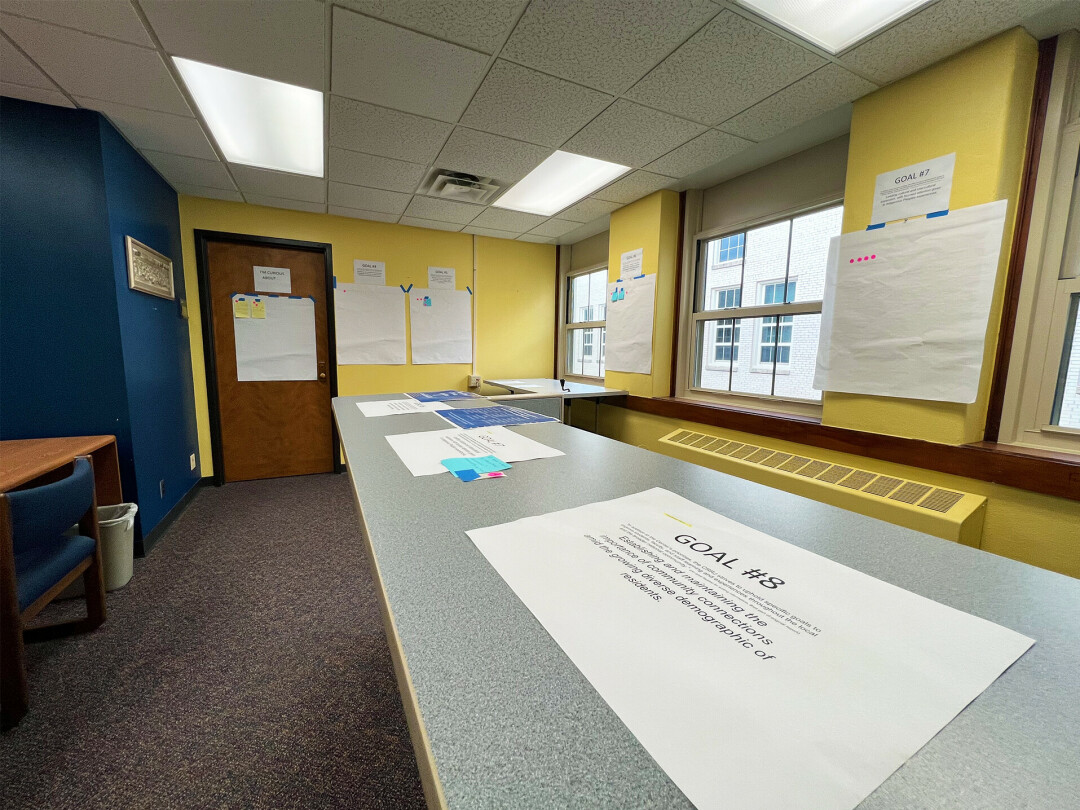 The room in Schofield Hall that Emmanuelle has been using to help visualize the goals and mission of the CRRJ. (Photo by McKenna Scherer)

Having begun the directorial position at the end of June, Emmanuelle has begun building on what was already in motion since the center’s 2020 founding. In fact, she has temporarily taken up a room down the hall from the Equity, Diversity, Inclusion, and Student Affairs (EDISA) offices to visually lay out various goals and missions she will be working on, pulling from a 40-plus-page center report prepared by the previous CRRJ team.

“There has been a robust team of colleagues and some community members who have really breathed vision and life into what their hopes are for the center, and I really take all of their work to heart,” Emmanuelle said. “There are so many dreams in the report.”

At the heart of restorative justice – a system created to facilitate conversation between those who have done harm, and those who have been harmed – is its goal of trying to help people feel whole.

The 2022-23 school year began Sept. 6, and Emmanuelle has been working on building relationships within the university and amping up her own team over the summer, alongside two programs: a restorative justice program – the first at UWEC – and an educational series called Racing Towards Justice.

This fall, the Racing Towards Justice series is partnering with the Pablo Foundation, the Forum, and many campus collaborates to bring Dr. Jelani Cobb to UWEC. Cobb’s talk – “The Half-Life of Freedom, Race and Justice in America Today” – will be free to the public both in-person in the Ojibwe Ballroom and virtually on Nov. 3.

“The center here is really interested in having a restorative justice program not only for our campus community but really with our larger community,” Emmanuelle explained. “Right now, I am not aware of any center in the country that does a campus and community-based (restorative justice) program.”

Emmanuelle will be working with two other centers focused on restorative justice in San Diego, California, and Duluth, which each touch on their respective areas of campus and community programming. She explained she’ll be taking pieces of training with each university’s center, blending them together to begin curating UWEC’s own program that will be co-created with the Baron and Marshfield campus partners as well.

A particularly hot topic that’s been swirling since Emmanuelle’s arrival is where the CRRJ will be housed. Currently, it does not have its own physical space on campus.

“While I do feel this urgency to name a center location, the bigger picture I see is making sure that we set up the center for the most long-term success, where people who have experienced trauma feel safe and supported,” she said.

Ultimately, she is in search of space(s) that prioritize trauma-informed care and CEPTD, or Crime Prevention Through Environmental Design. “If we think about people going to restorative justice, probably at least one person if not more have experienced trauma. So, making sure that I’m finding a space where I can hopefully try to reduce related trauma is important.”

“I’m very passionate about this, and there is nothing in me that wants (the center) to be restricted to a space,” Emmanuelle explained. “I think restorative justice belongs in all spaces, and that’s what I’ll be working towards.”

Folks can look forward to the CRRJ hosting and offering programming that is accessible to the campus and larger community, as Emmanuelle hopes to form a strong bridge of connection.

For further information on UW-Eau Claire's Division of Equity, Diversity, Inclusion, and Student Affairs (EDISA), head over to their website. Get in touch with the EDISA staff, including Catherine Emmanuelle (emmanucn@uwec.edu), by viewing the EDISA staff page.