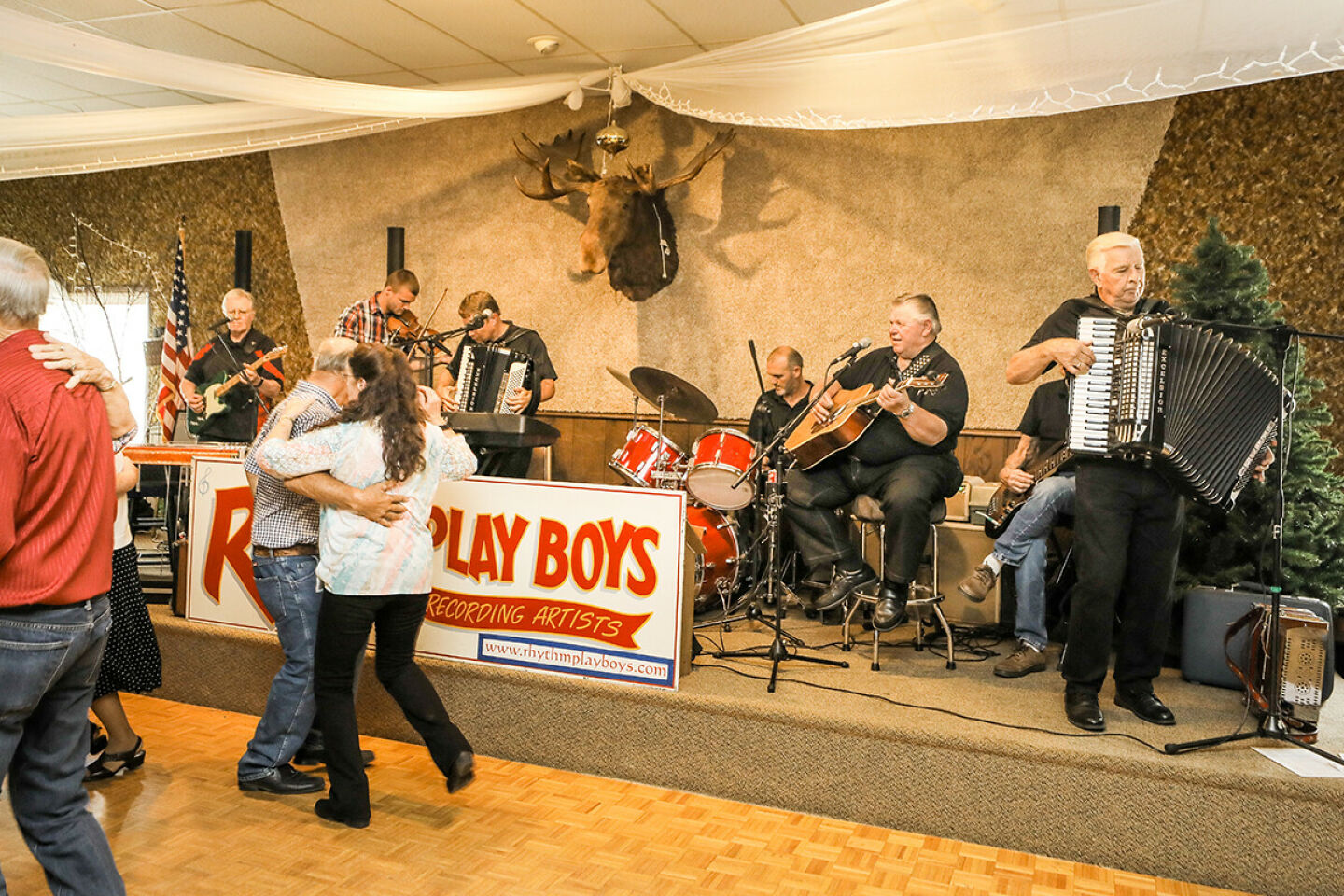 For the Rhythm Playboys, the Dance Never Stops

for 65 years, the Rhythm Playboys have been getting Wisconsinites on the dance floor 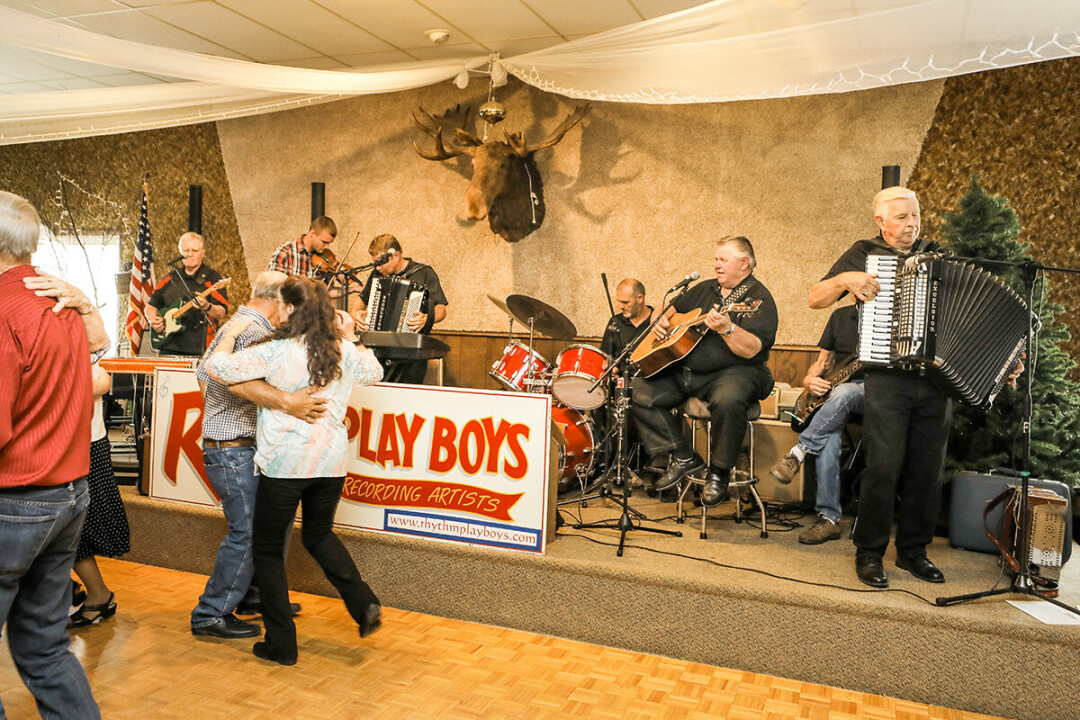 SIXTY-FIVE YEARS YOUNG. The Osseo-based Rhythm Playboys celebrated their longevity at the Moose Lodge in Eau Claire on July 31.

Few bands can honestly say they have the longevity of the Rhythm Playboys.

The Who? Please. They formed in 1964. The Rolling Stones? Closer, but they’ve only been around since 1962. The Beach Boys? Relative youngsters whose first gig was in 1961.

The Osseo-based Rhythm Playboys, by contrast, first performed under that name in 1958, although they trace their roots to an earlier four-piece called the Pleasantville Playboys.

Earlier this summer, the Playboys celebrated their 65th anniversary with a performance at the Moose Lodge in Eau Claire. And it wasn’t just an anniversary party: The show also marked the 100th birthday of the band’s fiddler, Orville Dahl (officially retired, he joined the band on stage for a few tunes); the retirement of the band’s longtime drummer, Al Zastrow; and the 75th birthday of guitarist Jerry Dahl, who has been playing with the band since the 1960s.

It’s not just the band that’s demonstrated longevity: So have their fans, some of whom have been stepping out to the Playboys’ mix of polka, country, big band, and other danceable tunes for 60 year or more.

I think it’s been a key to keeping the fans healthy, because it’s great exercise. I watch them out there dancing – they’re 85, some of them 90 – and I couldn’t keep on like that.

The music may be old-time, but it keeps the performers and their audiences young, says Ryan Herman, the band’s de facto leader and a relative youngster at age 47.

“I think it’s been a key to keeping the fans healthy, because it’s great exercise,” says Herman, son of one of the band’s founders, the late Ralph Herman. “I watch them out there dancing – they’re 85, some of them 90 – and I couldn’t keep on like that.”

He chuckles, then continues: “Not only is it a physical great activity, but it’s a social activity. Everybody goes out and has a good time.” 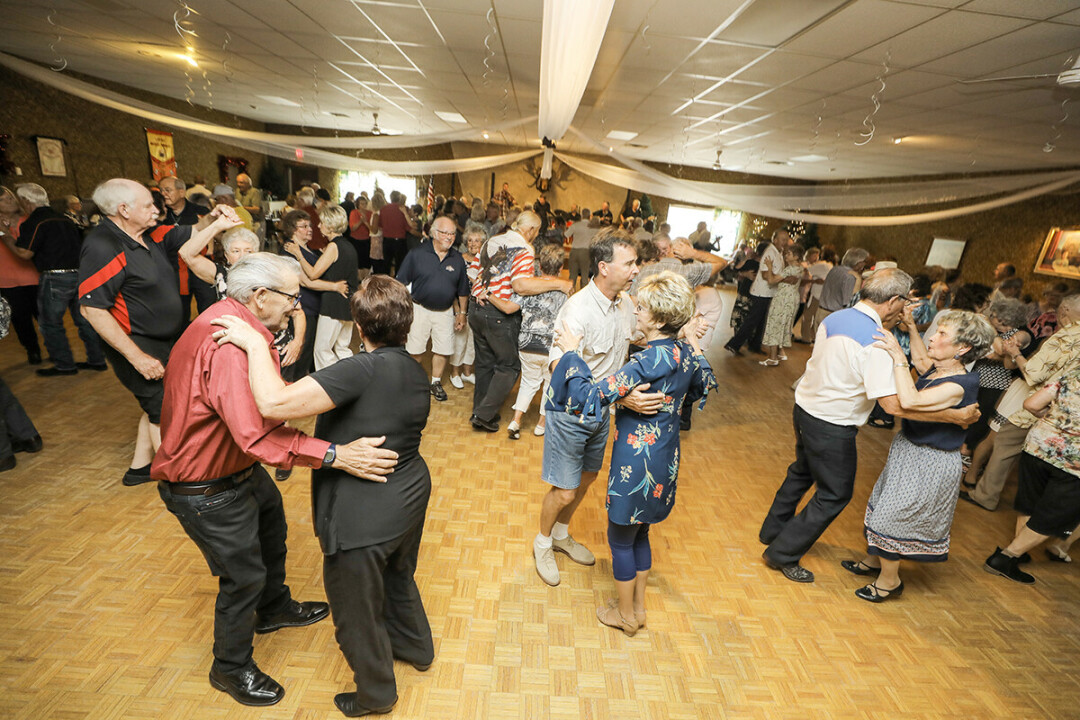 KEEP ON DANCING. The Rhythm Playboys typically attract an older audience, like this one at the Moose Lodge on July 31, but they can get younger people dancing as well during periodic gigs at the Bierhaus in La Crosse and other venues.

And the good times have been rolling since the Eisenhower era. The band got its big break in the early 1960s, when they began appearing daily on Eau Claire’s WEAU-TV on a noontime program called The Farm & Home Show. The band, which then had seven members, recorded a set of songs each Tuesday evening for about five years.

In those days, the band kept busy playing the circuit at ballrooms and dance halls throughout Wisconsin and Minnesota. A few of those are still around, including the landmark Silver Dome in Neillsville. Most others are gone, such as Fournier’s Ballroom in Eau Claire, where the Playboys performed at the last dance in 1971. 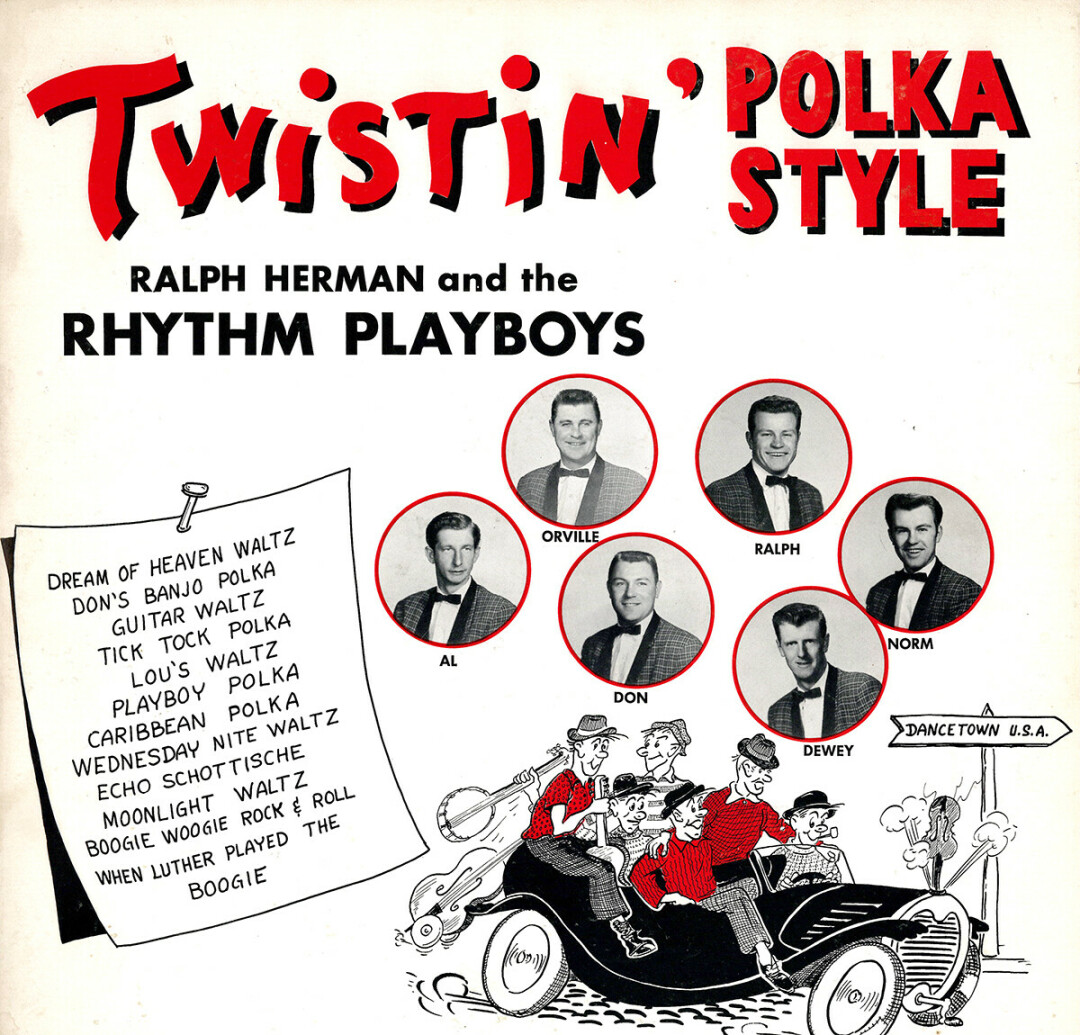 LET'S TWIST AGAIN! The Playboys recorded two vinyl albums in their early years, including this one in 1963.

Nonetheless, the band has kept busy through changing times. The membership has evolved over the years, with many band members performing into their 80s and beyond. Throughout the band’s history, it has played a wide variety of music: While often labeled a polka band, Ryan Herman said, from the beginning they had the instrumentation (including guitar and fiddle) to play a ranging of genres, including classic country (Johnny Cash is a favorite) and early rock ’n’ roll.

In more recent decades, the band has taken to attending the circuit of polka and old-time music festivals around the country, including South Dakota and even Las Vegas. (Orville Dahl made his Vegas debut at age 87. “He’d never flown before, and he flew out to play there, and they loved him,” Ryan recalls.)

Amazingly, other than the COVID lockdown of 2020, there probably hasn’t been a single month in the past 65 years that the Playboys haven’t been luring Midwesterners to the dance floor in some ballroom, Moose Lodge, or senior center.

The band’s current lineup consists of Ryan on keyboard and accordion, Denny Marion (steel guitar and lead guitar), Larry Janke (bass and accordion), Jerry Dahl (rhythm guitar, who has played with the band since he was a teenager in the 60s, turned 75), and Jeff Langen (drums). Ryan’s 20-something nephew, Shandler Herman, sometimes joins on fiddle. He’s the third generation of the family to play in the band.

Ryan acknowledges that most of their fans are senior citizens. However, people of all ages love the music when they hear it, and the band enjoys playing for audiences that skew younger through periodic gigs at the Bierhaus in La Crosse and at events such as Oktoberfest in Chippewa Falls. 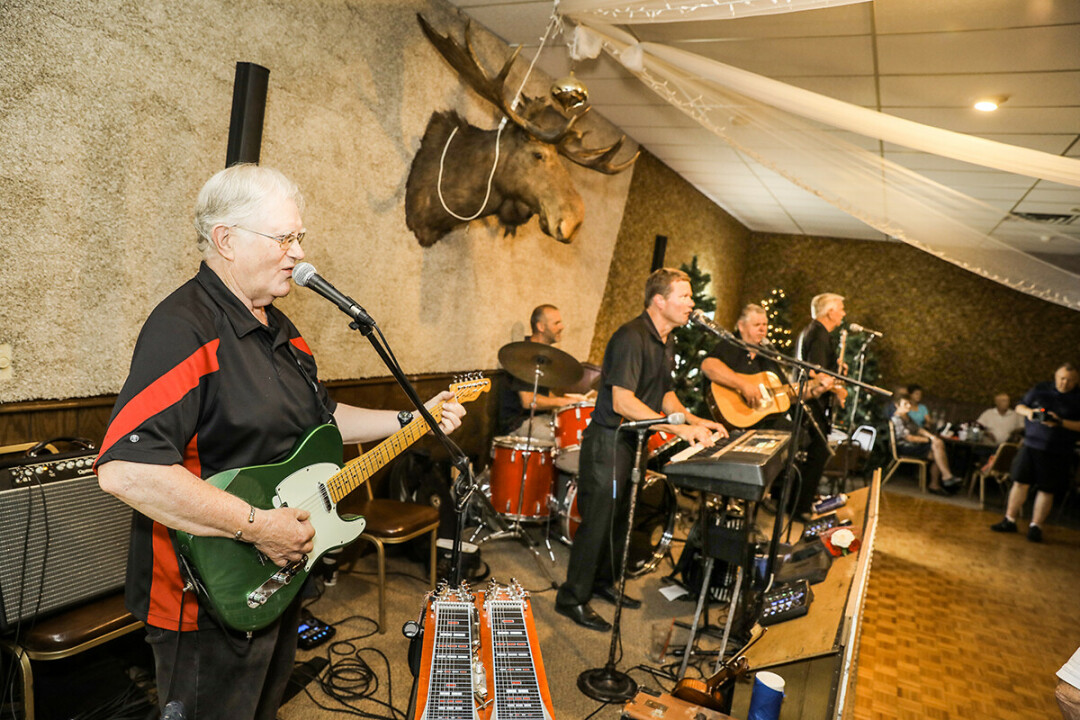 The full band will perform at Oktoberfest in Chippewa Falls on Friday, Sept. 16, from 2-6pm. But that’s just a warm-up for a busy weekend: They’re in Black River Falls on Saturday and in La Crosse on Sunday. Over the course of the fall, two-, three-, and five-piece permutations of the Playboys will perform in Eau Claire, Osseo, La Crosse, New Richmond, Miladore, and at the St. Croix Casino in Turtle Lake (to name just a few).

Ryan says all the performing is a good outlet from his day job teaching second grade in the Eleva-Strum school district. It was the same for his father, who operated a farm while playing 100-plus shows a year with the Playboys.

“You can be having a bad week on the farm, and then it was time to go do music and all of a sudden it was a different story,” Ryan says.

Will Ryan have the musical longevity of some of his bandmates? It’s quite possible. “I love to do it,” he reflects. “As long as there’s a place to play and people that will come, we’ll be there.”

Find out where the Rhythm Playboys are playing next by checking out their schedule at rhythmplayboys.com. While you’re there, check out the video of their 65th anniversary gig. 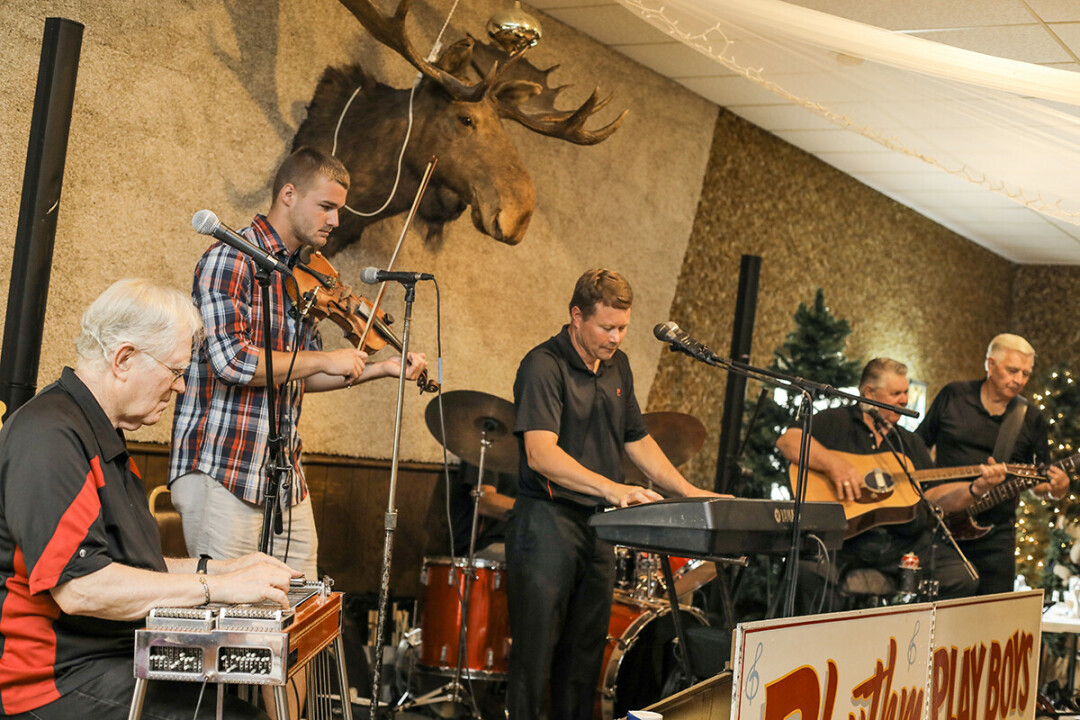