after more than a year of remodeling and addition, the library is almost ready 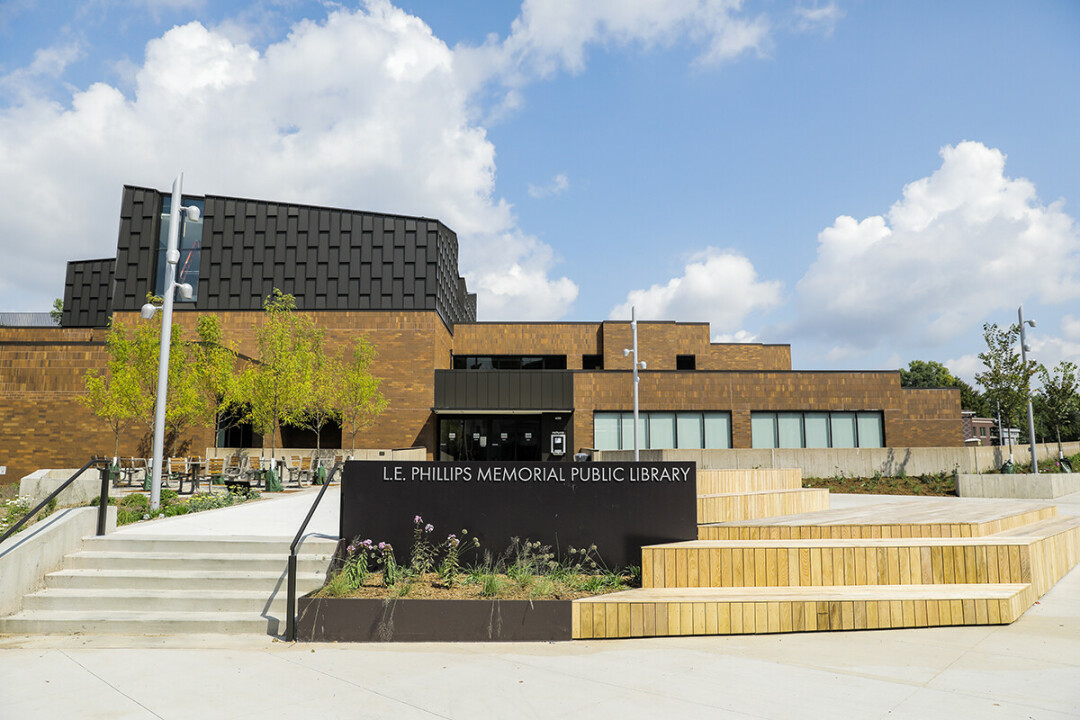 ALMOST READY. The exterior of the newly remodeled L.E. Phillips Memorial Public Library, which is scheduled to reopen in September.

When the L.E. Phillips Memorial Public Library reopens its doors this month after a yearlong $18.5 million renovation, patrons will find plenty that’s familiar: The 46-year-old building occupies the same footprint at the intersection of South Farwell and Eau Claire streets. Most of the books and materials inside are the same, and the “Jack’s Story Time” sculpture still greets you as you enter the children’s area.

But a whole lot has changed – inside, outside, above, below, and behind the scenes.

The library is expected to reopen shortly after Labor Day, and on a recent afternoon it was already a hive of activity, from construction workers toting away equipment to architects checking final details to librarians guiding tours.

Volume One was lucky enough to peek inside, courtesy of staffers Isa Small and Mike Paulus. 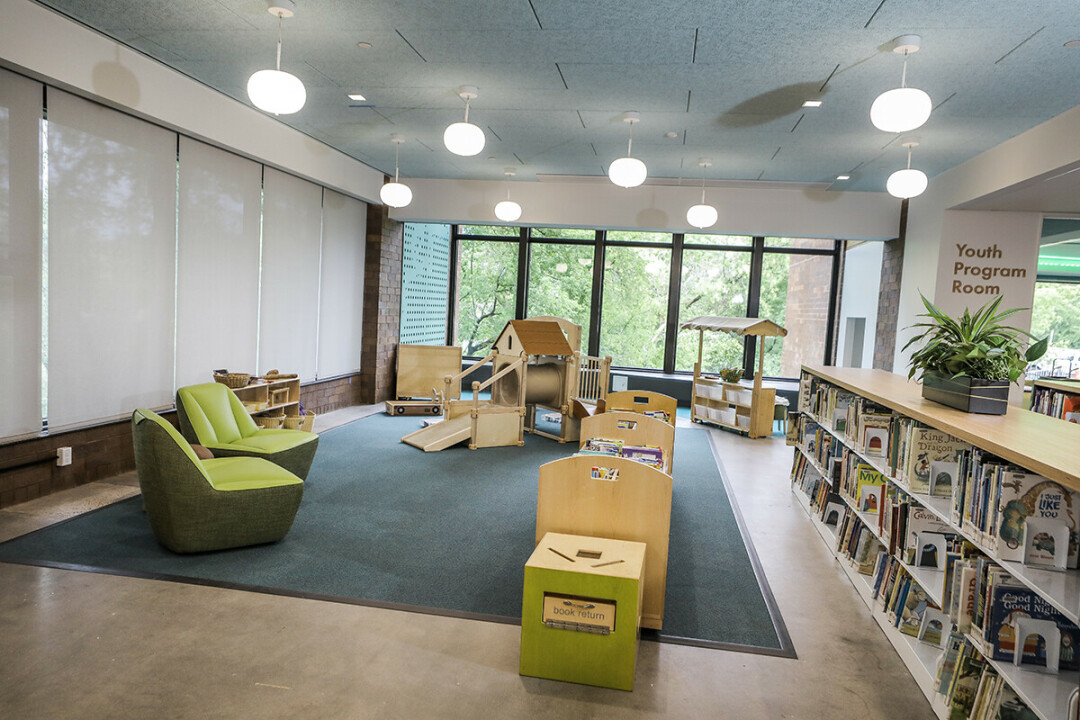 A sign near the library’s front entrance is a reminder that not all changes to the library are visible. In fact, one of the biggest is hidden underground. Beneath the picturesque plaza, which features new signage and seating areas, is a geothermal well field that will help save an enormous amount of energy: The heat-exchange system will help keep the building cool in summer and warm in winter. Energy consumption is expected to be just 35% of what it was previously, even though the remodeled building is larger.

Drivers and pedestrians alike will notice another big change outside: The stretch of Eau Claire Street next to the library is now closed to traffic. (Vehicles will still be able to reach the drive-in bank across the street, as well as the library’s lower level via Dewey Street.)

Next to the front entrance is a new automated return device, which whisks your books to a basement sorting area via a conveyer belt. Theres’s a low-to-the-ground window, allowing patrons to watch the process.

Step inside and you’re greeted by a familiar yet transformed space. The remodeling has created a library that is lighter, airier, and seemingly more spacious. 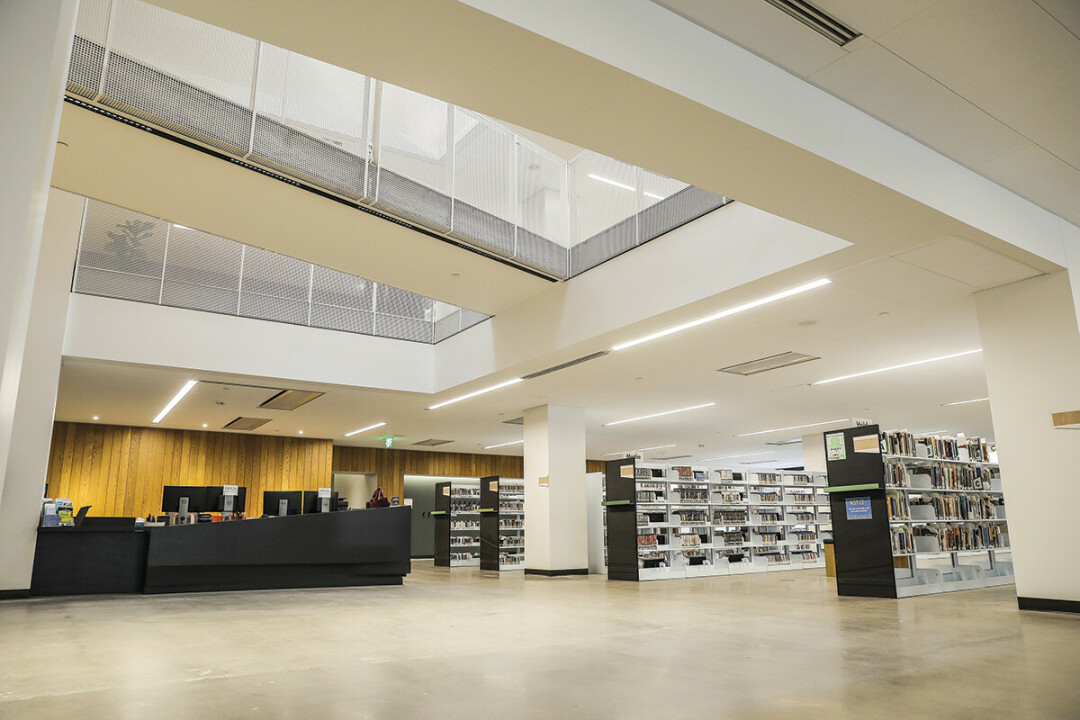 The library's first floor, with the main desk at left.

Paulus notes that sense of openness is due in part to new shelves, which are slightly lower to the ground. Not only does this make them more accessible, but it allows more light to fill the space.

Straight ahead is the main desk, combining youth and adult services. To the right – previously the children’s area – you’ll find the Pablo Foundation Commons. This includes the “Library of Things,” an ever-growing collection of borrowable items ranging from robotic kits to cake pans. Here you’ll also find new seating areas, new windows, and some of the numerous new meeting and study rooms, which can be reserved free of charge. Overall, the library now includes nine study rooms and five public-use meeting rooms. 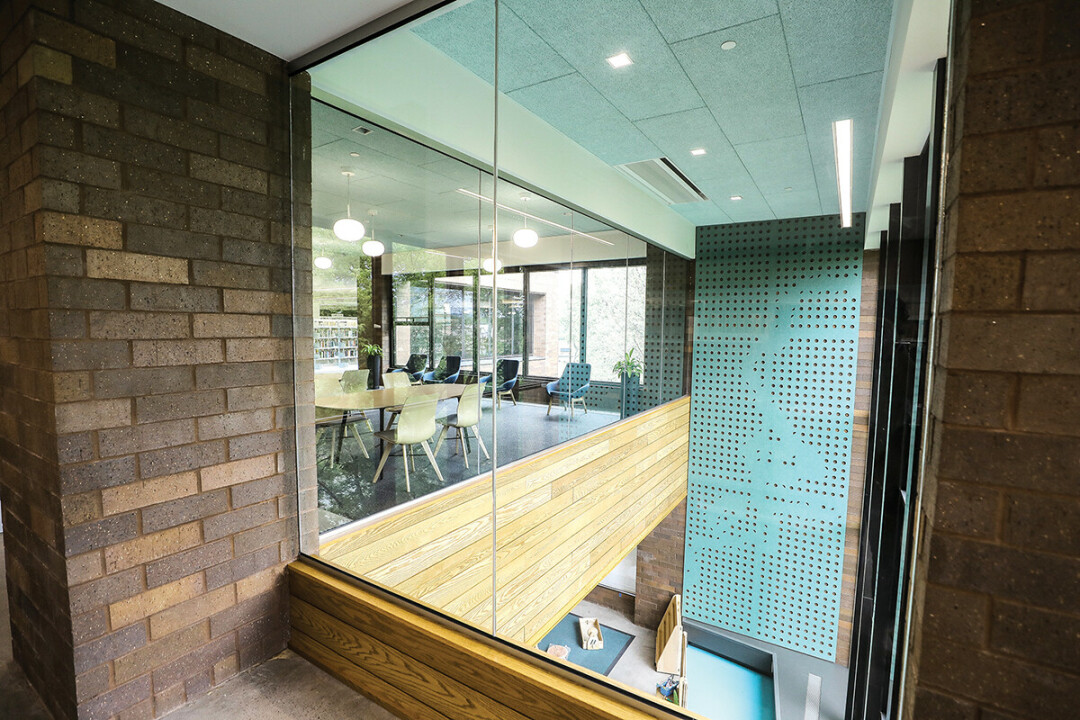 The library has numerous new meeting and study rooms.

“There was a ton of demand,” Small said of the public’s desire for these spaces. “That’s a national trend, especially with so many people working and studying from home.”

To the left on the first floor is a relocated Youth Services area. Now all in one place, youth materials and resources are arranged sequentially from baby books to teen tomes. In the back is a youth program room, which features built-in risers and a screen for multimedia.

Nearby restrooms are single-occupancy, and the first and second floors feature “comfort rooms,” perfect for families seeking privacy to nurse infants or calm overwhelmed toddlers.

The second floor is now home to all of the library’s adult collections, including fiction, nonfiction, reference, special collections, and genealogical materials. Public computer terminals as well as additional meeting and study rooms are also here. And, if you look closely, you’ll see walls of wood reclaimed from the library’s previous design. Sunlight streams down from genuine skylights (previously, what appeared to be skylights provided only artificial light) and patrons can crisscross the level on bridges overlooking the first floor, retaining some of the library’s previous open-concept layout. 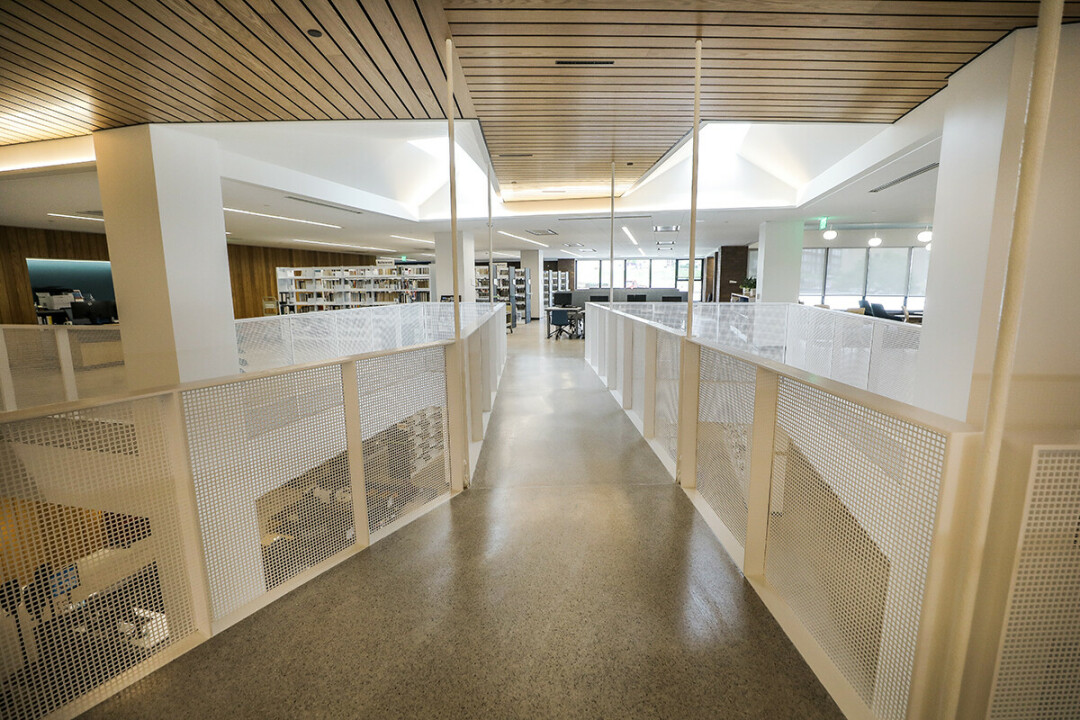 Walkways connect parts of the second floor and offer views to the library's first level.

The literal crowning achievement of the project is the newly added third floor. The floor is filled with the library’s most innovative elements – including the aptly named Innovation Lab, which is designed to host events, workshops, and cooking classes (there’s a full kitchen). There’s also the new, 200-seat Riverview Room, which can host even larger events and boasts a catering kitchen and cutting-edge technology to allow events to have a virtual component. Between the two rooms is a dedicated art gallery which opens out onto a rooftop terrace featuring greenery, relaxed seating, and amazing views of downtown. 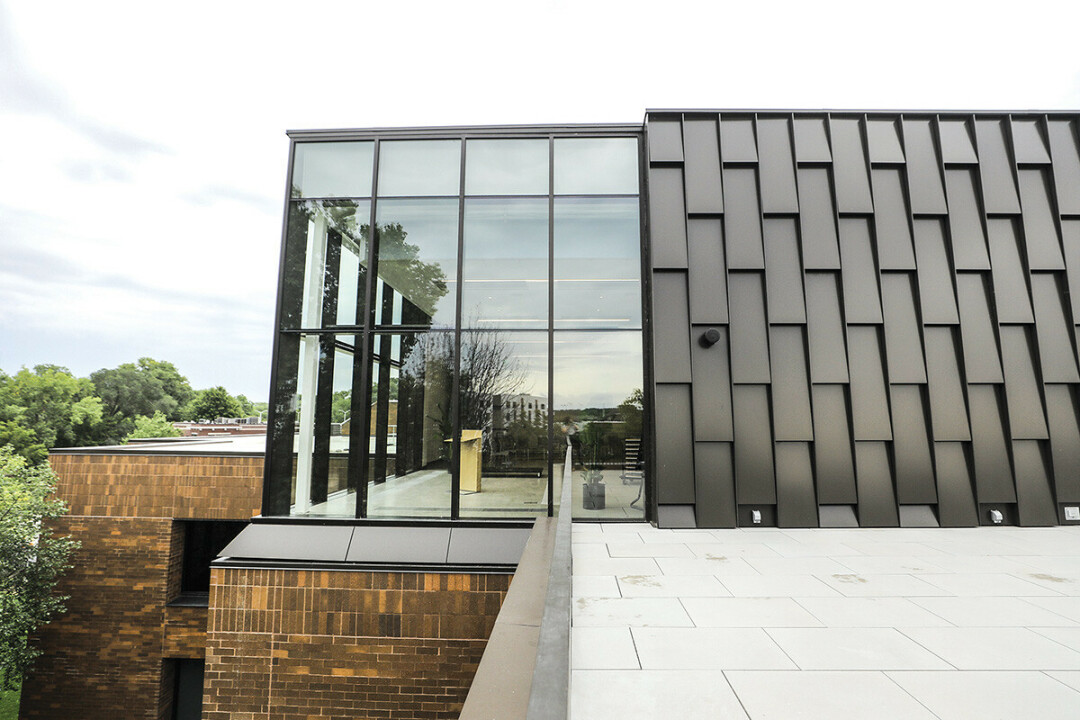 Part of the outdoor terrace atop the library's second floor.

The building’s lower lever has been fully transformed as well. It’s now home to a much-expanded Dabble Box maker space, where patrons of all ages will be able to tinker with technology through library programs and open labs. Weather permitting, the Dabble Box will even extend out into the lower level courtyard, offering outdoor space for messier projects. The lower level also is home to Eau Claire’s newest used bookstore, a one-room space that will be operated by the Friends of the Library. 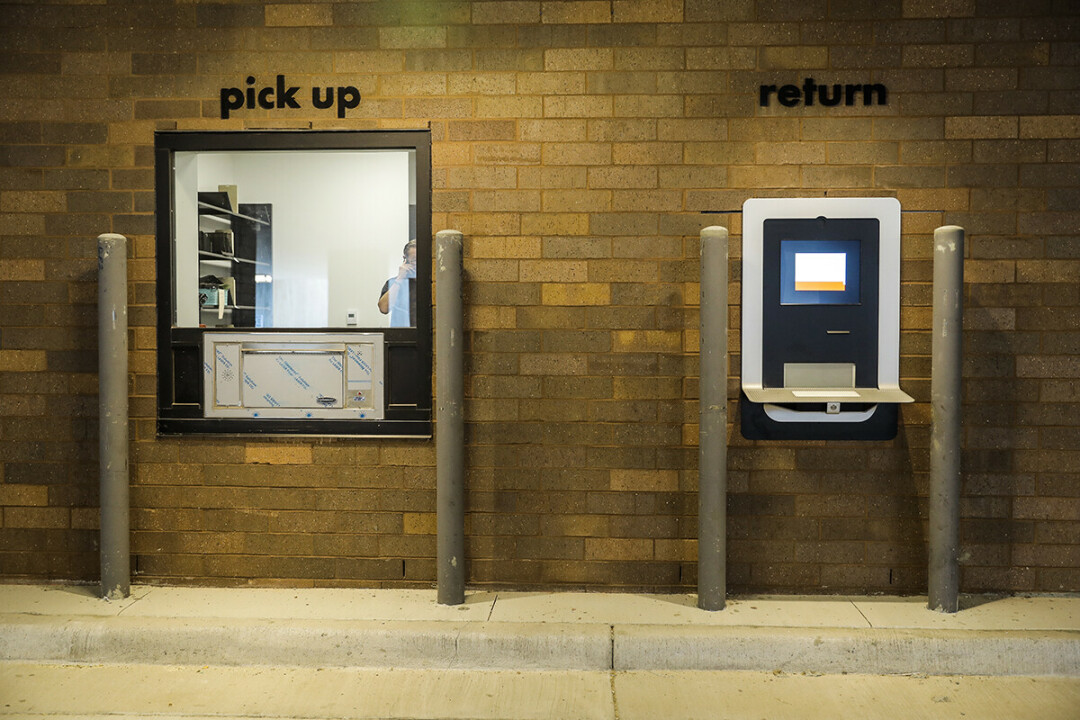 The library now has a lower-level drive-thru with pick up and return windows.

Outside you’ll find one of the library’s most innovative new features: a drive-thru. A few parking spaces have been removed to create a drive-thru where patrons can pick up materials they’ve placed on hold or return items.

You’ll be able to see the upgraded library for yourself soon: While the date of the soft opening is still TBD, a grand opening week is slated to begin Monday, Sept. 26.

Keep an eye on the library project online at ecpubliclibrary.info. The unusual sculpture/seating area is part of what is known as the Headwaters area on the first level.
share
comments 0