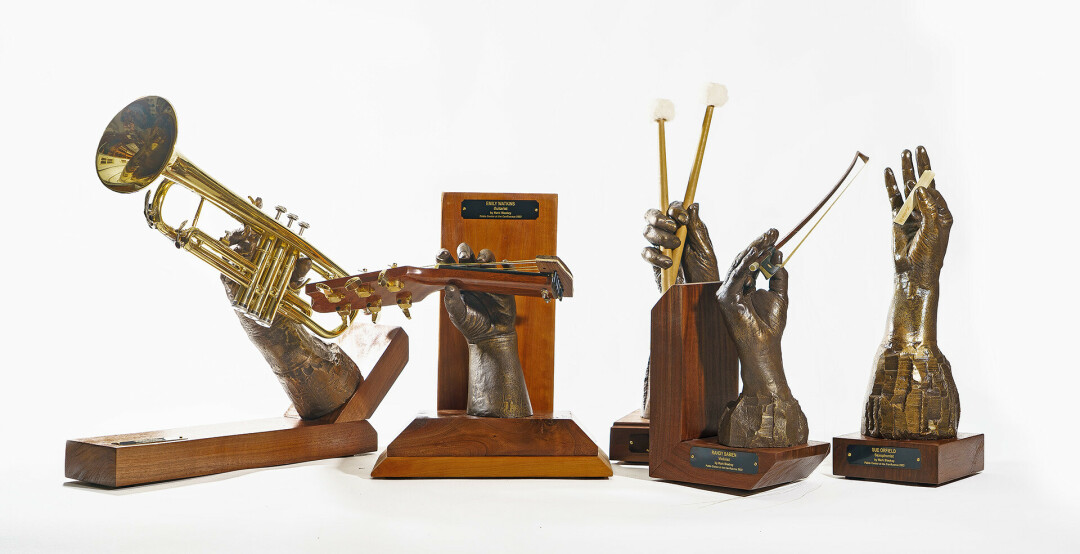 MUSIC TO OUR ... HANDS. Mark Blaskey's exhibit of people's hands will be on display at the Pablo Center from Sept. 16-Nov. 15. (Submitted photos)

After working with cut steel for the last 17 years, Chippewa Valley artist Mark Blaskey tried his hand – literally – at a new style of three-dimensional art: plaster. Blaskey created 28 sculptures and 30 hands of prominent figures in the local arts community, each hand holding their respective tool.

From Sept. 16 to Nov. 15, “A Show of Hands: Notable Masters and Tools of Their Trade” will be on display at the Pablo Center at the Confluence in the Market & Johnson Clearwater Recital Room. Blaskey will be holding an artist’s reception for the show on Friday, Sept. 23, from 5-7pm.

Not only will all the hand sculptures be for sale, but there will also be displays of work by some of the artists whose hands are displayed: These will include surgeon and glass artist Steve Immerman, who will have a fused glass piece for sale; author Cathy Sultan, will have a few of her books available; and artist Terry Meyer, will have his own sculpture available.

The idea to create hand molds came from a commission piece Blaskey was hired to make by Holy Ghost Parish in Chippewa Falls to memorialize the victims of clergy abuse. Blaskey’s design was three hands within a circle: a child’s hand, Jesus’ hand, and a left hand holding a broken crucifix. Blaskey made it in 2D like he normally did, but also made a 3D version because he thought it was missing something.

No one has ever done anything like this before, and it’s a historical snapshot of these people – Holding their tools in their real hands.

SCULPTOR, ON HIS ‘SHOW OF HANDS’ project

After researching different methods for creating three-dimensional hands, Blaskey decided to use his niece, Sarah Blaskey, into his first subject. He created a plaster sculpture of her hand holding a pen – she’s a journalist – because he liked the idea of having people holding tools of their trades. Sarah’s hand will be in the show, as well as the newspaper article that started the series which eventually led to her winning a Pulitzer Prize and Journalist of The Year in Florida for 2021.

Blaskey then went on to ask others to mold their hands, and the project continued to grow as more and more people were recommended as participants. 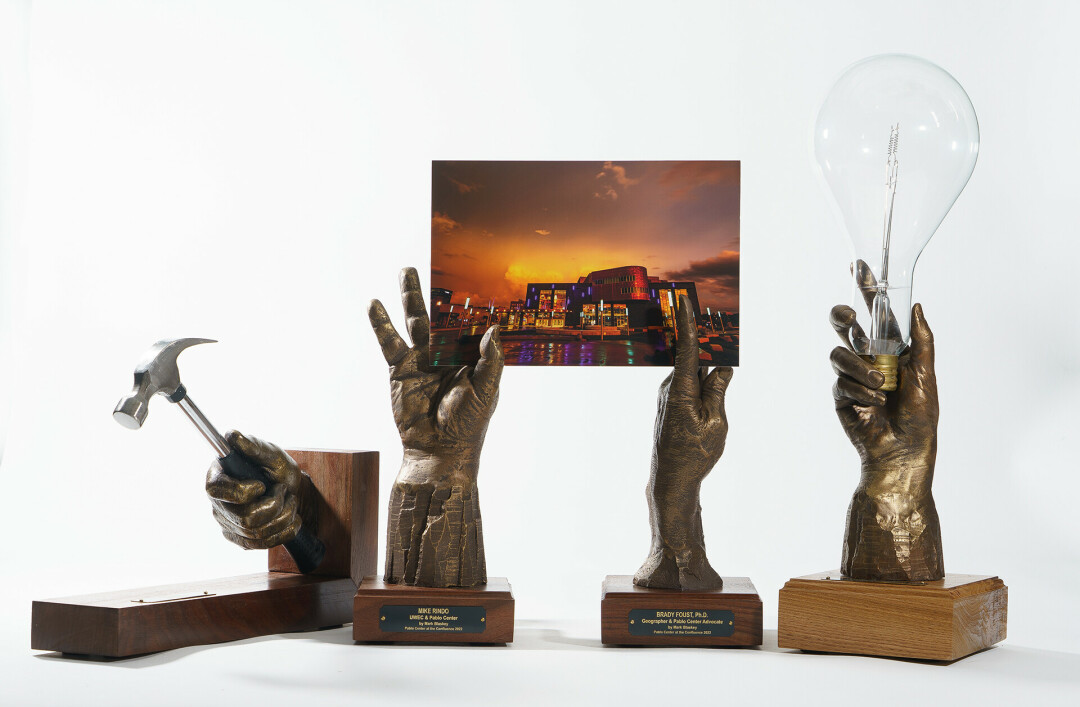 “The most fun part was having people suggest other people be in the show and getting to meet the people,” Blaskey said. “A lot of them we didn’t really know, but now we do.”

The process of completing the sculptures starts with submerging the person’s hand in alginate (a material used to make dental molds) and allowing it to harden. The person then removes their hand and Blaskey pours plaster into the mold, breaking the alginate off when the plaster has hardened. He then used brown, bronze, and gold acrylic paints to give the pieces a metallic look.

“We invented a lot of stuff, technique-wise,” Blaskey said. “It’s plaster, so we’ve broken pieces and we had to learn how to put them back together seamlessly. I had to invent some of those mounts, like for Bob Baca holding the trumpet and William Eisenbarth sculpting the neck of the cello.”

Each tool in the hands was donated to Blaskey, including a never-before-used gavel by retired judge Tom Barland. Blaskey also sculpted the hand of Tiit Raid, a local artist and percussionist whose recent death makes the exhibit feel especially poignant now.

“No one has ever done anything like this before, and it’s a historical snapshot of these people,” Blaskey said. “Holding their tools in their real hands.” 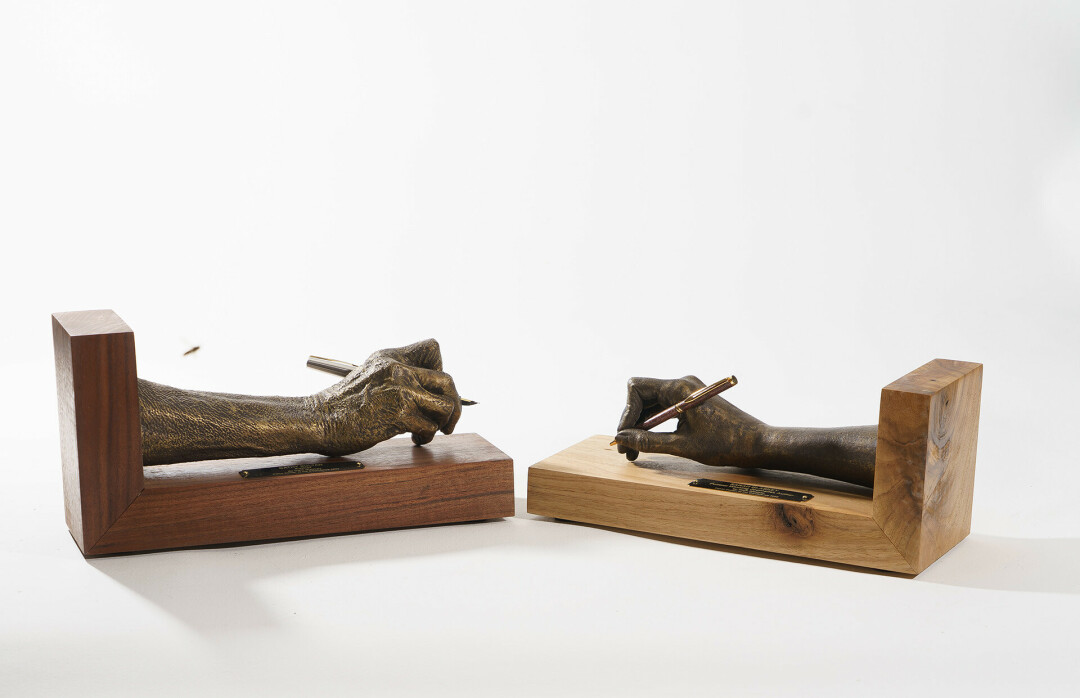 You can learn more about Blaskey’s work at markblaskey.com and more about the “Show of Hands: Notable Masters and Tools of Their Trade” exhibit at pablocenter.org.