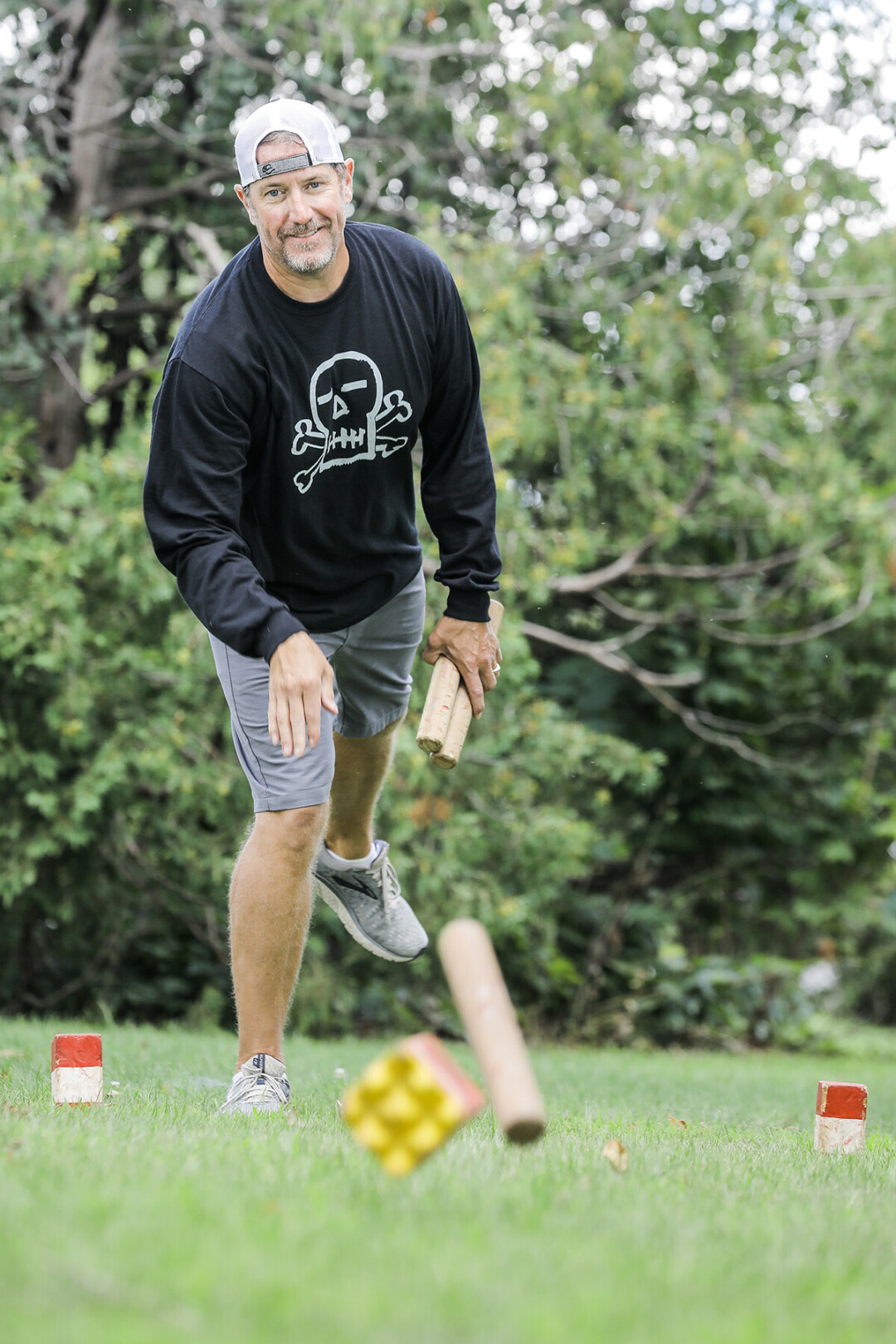 YOU COME AT THE KING, YOU BEST NOT MISS. Eau Claire's Gregg Jochimsen demonstrates his winning kubb form. (Photo by Andrea Paulseth)

Gregg Jochimsen has beaten the Swedes at their own game – twice.

The Eau Claire resident, a five-time U.S. champion in the lawn sport kubb, traveled to Sweden earlier this summer to take part in the Kubb World Championship. Not only did his multinational team – made up of two Americans, three Germans, and a Swede – win the team title, but Jochimsen unexpectedly walked away with the individual championship, too.

Considering that kubb originated on the Swedish island of Gotland, where the tournament is held, such success by an American is highly unusual. In fact, Jochimsen is the first American to win either an individual or team title in Sweden.

On Gotland, kubb’s birthplace, “Almost every family has a kubb set, so these guys are good quality players,” he said of the mainly Swedish competition. “It was crazy to be able to make the run that I made.”

Jochimsen’s run began more than a decade ago almost by accident. For about 20 years, he had played on a co-ed softball team sponsored by Ray’s Place, the fabled Water Street tavern. In the early 2000s, he and some teammates began playing a little kubb before and after softball games.

“Let’s be honest,” he said of kubb’s appeal. “It’s put a beer in your hand and play some games and enjoy being outside in Wisconsin.”

In about 2010, he saw a Volume One ad for a kubb tournament at Boyd Park to benefit Habitat for Humanity. He and some friends decided to complete, and they unexpectedly won – beating the reigning U.S champions in the process.

“At first it was camaraderie, then maybe I got too serious,” he said of his love of kubb. That fact he’d been a softball pitcher for years certainly helped with his accuracy: For those who haven’t played, kubb involves throwing wooden batons to knock over wooden blocks, called “kubbs.” He began to compete in local summer and winter kubb leagues, as well as the U.S. National Kubb Championship, which was founded in Eau Claire in 2007.

I thought that we would be successful, but there was no way I thought we would win it all. 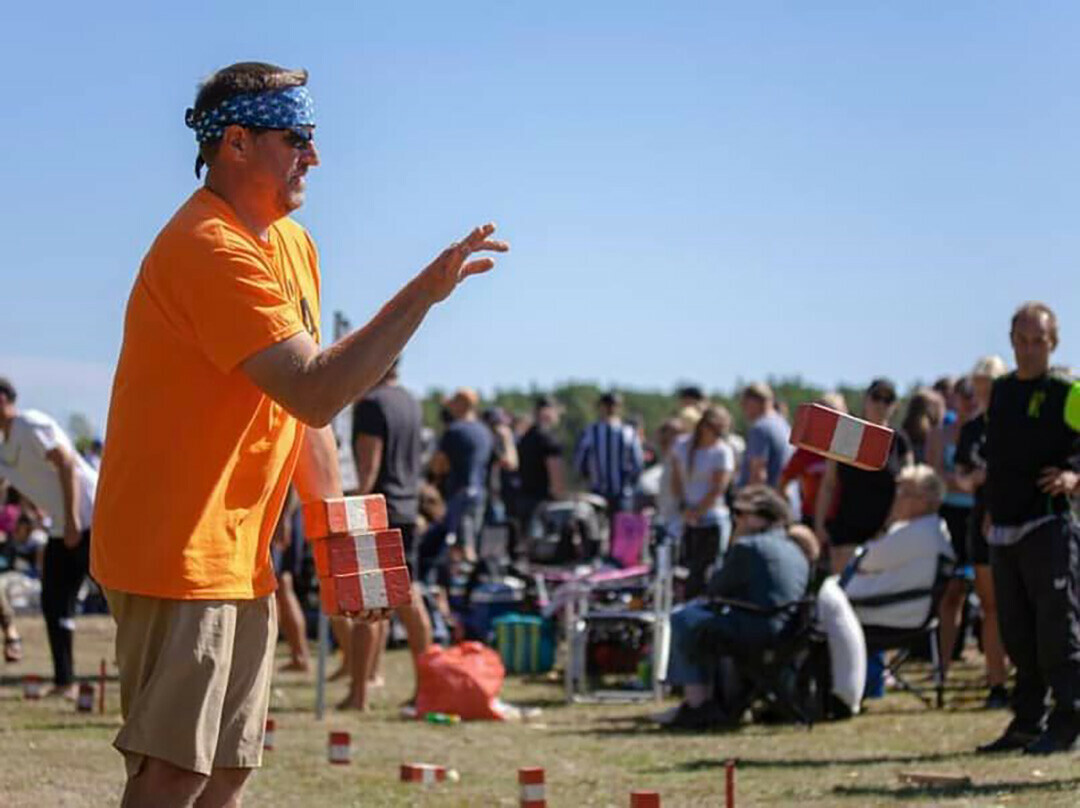 Eventually, like a handful of Americans before him, Jochimsen turned his eyes across the Atlantic. Having become friends with some international players over the years, he made plans to form a multinational team to compete at the world tourney. “We knew going in we had a pretty solid team,” he said. “We were going to play with that team in 2020 – we had our tickets booked, everything was set – and COVID kind of spoiled everything. Maybe that just gave us that hunger for the next couple of years to prepare more.”

After a two-year delay, the squad gathered this summer on Gotland: It included Jochimsen and fellow American Grant Scott of Des Moines, Iowa, as well as Peter Bergendahl of Sweden and Germans Robert Harnack, DJ Juttke, and Andreas Pieper. 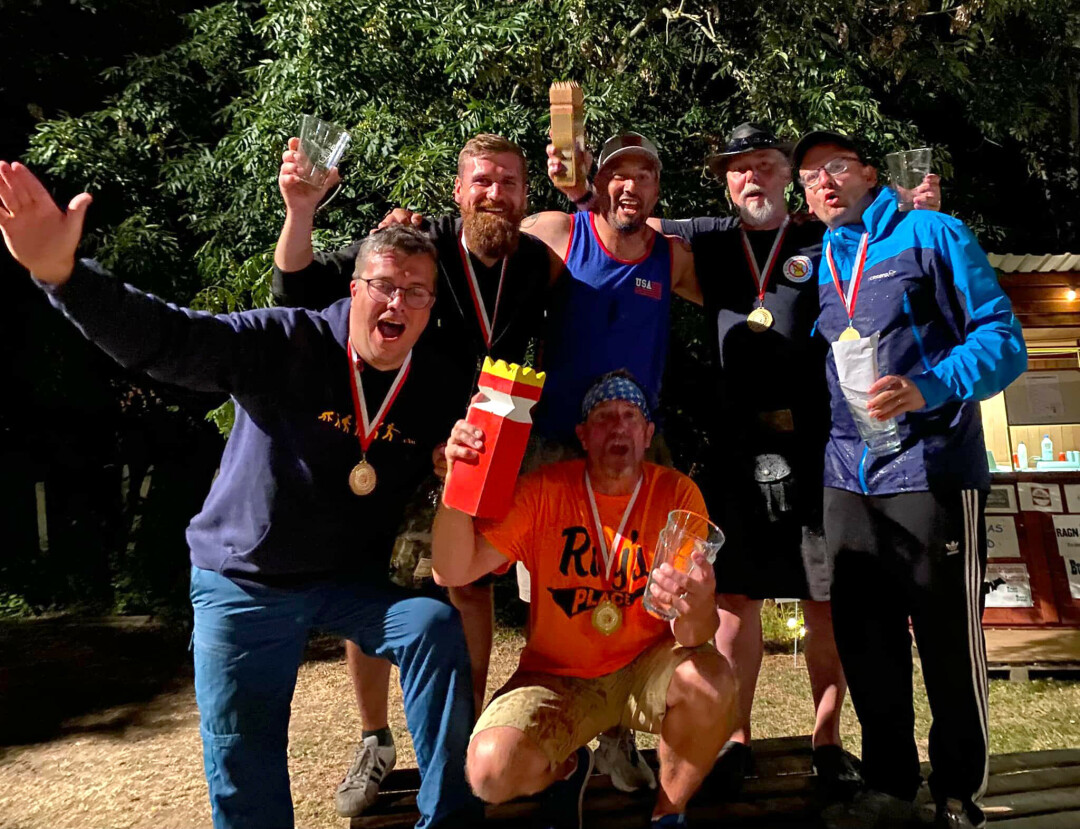 Jochimsen and his wife, Jayne, arrived in late July and enjoyed some time sightseeing with their Swedish host before prepping for the competition. The day before the tournament began, they played a test match against the previous year’s champs, a team from Belgium, and won – a promising sign for the coming competition.

“I thought that we would be successful, but there was no way I thought we would win it all,” Jochimsen said.

The next day, the team members decided to take part in the one-on-one tournament, something Jochimsen hasn’t often done. However, he managed to overcome the competition, most of whom were Swedes who grew up playing kubb in a way that American kids might grow up with baseball or hockey.

“You’re into the game, but in the end the hugs and handshakes are pretty special and meaningful, too,” Jochimsen said of the Swedes’ grace after losing to an American. “It was quite an honor to pull it off.”

On Saturday, Aug. 6, Jochimsen’s squad dived into the team competition, playing from 11am until 11pm. Their final challenge was a Swedish team dubbed Blue/Orange, which included a player who had been part of 14 world titles. Despite a raucous crowd chanting the name of the Swedish team, Jochimsen and his international squad prevailed.

“I was so pumped up and dancing in the middle of the courts,” he recalled. 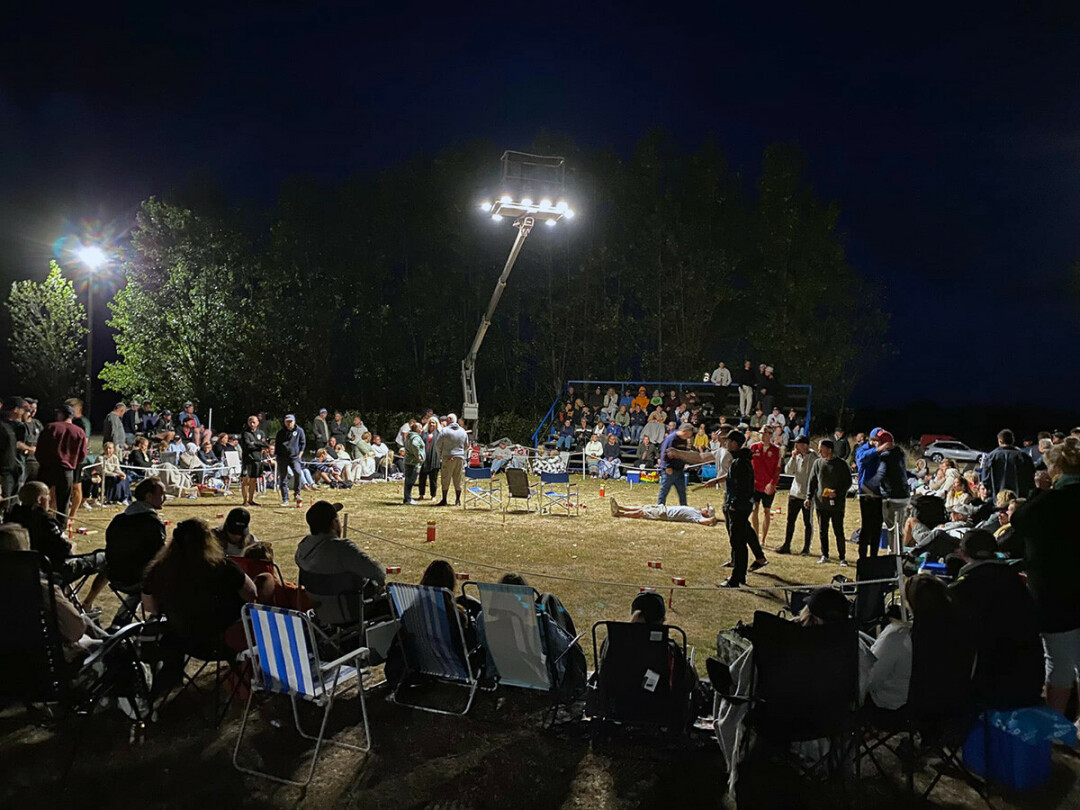 Playing under the lights at the Kubb World Championship in Gotland, Sweden. (Submitted photo)

Eric Anderson, director of the U.S. National Kubb Championship – and the man who brought kubb to Eau Claire – said Jochimsen’s success is exciting and inspirational for other American kubb players.
“Gregg doing what he did shows that we can compete at the highest level,” said Anderson, who himself was part of a team that took the silver at the world tourney in 2014.

“For Americans to go over there and play, for a lot of people it’s a once-in-a-lifetime trip,” Anderson said. “He obviously hit a home run.”

Anderson added that Jochimsen’s success will likely inspire more international players to come to Eau Claire for the U.S. championship, which is held each summer at the Eau Claire Soccer Park.

Jochimsen also hopes his victories inspire more trans-Atlantic competition – although he’s not sure about returning to the world championship.

“It’s kind of a mic drop now for me,” he said. Although he’d love to go back to Gotland to see friends and experience the island’s scenery again, Jochimsen said, “I don’t have anything to prove.”

He does, however, plan to continue competing in the U.S. championship. And he plans on using his experiences, and the friendships he’s made around the world, as teaching tools for his seventh-grade students at Chippewa Falls Middle School, where he teaches geography and social studies. His victories demonstrate that students can succeed when they put their minds to something, he said: “Here I am, a 52-year-old man, and I’m a world champion.”