TAKE A BYTE: Kiwibots Will Deliver Food on UWEC Campus

app-driven robots will roam campus with meals, and will even conquer the infamous hill 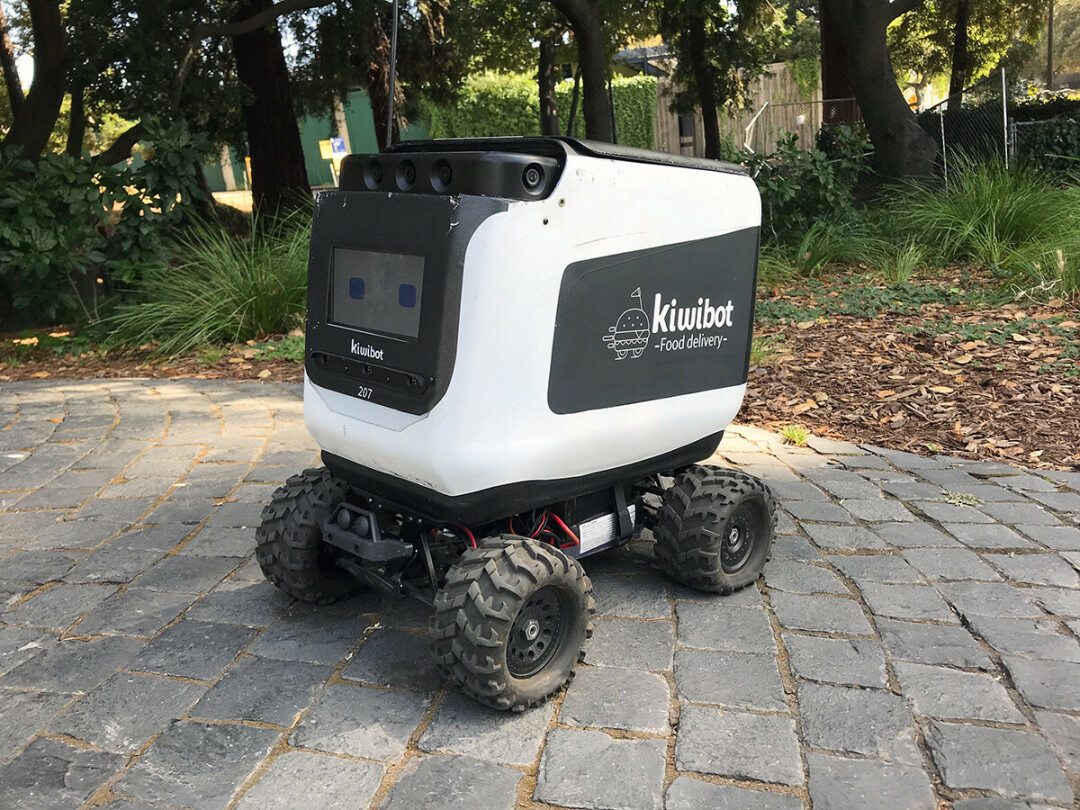 TO PROTECT AND SERVE. WELL, JUST SERVE. A Kiwibot food delivery robot like the ones that will begin operating this fall at UW-Eau Claire. (Photo by Ganbaruby | CC BY-SA 4.0)

With the fall semester starting at UW-Eau Claire after Labor Day weekend, the university will soon be flooded with new faces on its campus – and some artificial intelligence.

Kiwibots are small robotic machines programmed to securely deliver food around campuses using an app called “Everyday.” There is a small delivery fee for each transaction, and Everyday has a subscription for those who use it often. While not officially determined, it is likely that any students with a meal plan will be able to get four to six meals delivered without a delivery fee.

While campus delivery robots have slowly started picking up traction across the country, the only other campus in Wisconsin to have them is UW-Madison, which launched its Starship Bots in 2019.

The Kiwibots will be housed and charged inside of Davies Student Center and will roam lower campus during the day and upper campus in the evening. And before you ask, yes, these little bots can and will make their way up the infamous campus hill. Students and faculty ordering from the Everyday app will get a notification when the food is brought to their location and what door to go to. The bots are expected to be fully functional by Sept. 6, just in time for the new semester.

One thing we have heard from other campuses is that students become a bit protective of these bots.

The campus also enlisted the services of a company called Virtual Dining Concepts which brings the food of well-known influencers to campus for students and faculty to order on the Everyday app.

There will be three different Virtual Dining Concepts at UWEC, including Mr. Beast Burgers, individual cakes from Buddy Valastro, AKA The Cake Boss, and Pardon My Cheesesteak, a restaurant started by the creators of the Pardon My Take sports podcast. These items are exclusive to the Everyday app and the Kiwibot machines, giving more food options for people around campus.

The idea to bring these Kiwibots to campus came from an Innovation Summit in Eastern Wisconsin that was attended by some UWEC faculty, including University Centers Director Kristin Schumacher.

“We were energized and excited about the possibility of being a little bit different and unique than other UW-System campuses,” Schumacher said. “We brought the idea back to campus and everybody was getting very excited about the idea of having robots delivering food.”

Schumacher explained that one of the biggest attractions to the idea was the fact that it catches the attention of possible incoming students and shows how technologically advanced UWEC is. She also hopes that the bots become somewhat of a campus personality and said that they will likely have a campus-wide poll about naming the bots.

“One thing we have heard from other campuses is that students become a bit protective of these bots,” Schumacher said. “On some other campuses, students will become crossing guards when the bots are crossing the street or help it if it gets stuck on a curb and then its little face with flash ‘thank you.’ They just become a cool and fun part of campuses.”