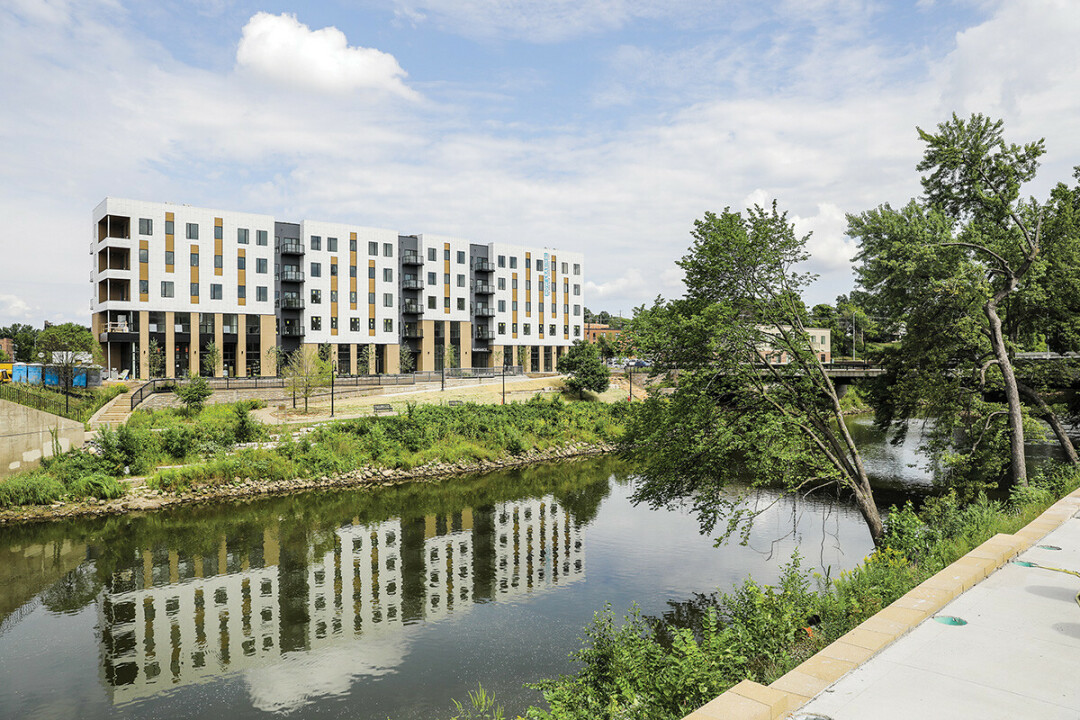 REFLECTING ON DOWNTOWN. Merge Urban Development Group’s Andante apartments are expected to open by the end of August.

“Andate” may be musical jargon for “at a walking pace,” but lately the tempo has been picking up on the apartment project by that name rising above downtown Eau Claire at 100 N. Farwell St.

The five-story building’s 76 units are expect to be completed yet this month, said Joy Hannemann of Merge Urban Development Group, the company behind the project. Pending final occupancy inspections, Andante will be 60% full by Sept. 1, Hannemann said.

Ground was broken on the building in the spring of 2021, and it has quickly risen alongside the Eau Claire River between North Barstow and North Farwell streets, on land that previously was a parking lot.

Andante is a mix of studio, one-, and two-bedroom apartments, and its location in the middle of downtown Eau Claire is a major selling point for future residents. “The segment we attract isn’t specific to an age, sector of employment, or family/student status,” Hannemann said. “We have residents from all walks of life renting at Andante. The common thread among the market segment is an attraction to a downtown lifestyle and the conveniences of renting.”

First floor amenities for residents – such as a lounge, and productivity room, and a bike room – will be completed in the coming weeks. After that, first-floor retail space will begin to fill. Hannemann said there are letters of intent out to three niche retailers. However, the “end cap” space on the building’s west side – which faces the Phoenix Park neighborhood and is ideal for a restaurant – hasn’t yet been spoken for.

Merge – which has offices in Cedar Falls, Iowa, and Madison – is also involved in an other development on the other side of North Barstow. The Eau Claire City Council recently approved a purchase and development agreement for an 11,600-square-foot parcel next to the soon-to-open Children’s Museum of Eau Claire. Andante plans to build a mixed-use building on this site, too, which will include ground-floor commercial space with 52 apartments above. Construction on this project is slated to start next spring, Hannemann said.

A few blocks to the south, another downtown residential project is also approaching a milestone. The first phase of the Seven1Five project, which includes 40 apartments, is expected to be finished by October, said Hunter Hoversholm, marketing and leasing coordinator for JCap Real Estate, the Eau Claire-based developer.

Originally dubbed Wilson Square, the Seven1Five was renamed after it was assigned the address 715 S. Barstow St. The project’s second phase, an adjacent building with 75 units, is expected to be finished next June, Hoversholm said.