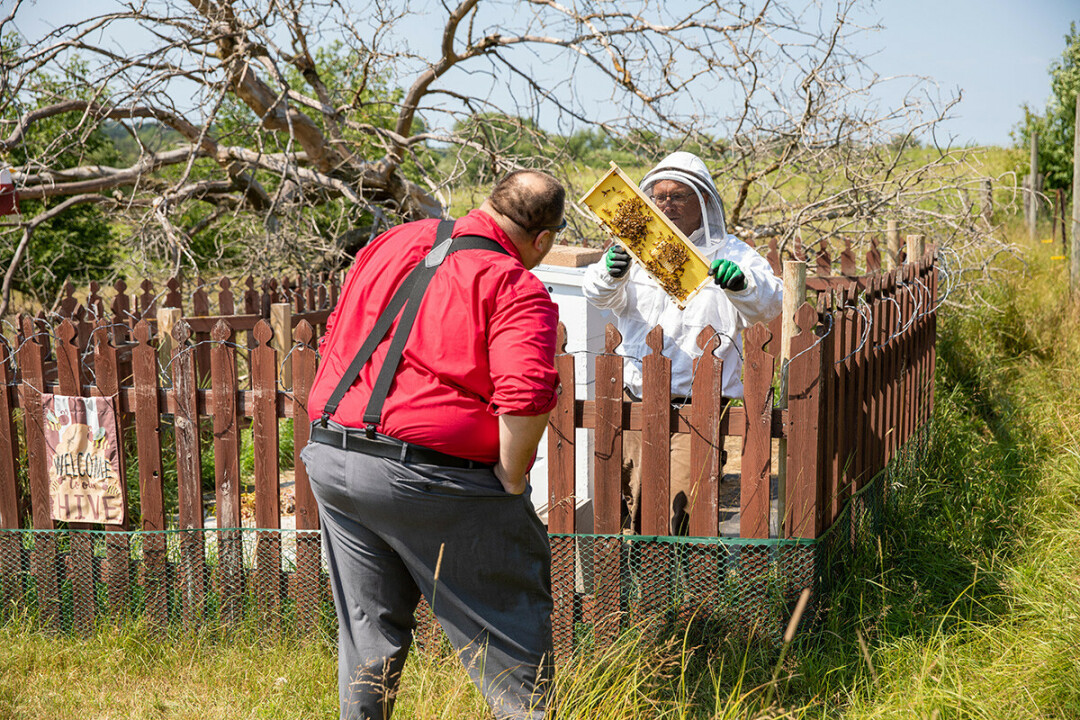 SEND IN THE BEE TEAM. Ted Simpson, of Eau Claire, excitedly shows Joe Vydrzal a portion of a frame from a beehive in rural Brackett. In one week, bees began building wax comb onto the faux comb Simpson affixed to the frame. Making combs for the bees is expected to give the bees more time to pollinate and make honey.

Ted Simpson pulled the beekeeper suit from the trunk of his car, pulled on the all-white jacket, pulled the netted hood over his head, and fastened several zippers.

He walked to the 4-foot-tall picket fence protecting two square, wooden hives. The fence is adorned with barbed wire to keep the bears out. Like Pooh, they are lured by the bees’ honey. But Simpson said the lack of cover also deters the black lumbering mammals.

Simpson has been a beekeeper for two years – by his account, a beginner to the hobby. But by nature, the Eau Claire man is passionate about saving the bees and has come up with a way to make their lives a little easier.

Simpson, 57, wasn’t simply checking on the bees for fun at the plot of land in rural Brackett the first week in August. He was taking note of the bee experiment that he dreamed up, which was brought into reality by Joe Vydrzal, a Chippewa Valley Technical College mechanical design instructor.

“The No. 1 commodity that beekeepers want more than anything else is clean honeycomb,” Simpson said. “Bees take forever to create it. You give up about eight pounds of honey per one pound of comb because it takes that much work for the bees to make the wax. Once the comb is built, they fill it with honey.

“If you could give the bees more honeycomb, they can do a lot more pollination.” 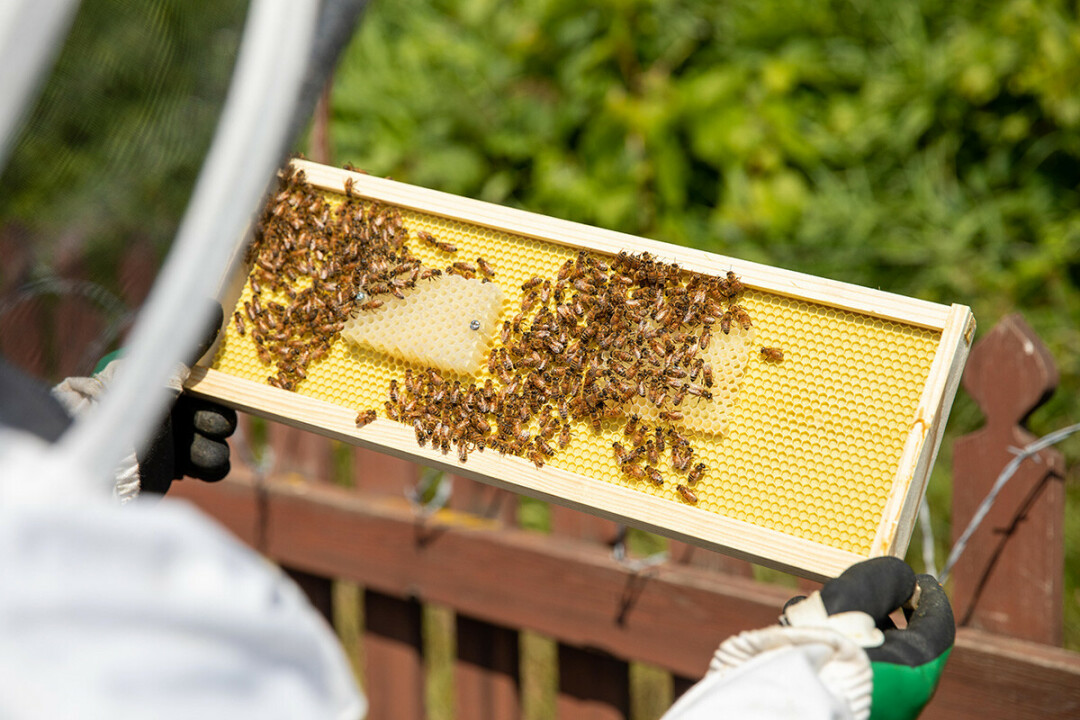 HOW SWEET IT IS. Hundreds of bees swarm 3D-printed combs that Ted Simpson dreamed up and Joe Vydrzal, a Chippewa Valley Technical College mechanical design instructor, designed and printed in the College’s prototyping lab.

Simpson, also a school bus driver, was taking students to tour CVTC’s Manufacturing Education Center. As a man who loves to learn, he took the tour with the students, and that’s where his idea was born.

To give the bees a wing up, Simpson wondered if a honeycomb structure could be designed and 3D printed, dipped in a light coating of beeswax then attached to frames in the hive. The only place he knew to take his self-described “wacky idea” was CVTC.

“I just happened to be at work one day in the prototyping lab and Ted (Simpson) walked in and started talking,” Vydrzal said. “I’m a mechanical designer by trade. I’m an instructor, so designing excites me. When (Simpson) said, ‘Let’s try to create a way for bees to be more productive,’ I was all in.”

Vydrzal picked Simpsons brain on the size of the individual combs and the thickness of the comb walls, then Vydrzal went to work designing and printing.

The 3D prototyping lab at CVTC is a way to educate students and business professionals who need courses on this type of equipment. But it’s also perfect for community collaborations like a plan to save the bees.

When (Simpson) said, ‘Let’s try to create a way for bees to be more productive,’ I was all in.

An approximate 4-inch by 5-inch 3D comb took the machine about five hours to print. But Simpson said it would take the bees so much longer.

So as Simpson entered the beehive area in the open field, he was cautiously optimistic. He had placed two prototypes of combs in the beehive for one week. He questioned if the bees would be inquisitive or ignore it.

But lo and behold, when he pulled the frame out of the box, nearly 500 bees were working to build additional comb onto the 3D printed structures. Simpson was excited to see the progress.

Although no honey was present, that doesn’t mean the bees won’t eventually produce. Simpson is going to place the frame in one of the bottom boxes where bees have already made honey in the combs to see if they will adapt to the faux combs and start producing honey there, too.

Simpson said without CVTC, this project would never have had a chance. “The college has certainly given me an opportunity to do this in which I could have never done it any other way,” he said. “Something this small and this experimental doesn’t warrant a tremendous amount of expense.”
Vydrzal said he feels like he was in the right place at the right time. The project is perfect for CVTC.
“This is the testing, right? It’s prototyping,” Vydrzal said. “It’s what we’re here for. That’s what CVTC is in my mind – helping the community.”