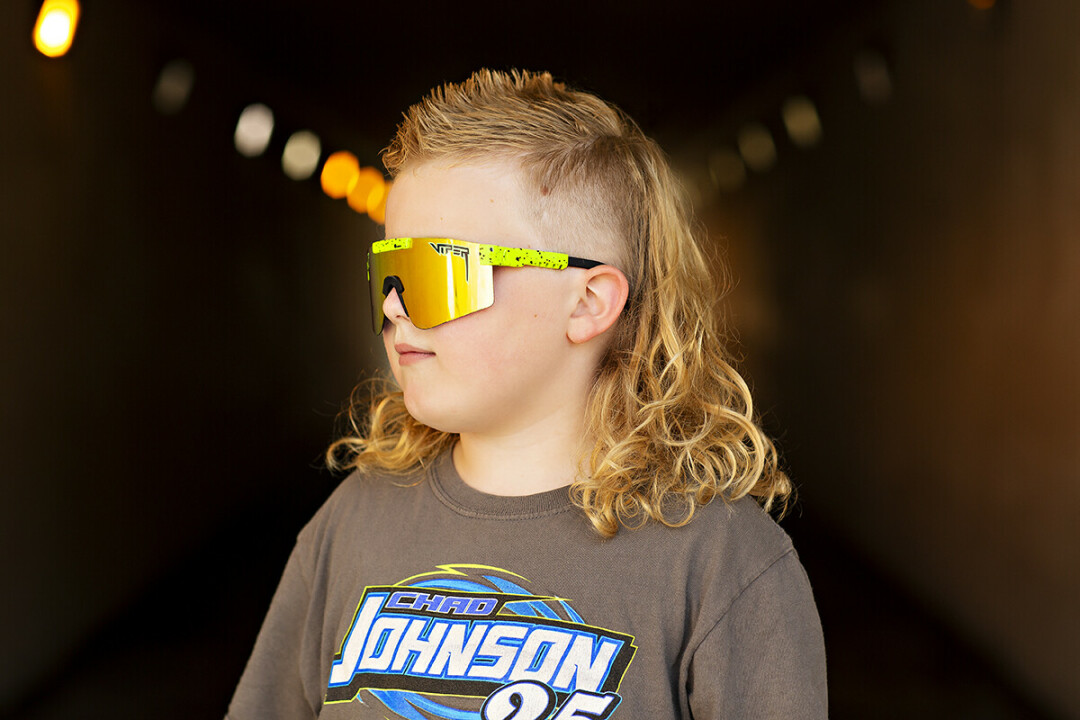 THEY CALL IT HOCKEY HAIR. Emmitt Bailey, age 8, of Menomonie, is in the Top 25 of a nationwide mullet competition. (Submitted photo)

The mullet – the business-in-the-front, party-in-the-back haircut rocked by the likes of Patrick Swayze and Billy Ray Cyrus in the late 1980s and early ’90s – isn’t just confined to the pages of old high school yearbooks. It endures proudly on the heads of men and boys (and even a few ladies!) nationwide, and one of the best examples is right here in the Chippewa Valley.

Eight-year-old Emmitt Bailey of Menomonie – who rocks curly golden locks accented by mirrored Pit Viper shades – has made to the cut to reach the top 25 of the Kids Division in the USA Mullet Championship. His proud dad, Eric Bailey, said the contest began with about 1,600 kids nationwide, and was narrowed to 25 through successive rounds of selection and voting. Final votes will be cast online from approximately Aug. 15 to 19.

Age 8, of menomonie, on why he decided to get a mullet haircut

So what inspired Emmitt to get such a hairdo? “I wanted cool hockey hair,” said Emmitt, who plays goalie on his hockey team. (Indeed, some of history’s best mullets were worn by NHL players, while an All Hockey Hair Team is selected following the Minnesota State Hockey Tournament each year.) Mullets are also popular in the auto racing scene, and Emmitt and his dad are frequent visitors to the Red Cedar Speedway and other tracks in the area. In fact, Emmitt’s goal is to take the contest’s $2,500 first prize and buy a go-kart so he can chase his own racing dreams. “I want to be out on the track, not in the stands,” he says.

Win or lose, Emmitt – an incoming third-grader at River Heights Elementary in Menomonie – is enjoying the attention. In addition to being featured in local TV news reports and earning the nickname “Mufasa” from wrestling teammates for his lion’s mane, he’s gotten freebies from race car drivers from as far away as North Carolina and and Alaska who dig his mullet.

And Emmitt isn’t the only guy from Menomonie with a head-turning mullet. Last year, Menomonie’s Josh Boyette placed third in the teen division, while Menomonie native Cale Bauer was a top 25 finisher in the men’s competition.

“We were all joking about the hair power in the little town of Menomonie,” Eric Bailey said.