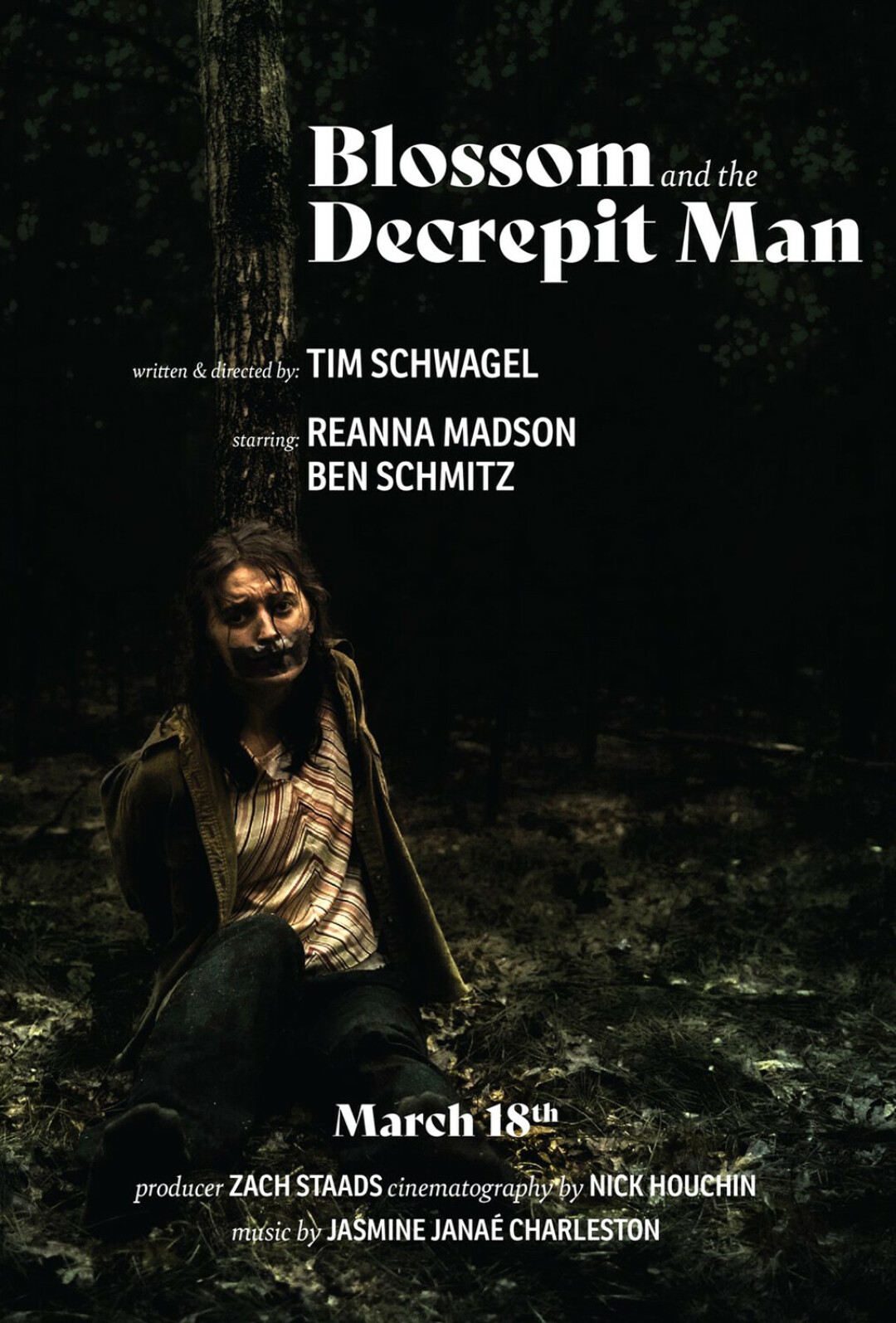 BOMBS AWAY. Blossom and the Decrepit Man is a suspenseful, not-what-you-think-will-happen short film directed by local filmmaker Tim Schwagel. Recently selected for a Milwaukee festival, the short was surprisingly shot in just one day.

Chippewa Valley filmmaker Tim Schwagel is no stranger to having his films on the festival circuit, and his latest short film earned him his first-ever spot in the Milwaukee International Short Film Festival.

Schwagel has worked on various film projects, not just as director, but also as editor and writer, stretching outside his own work and even outside traditional film, directing Them Coulee Boys’ “Midnight Manifestos” music video, among other things.

His latest film, Blossom and the Decrepit Man, stars Eau Claire natives Reanna Madson and Ben Schmitz, focusing on a crisp, daunting ticking noise and what it could lead to as Madson’s character faces it – literally – in a gloomy forest. Clocking in at just under three minutes, the short shudders with suspense, featuring a Schwagel twist at the end.

Unlike his other work, this film was shot in just a handful of hours, all in one day, with little pre-production work in order to challenge himself and those part of the film’s crew.

“A bunch of us (who worked on the short) learned how to do film stuff at the 48-Hour Film Festival at (UW-Eau Claire), so we did things really fast then and didn’t think too hard,” Schwagel explained. “We wanted to do that again, where you just have an idea and go.”

Taking on the task of a one-day film shoot would have been challenge enough, but of course, Mother Nature had to chime in as well. It rained on and off most of the day, pushing back the crew’s start time by several hours, and there was a downpour as they captured their final shots.

Though plenty excited for Blossom and the Decrepit Man to appear in the MKE Short Film Festival, Schwagel was pleasantly surprised the short also received a nod from Film Shortage as one of their “Best Picks of the Month.”

“I wanted to just put something out when it was done instead of waiting and having it run through festivals because usually if you want to submit to bigger (film fests), you can’t have it online or show it elsewhere,” Schwagel explained.

He noted how releasing Blossom and the Decrepit Man as soon as it had reached its final cut had its “pluses and minuses,” describing how it was neat to just be able to release it for folks to view quickly, but missed the chance to see it on the big screen and catch viewers’ live reactions.

He’ll be making a trip down to Milwaukee for the MKE Festival for that reason. “It’s just not the same, knowing people are seeing it versus actually feeling the energy in the room.”

Madson and Schmitz have regularly appeared in Schwagel’s previous work: Madson is easily recognizable as the lead character in 2020’s Punch Me, which did its share in the short film circuit and walked away with a Judge’s Choice Award. Schmitz has been in a lot of Schwagel’s work too.

“(Schmitz) is in a bunch of my old stuff, like in almost all of it. He’s done some acting but he should do more because he’s just so freakin’ good,” Schwagel said.

Madson and Schwagel have been working together since attending Eau Claire’s Memorial High, where they were part of the film club. Since then, they’ve run in the same creative circle, and have each delved head-first into their own film ventures.

Schwagel described how lucky he and the crew know they are, in the way they seem to have skirted around the typical conflicts most crews come across. When the Punch Me crew went to the Beloit Film Festival several months ago, they got the chance to mingle and talk with other crews. A Chicago-based crew around their age pointed out that unique characteristic.

“One (crew) from Chicago, which has a much bigger film community, said ‘How do you guys deal with egos and stuff?’ And that was a really good question, so we thought about it,” Schwagel recalled. “We were like, ‘We literally have never had an issue when it comes to arguing or credits about who did what, or things getting inflated.’ You hear about (those things) all the time in film, but it’s just never been an issue for us. We’re very lucky, and all happy to work on each other’s stuff.”

Written and directed by Schwagel and starring Madson and Schmitz, the short was produced by Zach Staads with cinematography by Nick Houchin, and music by Jasmine Janaé Charleston, the only non-local of the bunch: Her work has appeared in the likes of Lizzo’s new reality show, Watch Out for the Big Grrrls.

The Milwaukee International Short Film Festival will be held at the Avalon Atmospheric Theater on Aug. 10 and Sept. 10. Blossom and the Decrepit Man will be screened on Sept. 10 alongside a dozen other shorts. The films will be judged by a seasoned panel of three, including Jeff Old, who has worked on Academy Award-nominated films such as Titanic, The Avengers, Terminator, and more.

Visit Tim Schwagel’s official website to watch Blossom and the Decrepit Man and view his other work.