You might not expect retired stone engraver Billy Krause’s story to read like the adventures of a wayfaring musician, but that’s exactly what he is. He bought his first guitar in the summer of 1962, as he headed into seventh grade, with $15 in lawn-mowing earnings. As a teen, he performed one Friday night a month with his Regis High friends in their group, 8 Penny Opera, at Fournier’s Ballroom, the pinnacle of venues long before there was an Eau Claire music scene. Louis Armstrong, Glen Miller, Tommy Dorsey, Buddy Holly, Bobby Darin, and other legends ghosted that same stage on nights when Billy played. On weekends, he watched bands through the front window of the Wagon Wheel on Wisconsin Street or through the backdoor of the Diamond Lounge (now the Fire House). After high school, Billy hitchhiked along the East Coast with only a guitar and a duffle. He played for tips on the street, partied with other hippies, and sometimes slept in Goodwill collection bins filled with soft clothes.

Billy returned home to Eau Claire in 1971, the same year Fournier’s closed, and landed a job at Johnson Monument, where he studied under owners Don and Keith Johnson. Billy still calls Don “an incredible graniteer who knew the old-school techniques.” Billy learned the trade – manual work with the finesse of an artist – and spent the next four decades working stone with a sandblaster and chisel. He retired in 2016 from Lifetime Memorials, a subsidiary of Johnson, though Billy says, “Death was my employer.”

My nephew Mitch See went to work for Billy. For each man, a life unfolded as a “final date engraver,” someone who cuts into stone people’s last day on earth. Their handiwork may be seen in these same area cemeteries hundreds of years from now.

As a young man, Billy considered cutting names and dates as just a job. Then, he says, “I cut the first stone of a person I knew, and that changed everything. And the first time I cut an infant marker after I had children of my own, I never saw a marker for a young person the same again.”

He met his wife in 1976 at Adler’s, the bar he managed then. He remembers Margie wearing a brown corduroy jumpsuit. Just after spotting her, Billy told his buddy he was going to marry that woman. On their first date, he stood her up; but she didn’t care because she had a back-up man that night. Now, he calls her Spark, short for sparkplug, and he is her Billy Boy. They’ve been together for 43 years.

A year ago at our place, Billy pointed at a house across the lake. I told him, “Helen Sabaska lives there.”

“Related to Clark Hughes?” he asked.

“His daughter. How did you know Clark?”

“I cut his wife’s date,” he said. “We got to be friends.” This happens to Billy often. After frequenting bars and cemeteries for most of his life, he seems to know everyone. I told him Helen’s husband had just died. Like many people, Helen and Jerry invested in their stones long before they needed them – the names and birthdays were there just waiting for the final dates. But the first time Helen visited their graves, Jerry’s death date was carved onto her headstone.

“Someone wasn’t looking at his paperwork,” Billy chuckled.

During Billy’s first year of retirement, he recorded his fourth solo album, which he deemed his final one, appropriately named Last Call. His songs are like his stories: easy to listen to and woven through with observations of everyday life. One interviewer called him the Woody Guthrie of western Wisconsin. In “Ballad of Farewell,” he croons, “When I’m gone I’ll be resting in a cool dry place.”
Earlier this summer, my husband and I gathered on the patio of Lake Hallie Golf to hear Billy’s trio, The Porter Brothers, play music on a late Sunday afternoon. Between songs, he asked, “What do you get when you cross lefse and LSD?” Billy deadpanned, “A trip to Eleva.”

The crowd laughed. Before the set was over, Margie started to experience a tingling sensation down one arm. A nurse friend in the audience did a quick assessment. Margie was having stroke. Billy cut it short and rushed his Spark to the hospital in seven minutes, half the usual drive time.

Two weeks later, they come over for a pontoon ride on Lake Hallie with Bruce and me. My nephew Mitch and his wife, Abby, join us, the first time the six of us have been together since Mitch and Abby’s 2017 wedding when Billy played at their reception.

I ask Margie how she’s doing. “Oh, I’m fine,” she says over a glass of wine. “I just gotta take a baby aspirin.”

Billy has been managing his blood cancer for a while, but Margie’s sudden stroke rattled them both. Billy tells me, “No matter who goes first, we’re gonna have one hell of a party.” Ironically, the master headstone carver and his wife will be cremated; they do not plan to have their own markers made. “We’re not cemetery visitors,” Margie says.

I pontoon the six of us down Lake Hallie to see Clark Hughes’s old farmstead, playing tour guide on this lake I adore. I can’t hear the men, but I watch Mitch rub the back of his hand across his beard, the way he does when he’s thinking.

Like Billy, Mitch respects the work he does and his old mentor. I gave Mitch a pocket notebook to write what he sees on the job and record the kind of stories Billy used to relay: about being alone in a cemetery, cutting the final date of a person’s life in stone, how humbling it is to be what Billy calls “the last audience to that last act of that life.”

Months after Billy retired, Bruce and I took Mitch and Abby to dinner. Old friends joined us at the table. “How do you all know each other?” someone asked. 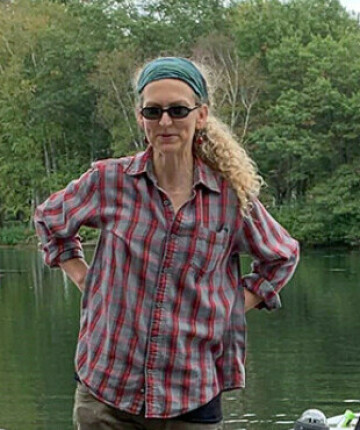 This essay by Patti See appears in Here on Lake Hallie: In Praise of Barflies, Fix-It-Guys, and Other Folks in Our Hometown, published in 2022 by Wisconsin Historical Society Press, and available from wisconsinhistory.org, at Volume One’s Local Store – where she will be reading on July 20 – and elsewhere. For more by and about Patti, go to her author page at VolumeOne.org.