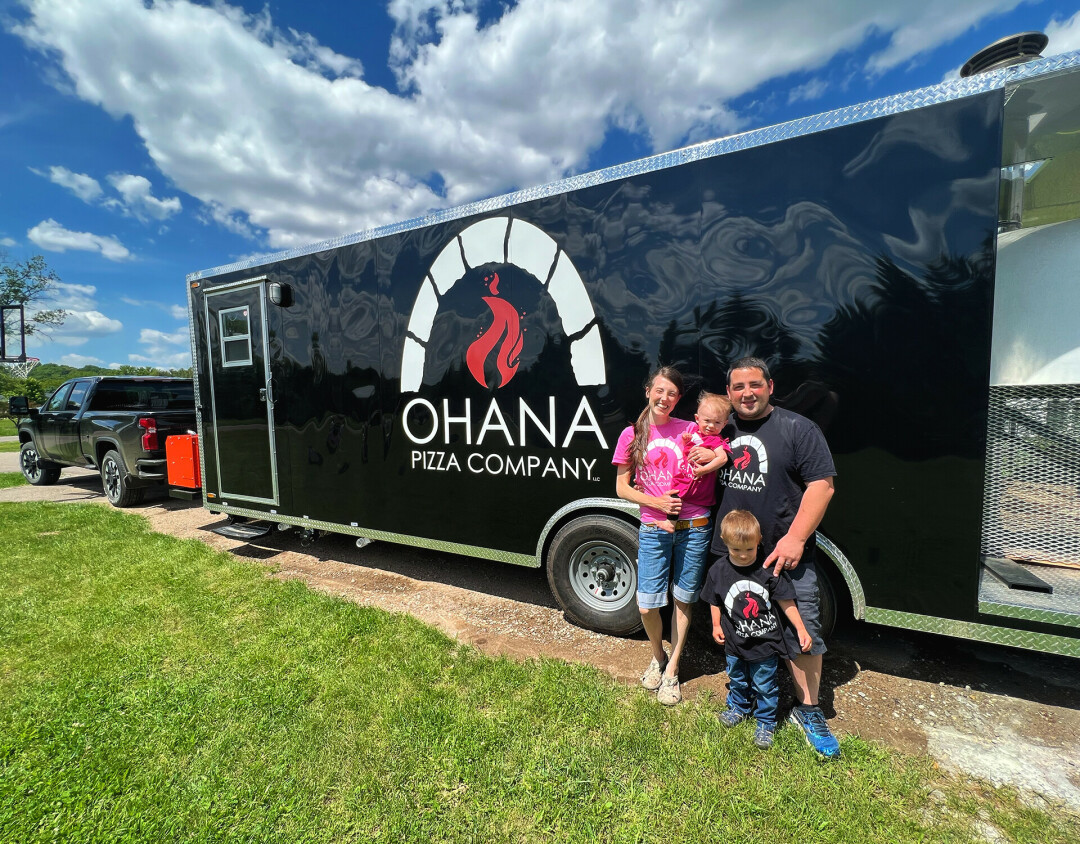 GET FIRED UP. Ohana Pizza Co. food truck is launching to the public on June 25, serving up wood-fired pizza and shave ice. Pictured are the owners, Jenni and Brandon Balts, with their littles.

For this local family, visiting their favorite place – Hawaii – and eating the local cuisine didn’t just give them years of memories, it gave them inspiration.

Ohana Pizza Company food truck owners Brandon and Jenni Balts are Wisconsinites through and through. Brandon grew up in Cameron before making his way to Eau Claire for college and now works right in town. Jenni grew up in E.C. too, graduating from Memorial High School before meeting Brandon a few years after and putting roots down in the area.

“It all started probably in 2012. That’s when me and my wife got married,” Brandon said. “We were supposed to go out to Montana for our honeymoon, but at the last second, we said, ‘Hey, let’s go to Hawaii!’ [We met] a guy who does kind of the same thing, so that’s where the initial spark was from. After that, we just kept going back every year to the same place and just picking the guy’s brain.”

After nearly a decade of visiting the Hawaiian Islands, Brandon decided to truly invest in the Hawaiian food they’d come to love: wood-fired pizza. Brandon bought a small wood fire oven of his own to start honing his craft. He parked the oven right on the family’s back porch.

With a friend in tow, Brandon headed to Las Vegas this past year for the International Pizza Expo, a multi-day conference featuring more than 90 demonstrations, workshops, and networking sessions with a show floor larger than eight football fields. People love their pizza.

After attending a day of the expo, Balts had been able to ask enough questions and talk to enough pizza masters to know he was ready to dive into the pizza-making world, but he didn’t necessarily want to open up a restaurant.

Having connections with a few restaurant owners and food truckers in town, Balts was able to spend time in a local food truck to really see what the vibe of it was – and he loved it.

After coming back from the expo with even more knowledge and fire in his belly, he reached out to several businesses he’d heard of there to start diving into what it would take to execute the ideas he had for a pizza-making machine. After Jenni created their logo and the trailer was on its way to completion.

Ohana Pizza’s food will, of course, include cheesy, crispy-crust pizza goodness, but it will also serve homemade shave ice. With 24 flavors, the Hawaiian shave ice is made with pure cane sugar, making for a light yet flavorful sweetness served up in a flower-shaped container with a wooden spoon.

“I’m a sour blue raspberry (flavor) guy,” Balts said. “My wife would say Tiger’s Blood, which is coconut and a couple of other flavors mixed together. My youngest (child) loves the banana.” The owners said these made-from-scratch shave ices will be sold for around $5, heaped with shave ice and pumps of their delicious flavoring. As the Balts put it, shave ice is Jenni’s expert arena, while one of Brandon’s “favorite things in the world” is pizza.

Served up as 10-inch individual pizzas, Ohana Pizza will start out with 10 wood-fired varieties: classics like pepperoni, cheese, and sausage, plus their “carnivore,” “aloha,” and chicken bacon ranch styles. Each will be between $9-$12.“We make everything by hand, whether it’s our dough, our sauce, our syrups for our shave ice, the ice we make,” Balts said.

While the duo does not grow their own toppings or make the cheese, they do their best to source it from high-quality vendors. Utilizing a tip he picked up from the pizza expo, Balts said he kept hearing pizza creators talk about Grandé Cheese, noting its gooey goodness, perfect for pizzas.

“We didn’t want to sacrifice our cheese; A lot of cheeses are coated in cellulose. ... In the oven, they just burn quick,” Balts said. “So (our cheese is) really nice, really gooey goodness.”

The Balts’ dough is their very own recipe, made with just four ingredients. 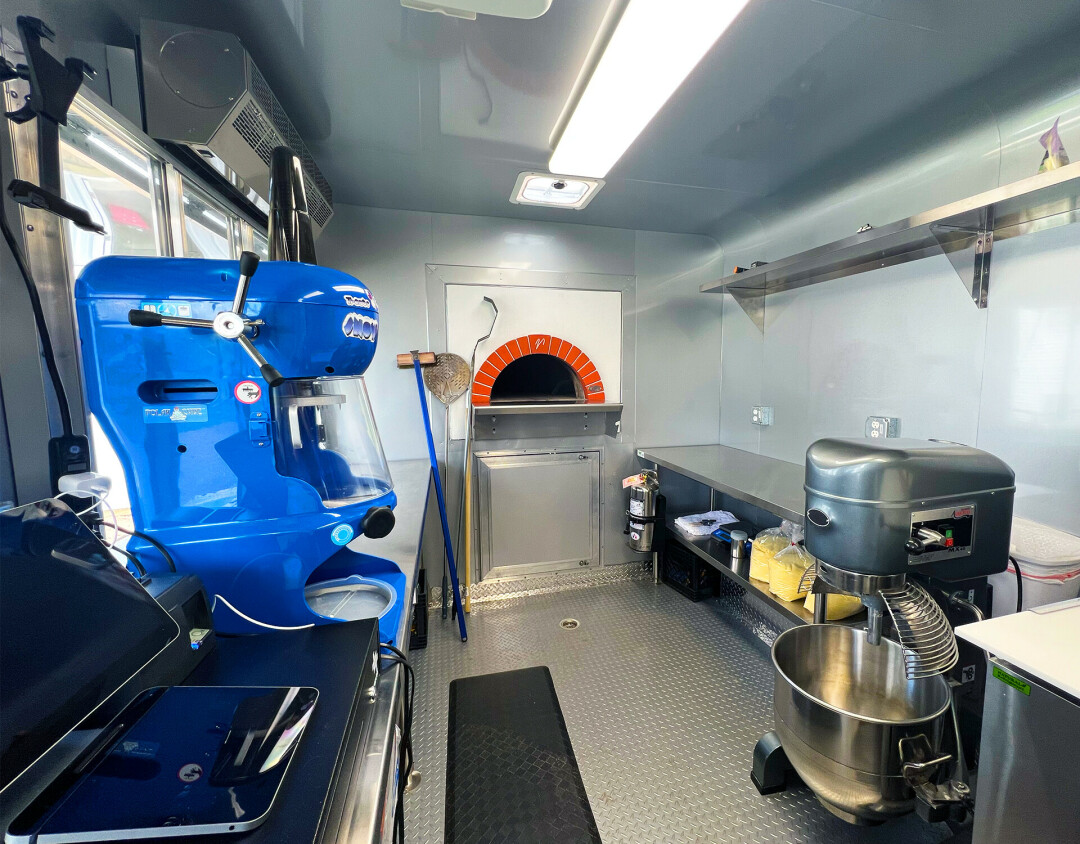 THINKING OUTSIDE THE PIZZA BOX. Ohana Pizza's food truck has a wood-fire oven built right into it, which will run at 900 degrees and pump out their pizzas in about a minute and a half. Also pictured is their giant dough mixer and shave ice machine.

“We stretch the dough and a lot of resources went into just dough fermentation, using good ingredients,” Balts said. “It’s literally just water, salt, yeast, and flour, so there’s nothing else in there – no preservatives, none of that scary or weird stuff. We wanted to stay away from all that.”

After demo-ing their wood-fired pizza to neighbors and friends for several weeks, offering them pizza for their honest feedback on the dough, sauce, and overall taste, their first event was a private block party (yes, they cater events too!) in the middle of June. Ohana Pizza’s first public event will be at Royal Credit Union’s Rock the Riverfront-Charity Classic this Saturday, June 25, in downtown Eau Claire.

The Balts are starting out their new food truck venture with a few family friends working with them, and are incredibly excited to offer their longtime community Hawaiian-inspired, good-value grub.

To learn more about Ohana Pizza Co. and get in touch, visit their website or Facebook page.