Editor’s note: This essay was written by longtime Eau Claire resident Marty Crowe while he was a teacher at Catholic Central High School in Marinette. It was originally published in the Capital Times on April 27, 1960.

One more group of educators met the other day. (An educator it seems, is a teacher who is afraid he isn’t impressive enough unless he has a more significant title.)

This one came up with the idea of more emphasis on science, mathematics, and English. This proposal is getting to be the cliché of the profession. This is new as an old joke. And just about as tired.
But this solemn panel added a touch. They would do away with the “inanity” of “social studies” and go back to “good old civics and history.” Well, now, there’s one.

The one great mark of most star students in high school this day is their ability to repeat and remember. Most of them lack something else – the ability to think and the urge to come up with a creative idea.

Quiz shows and “objective tests” and other forms of intellectual silage have led many a lad to believe that the one who can memorize the words on a list – the one who can fill in the blanks – is the learned one and wise.

Civics and history – and good and old both may be – are two courses which have traditionally paid dividends to the kids with a photographic mind.

“Social studies” deals with inane subjects such as race relations, family problems, hunger amidst plenty, crime. It takes a look at the lame and the hungry and the blind – and the lonely and the desperate and the lost. The man without a cause or a hope or a dream or a name. It has a gander at communism and fascism, and it raises some questions about war and peace.

It tells no one how to make the big bomb but it reminds all the results of using one.

The subject may be an inanity but, but I would remind you educators that it asks the questions that had better be answered – and fast.

It is easier to build a bomb than to know what to do with it when it’s done. It’s easier to learn how to fertilize the soil or even to irrigate the desert than it is to discover a way to get the food out of storage and into the mouths of the hungry.

The answers are on no list and there is no formula to be memorized for Friday.

A man must be 35 to be eligible to be president and the civics box will say so. Cornwallis called it a day at Yorktown and General Lee gave up his sword at Appomattox Courthouse. Your history book says it and I guess it must be so. Mine said it, too.

But they’ve been mowing old men down outside Johannesburg and councils of white men meet outside Atlanta to plan dark deeds. The French have their bomb and the Chinese want theirs. And there are many fresh graves in Budapest.

Social studies raise the questions why. And also, where to and what next.
These are good questions. I think.

Civics won’t. History should but it never has. Social studies might.

I better end this now.

Sure, I teach social studies. It’s not my major, though, whatever that is. (Some educator can tell you.)

It’s my minor. Whatever that is.

You know what my major is?

That ought to set all right with the educators since next to science and math, English was recommended when the panel sat around the table.

What the educators mean by English, I suspect, is how to spell and how to punctuate and all that jazz. Some educators might say the kids should write things because they should learn to express themselves. A theme a week, some educators say. Maybe two a week would be twice as good.

One trouble, I think. One fly in the ointment, educators. That’s a cliché, too. But that is ointment you have there isn’t it?

The fly is this.

You teach a kid the words and the commas and the population of Pittsburgh and how tall was Lincoln and how many studs will the cylinder hold and then you say you’re ready. You say write me a theme.

Trouble is the kid hasn’t looked in the eyes of a lonely man or a hungry child. Trouble is the kid has seen an Indian on television but not on a reservation. Kid hasn’t seen what pride is like after it’s dead. Kid has never seen six in a room at the county hospital – nor heard how it sounds. Kids know what the general says about the bomb – what the physicist says. But he doesn’t know what the mother in Nagasaki said that one day. Nor why.

You’ve taught the kid to write. Trouble is he has nothing to say.

Social studies might help him. I think. It might not give him answers – civics does that – but it would give him questions civics doesn’t even know exist.

The questions are a beginning, I think.

When I taught English many of my kids could do a good job in spelling and punctuation and they could diagram a sentence with the best.

But I asked them once what Coleridge meant when he wrote: “He prayeth best who loveth best.”  And what Shakespeare had in mind with: “The quality of mercy is not strained.” And, most of all, what Christ was driving at when he said: “The meek will inherit the earth.”

Do you know something? Nobody had an answer. The best sentence diagrammer in the class couldn’t tell me. And the next year it was the same. And the year after that.

So, I shifted to social studies. I think maybe that’s where Shakespeare belongs too. And Coleridge. I know Christ does.

Because it’s a subject that provides no pat answers. But it raises the hard questions.

And that, I think is something. 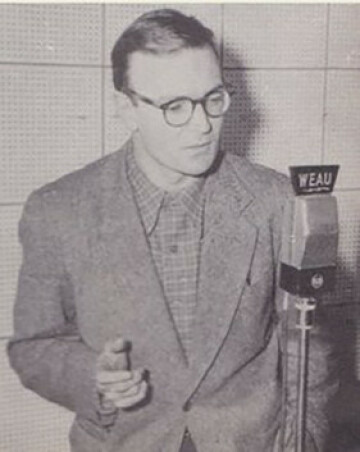 Marty Crowe (1914-99) came to Eau Claire in 1946 to teach and coach at St.  Patrick’s High School.  In those early days, he acted and directed in community theater and had a popular radio show.  Marty purchased a Victorian home in the Historic Randall Park Neighborhood that remains in the family today.  In 1950 the house became home to the first two black players to play for the Eau Claire Bears baseball team, Billy Bruton and Roy White. Marty taught English and social studies in Wisconsin and Minnesota high schools for more than 50 years, returning to the Chippewa Valley, McDonnell and Regis high schools, in the 1970s and ’80s. He wrote plays and was working on a book on education. He wrote frequent opinion pieces that were published in newspapers and magazines around Wisconsin and Minnesota, writing about militarism and the Vietnam War, youth, education, and social issues such as racism and poverty.