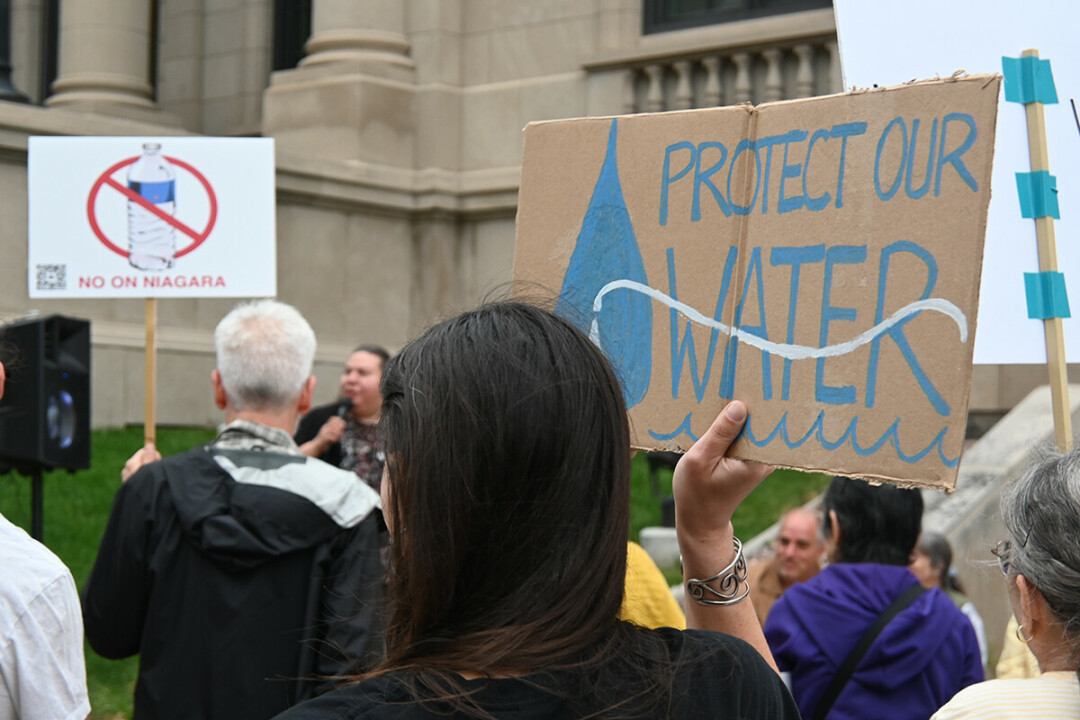 NOT KEEPING THEIR OPPOSITION BOTTLED UP. Critics of a proposed development agreement with Niagara Bottling rallied outside Eau Claire City Hall on Monday, June 13.

[UPDATED WEDNESDAY, JUNE 15] – A California-based company has dropped plans to build a water bottling plant in Eau Claire – at least for now.

Niagara Bottling Co. told the city Tuesday that it wanted to pull its proposed development and use agreement with the city, which would have authorized a plan to break ground on a 500,000-square-foot water bottling facility in a city industrial park next year. The company was expected to invest about $100 million in the project, which in its first phase would have used about 4.5% of the water the city pumps annually (that’s 155 million gallons).

The move by Niagara – which had been negotiating with the city through a subsidiary, Purple Rain Properties – came less than 24 hours after a public hearing during which the overwhelming majority of residents who spoke to the City Council criticized the proposal deal.

After Aaron White, the city’s economic development manager, announced during the meeting that Niagara had requested the withdrawal, the City Council voted unanimously to table the proposal indefinitely. City Attorney Steve Nick told the council that it could reconsider the proposal during the coming year only if Niagara made a substantial change to it.

Before voting, City Council members expressed their opinions about both the merits of the project as well as the process that brought it to public attention. The council had originally been slated to vote on the plan three weeks earlier, just days after it was announced to the public.

City Councilmember Andrew Werthmann said he felt there was a “breakdown in trust” in the process. “That came when in my first meeting with the company, they explicitly said that their preference would be for the public to find out after the council voted on this,” he said. “I said in our meeting … ‘That’s not how we do it in Eau Claire. We don’t pass things and then tell the community afterward.’ ”

Werthmann said he’s glad the City Council took the time to postpone the process, which gave passionate members of the public a chance to speak out on the topic. Constituents who contacted him overwhelmingly opposed the water deal, Werthmann said. He added that he hopes the city will soon create a water protection plan to shape future water usage and how the city will approach future inquiries from large water users like Niagara. In addition, he said, he would prefer that future development agreements include sunset clauses that would allow the council to review deals with large-scale water users periodically.

Councilmember Emily Anderson said she hoped “this is the beginning of a conversation and not the end of it.” She acknowledged city officials’ desire to attract new business to the community as a way of expanding the tax base – one of the few ways that Wisconsin municipalities are allowed to generated additional revenue. “We know that our game is sort of rigged and set up so that if this city is not a growth machine, we’re not going to be able to continue to provide essential services that people really need,” Anderson said. “And so we need to have some conversations as a community about what directions we want to go.”

Another City Council member, Jill Christopherson, said she was disappointed that council members won’t be able to vote to show their support or opposition to the proposed plant, which she said “would have been an excellent addition” to the community.

“We can always choose to be anxious and fearful about change in our community. That’s always a possibility,” she said. “But it takes a lot of preparation and trust in the staff that is trained and has vetted these (proposals), to see that there are opportunities, that the staff has been developing over decades, in order to accept industry into our community.”

The Eau Claire City Council is poised to vote Tuesday evening on a controversial agreement with Niagara Bottling, a day after lengthy public hearing that was largely composed of comments critical of the deal.

Under the proposed development agreement, the California-based firm would build a 500,000-square-foot water bottling plant in Eau Claire’s Gateway Northwest Business Park, which would use 155 million gallons of water annually. A second phase of the project could expand that share to 310 million gallons, or 9% of the water the city pumps each year.

Before the Monday, June 13, public hearing, opponents gathered outside City Hall, hoisting signs with messages such as “No on Niagara” and “Protect Our Water.” Inside, a total of 21 people addressed the council about the bottling proposal, only two of whom spoke in favor of it.

Opponents of the agreement told council members they were concerned about the potential environment impact of the bottling plant, both in terms of the water it would use and the millions of plastic bottles it would fill.

Just because we currently have an abundant amount of water doesn’t mean we should try to use it all.

“Just because we currently have an abundant amount of water doesn’t mean we should try to use it all,” said Eau Claire resident Joshua Reed.

“Is it wrong to bottle water in single-use plastic bottles?” he continued. “Does Eau Claire want to be part of such actions? If yes, then please stop talking about sustainability as part of Eau Claire’s goals.”

City officials have said the agreement will help the city, creating an estimated 58 jobs and bringing in about $1 million in property taxes annually as well as up to $650,000 in utility payments. Some of these funds will be used to pay for a sustainability coordinator, City Manager Stephanie Hirsch has said. In addition, city officials have said the bottling plant “is unlikely to affect the water supply in Eau Claire.”

Eau Claire resident and UW-Eau Claire student Matthew Lehner said he was outraged that the city would even consider allowing Niagara to build such a facility.

“I was shocked that this city, which claims to pride itself on sustainability and ethical practices, would even entertain a project such as this,” Lehner said. “It defines hypocrisy at the highest possible level.”

Scott Rogers, vice president for governmental affairs for the Eau Claire Area Chamber of Commerce, was one of the few speakers in favor of the agreement. Rogers noted that the Niagara development doesn’t require a city subsidy to create good-paying jobs, and it will also boost the community’s tax base. He said rejecting the agreement could set a bad precedent for future efforts to draw businesses to Eau Claire. 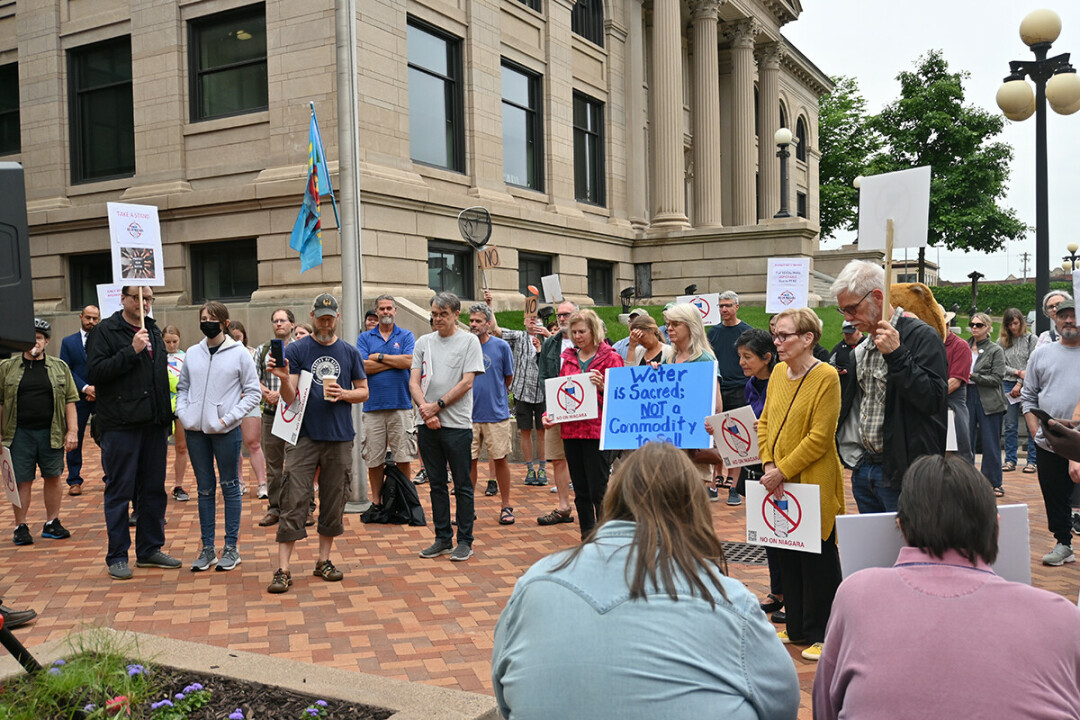 SPEAKING UP. About 40 residents gathered for a rally opposing the pending agreement with Niagara Bottling.

“We do believe that it is a legitimate concern that turning down a well-vetted and responsible agreement like this could have a chilling effect on our ability to attract future economic development,” Rogers said.

Kate Van Sloten, an Eau Claire resident and member of the environmental task force for JONAH, a local community action group, said the City Council should act to protect the local water system and needs to commission a new water conservation plan. The council shouldn’t consider decisions that could have a major impact on natural resources without consulting bodies such as its Sustainability Advisory Committee, she said. Instead, she said, said the city should emulate the eight states bordering the Great Lakes, including Wisconsin, which enacted the Great Lakes Compact in 2008 to protect the region’s water.

“They were worried about the depletion of the great lakes,” Van Sloten said. “Our aquifer is so small in comparison.”

The public hearing ran for nearly 90 minutes, and consisted largely of residents arguing against the Niagara agreement. During such hearings, members of the City Council are not allowed to ask questions or respond to members of the public. However, they will debate and vote on the Niagara Bottling proposal during their legislative session today (Tuesday, June 14), which begins at 4pm in the council chamber at City Hall, 203 S. Farwell St.

Residents can view the agenda for the meeting here or watch the proceedings live online. The City of Eau Claire has also assembled documents about the agreement here.