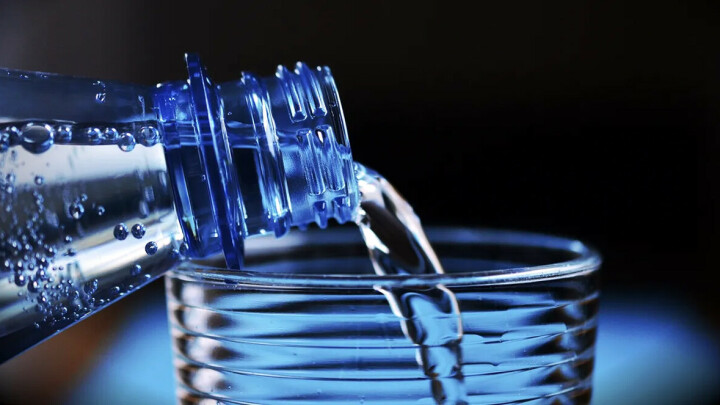 “Project Horseshoe” – the confidential nickname used to negotiate a deal between the City of Eau Claire and Niagara Bottling Co. — will mean good economic luck for the community, city officials contend. However, some residents are concerned that the project, like a poorly tossed horseshoe, misses the mark.

The agreement to allow the California-based firm to build a water-bottling plant that could use up to 9% of the water coming from city pumps is slated to go before the Eau Claire City Council for approval on Tuesday, June 14.

City officials who negotiated and support the pending deal say it will be an economic boon to the city, drawing in more than $1 million in annual revenue for a special taxing district as well as up to $650,000 in utility payments each year. These officials joined environmental advocates, who expressed doubts about the city’s optimistic projections, at an informational meeting about the proposal held at Hobbs Municipal Ice Arena on Tuesday, June 7.

The forum – which was facilitated by JONAH, a faith-based community organizing group – featured 10 panelists and drew more than 100 spectators, including volunteers collecting signatures on a petition opposing the plant.

We need industry. If we can support their operations, we should embrace them.

Arguments made in favor of striking a development agreement with Niagara boiled down to economic development, increased tax revenue, and added jobs.

“We need industry. If we can support their operations, we should embrace them,” said Lane Berg, the city’s utilities manager. “They do provide great jobs, they increase our tax base, they fund programs and services. Those things are vital for a growing community.”

Berg said the city has been in negotiations with Niagara since late 2021, but that the process was kept confidential until recently because of its competitive nature. It was only revealed to the public a few days before a May 24 City Council meeting when it was initially slated for approval. After public pushback, council members voted to delay the decision until June 14.

The proposed plant would cover 500,000 square feet and would be on 30 acres in the Gateway Northwest Business Park, an area that also includes Chippewa Valley Technical College’s Gateway campus, Minnesota Wire, and Nestle.

Berg said that the initial phase of the plant, which Niagara hopes will be up and running by the end of 2023, would use 425,000 gallons of water a day, or about 155 million gallons annually. That’s 4.5% of the water the city pumps. A second phase, to be completed in six to eight years, would double that figure to 9% of the water the city pumps, or 310 million gallons annually.

Berg added that a 2014 survey by local engineering firm SEH found no concerns with the city’s aquifer, but led to infrastructure improvements that saved 93 million gallons a year. In addition, the study found that the aquifer could meet an additional water demand of 765 million gallons annually.
“We’re fortunate to be in the glaciated northern central region of the U.S.,” Berg said. “This area has geologic and climatological conditionals that support aquifer productivity. In short, we receive adequate precipitation, and our soils promote water storage and travel.” 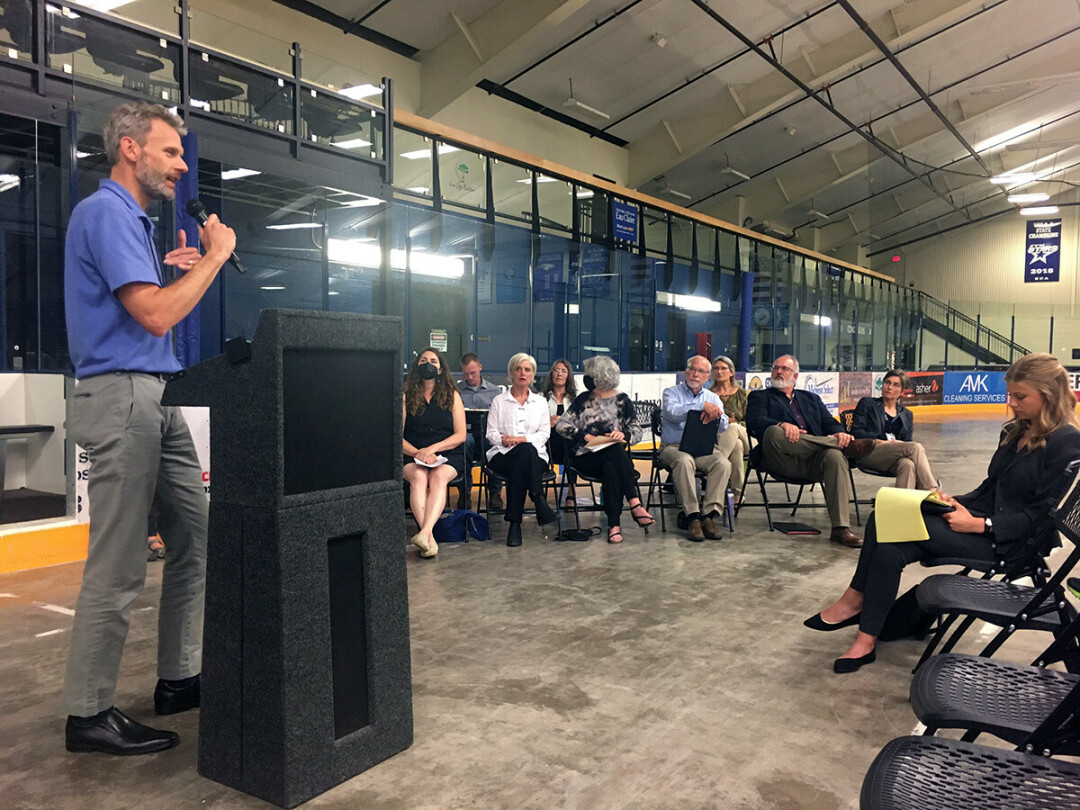 WATER WORDS. Ned Noel, senior planner for the City of Eau Claire, was one of the speakers at a June 7 panel discussion about a proposed Niagara Bottling Co. plant. (Photo by Tom Giffey)

Dr. Sarah Vitale, a hydrogeologist and assistant professor of geology at UW-Eau Claire, also spoke about the local aquifer, expressing concern that not enough is known about the potential impact of the proposal on the area’s water resources.

While the Eau Claire area has an abundance of water, Vitale said, “There are many water-rich regions with similar aquifer conditions” – including in central Wisconsin and parts of Minnesota and Michigan – “where over-pumping or drought have become problematic.”

Vitale said a comprehensive study needs to be made of groundwater flow and quality in Eau Claire County is needed. Such modeling and mapping hasn’t been done in about 30 years, said Vitale, who also serves as a member of the Eau Claire County Groundwater Advisory Committee.

“We need to have a better understanding of what our current water resources look like as well as best- and worst-case scenarios for projected climate change, population growth, and industrial water usage as recommended by Eau Claire County groundwater experts,” Vitale said.

I’m very pro-economic development, but I think it has to be done in a very wise way.

Other speakers questioned the environmental impact of the plant, noting that it would fill more than a million single-use plastic bottles a day. According to the U.S. Environmental Protection Agency, fewer than 30% of such bottles are recycled.

Still others raised the issue of PFAS – perfluoroalkyl and polyfluoroalkyl substances – sometimes dubbed "forever chemicals,” which were detected last year in Eau Claire’s water supply. Panelist Mickey Judkins noted that while the city says it could meet Niagara’s water needs even if half of the city’s wells were shut down, the city is already in such a situation: Currently, eight of the city’s 16 wells aren’t being used because of PFAS contamination.

“I’m very pro-economic development, but I think it has to be done in a very wise way,” said Judkins, an Eau Claire business owner and former official in the Wisconsin Department of Commerce under former Gov. Jim Doyle. “I’m really concerned that we may not be making a good decision about our water supply.”

Companies such as Niagara known that water is one of the region’s greatest natural resources, and they will continue to covet it, Judkins said.

“Everyone in the industry knows that we have the best water in the world, and we need to safeguard it,” she said. “If it was oil, people would understand it, but because it’s water, we undervalue it and take it for granted.” 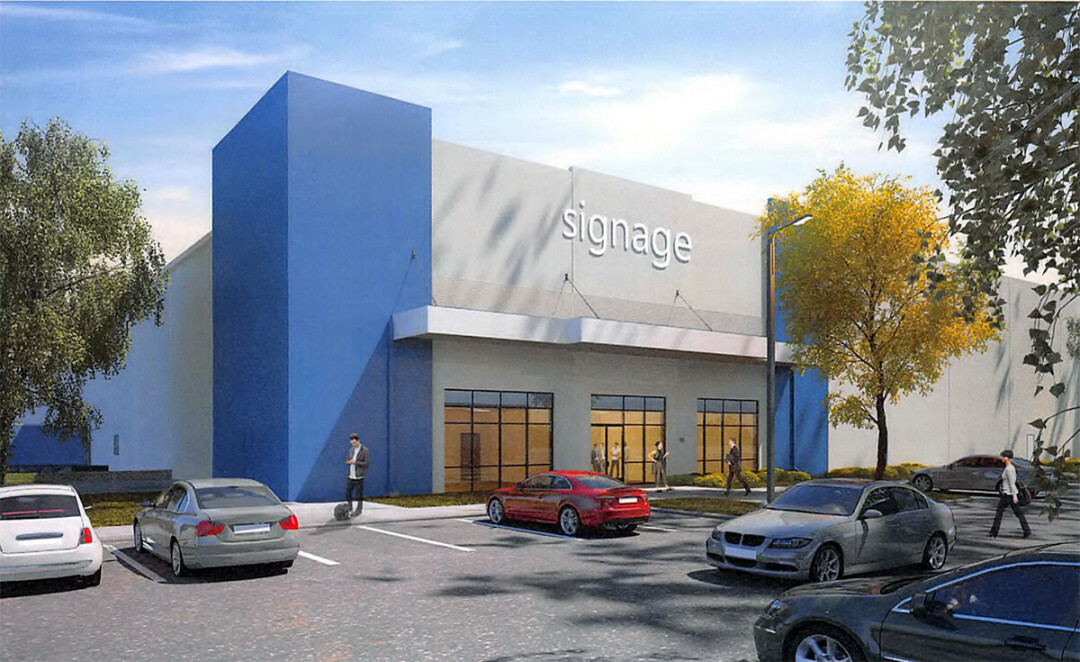 Eau Claire City Manager Stephanie Hirsch said the development will help the city economically by adding to its property-tax base. Because of state-imposed limits, Hirsch said, Wisconsin municipalities can only boost their budgets in a handful of ways, including new growth. “The city is really in crisis financially,” she said, noting a structural deficit is expected to expand each year for the foreseeable future. “I hope that we will consider moving forward with this so that we can have enough revenue to pay for our basic services and also to pay for a sustainability coordinator.” That public position, the city says, would be created and funded by revenue generated by the Niagara project.

Aaron White, the city's economic development manager, added that the proposed facility would be valued between $50 million and $65 million. Under the proposed development agreement, the project’s first phase will create at least 58 full-time jobs at an average salary of $59,000, White said.

The City of Eau Claire has created a website to share materials about the Niagara Bottling Co. proposal. The matter will be the subject of a public hearing during the City Council’s meeting at 7pm Monday, June 13. The council is expected to vote the following day.