The Art of Getting Back Up After You Fall 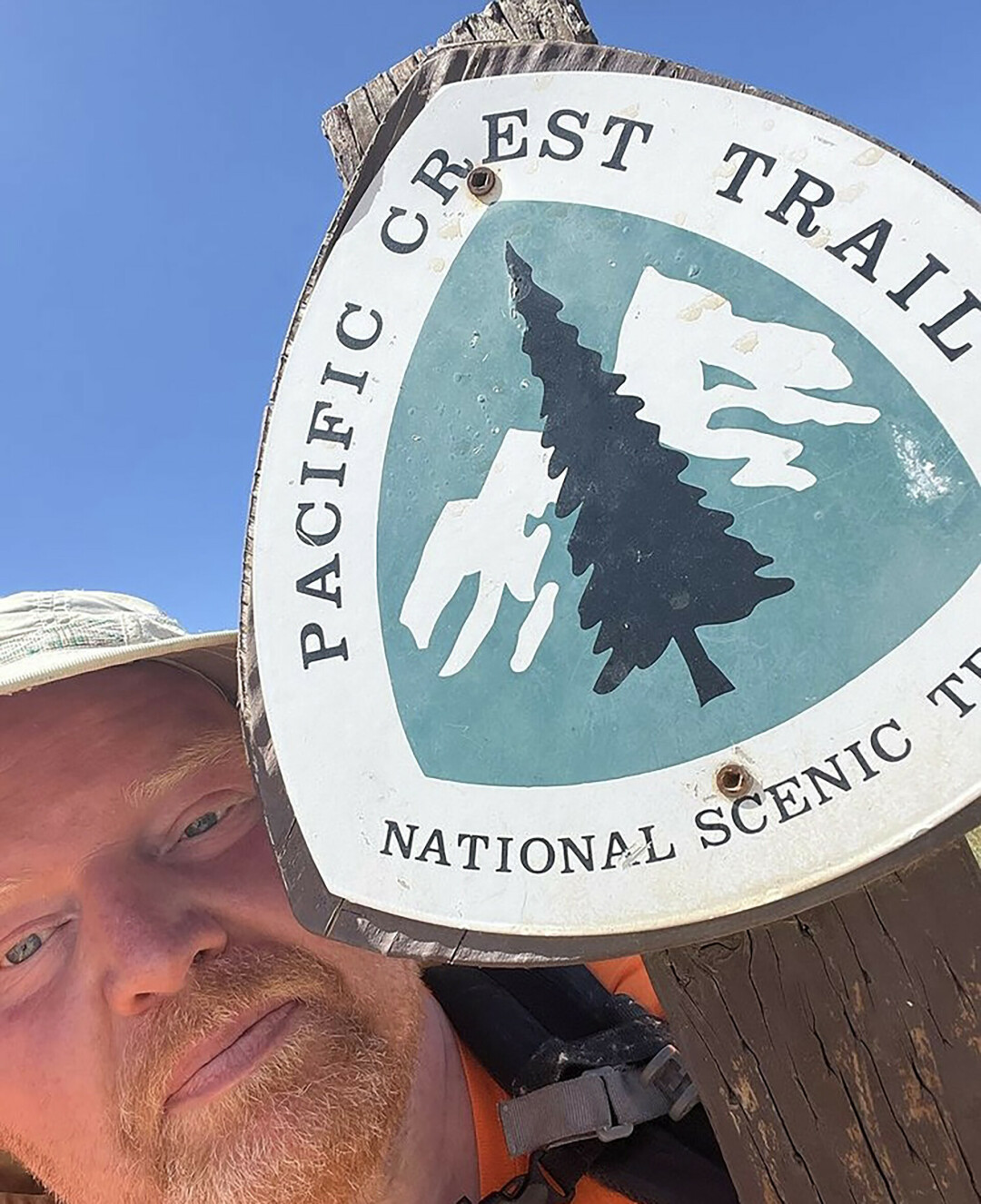 "FAIL" IS NOT A BAD WORD. Kim Acheson wants to inspire others through his hikes and workouts as a double-amputee. (Submitted Photos)

Kim Acheson came through the door, red-faced and sweaty from the unseasonable heat, apologizing for being late. Acheson, recently returned from an adventurous attempt to hike the 2,600-mile Pacific Crest Trail, had just encountered the kind of unexpected problem inherent in being a double amputee: In this case, his gym used soap to mop the floor, which made it too slippery to walk on with his prosthetic legs. I assured him it was fine and asked my first question: “What made you want to hike the Pacific Crest Trail?”

Kim, who lives in Eau Claire, explained that he had thought about biking cross-country, but concluded it would have been too difficult to do so with his prosthetics. He decided to pursue hiking instead. He discovered the three long-distance trails that have been dubbed the “Triple Crown of Hiking”: the Appalachian Trail, the Continental Divide Trail, and the Pacific Crest Trail, or PCT, each of which is 2,000-3,000 miles long.

“No double amputee has completed any of the three,” Kim said. “They’re all extreme learning experiences because there is no one to talk to about what happened, what to expect, things like that.”
Kim traveled to California in April to begin his trek. On his first day on the trail, April 20, he was hiking down a rocky trail segment and stumbled to the point where he hurt his legs in the prosthetics, bruising his bones. The next day, Kim tried to continue his hike, but his legs were too beat up. He knew with his injuries he wouldn’t be able to make it to the next source of water, so he decided to turn back for his safety. 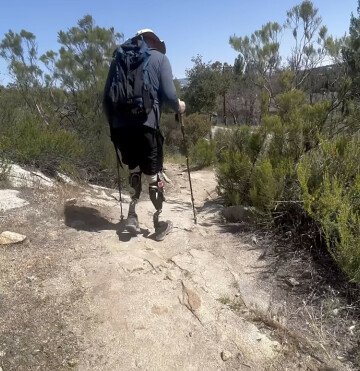 Instead of letting this setback hinder his goals, Kim turned it into a learning opportunity. He stayed at a hostel near the trail’s southern terminus in Campo, California, and spent his days taking the trail section at a time. This gave him a better sense of how he should adjust his training to better tackle the trail in the future.

“You just gotta get up and try,” Acheson said. “People are so afraid of saying ‘fail.’ I say, when you’re an amputee, you learn how to fail because you’re going to fail all the time. I’d rather try and fail at it, than not try at all.”

Kim says he has a rule for failure: You get 24 hours – 24 hours to wallow and feel sad, angry, or any emotion that might be coming to the surface. Feel all of those and accept those feelings. When those 24 hours are over, you get up and try again.

“Even if I’m not going to be the first double amputee person to complete the PCT, then my experience allows me to be that person that I wish I had, the person others can come to for help and advice,” he said.

Kim has always wanted to be that person. When he was going through physical therapy after his first amputation, he met a 70-year-old man who would sit on the course, just watching videos on his phone. After a few weeks, the man told Kim that he was getting the same amputation Kim has and thought his life was over and he had quit going to physical therapy. After watching Kim going through the track, the man became interested in working out. He started physical therapy again and looked to Kim for motivation.

A year later, when Kim had his second amputation, he met the daughter of the man, who worked at the PT facility. She told Kim that her father had died that year, but during the last part of his life, he was working out and getting into prosthetics, and he enjoyed walking to the mailbox every day, simply because he could walk.

Kim has had many people, amputees and others, come up to him and ask for advice on achieving their goals, a subject he is passionate about. While being an amputee is a large part of his identity, he expressed how he wished people wouldn’t treat him any differently because of his disability.

While Kim knows most people have good intentions, they may cause more harm than good when they go out of their way for him because he is a double amputee. He also expressed the importance of not asking amputees how they lost their limbs because the stories can be traumatic or the person may just not want to share. 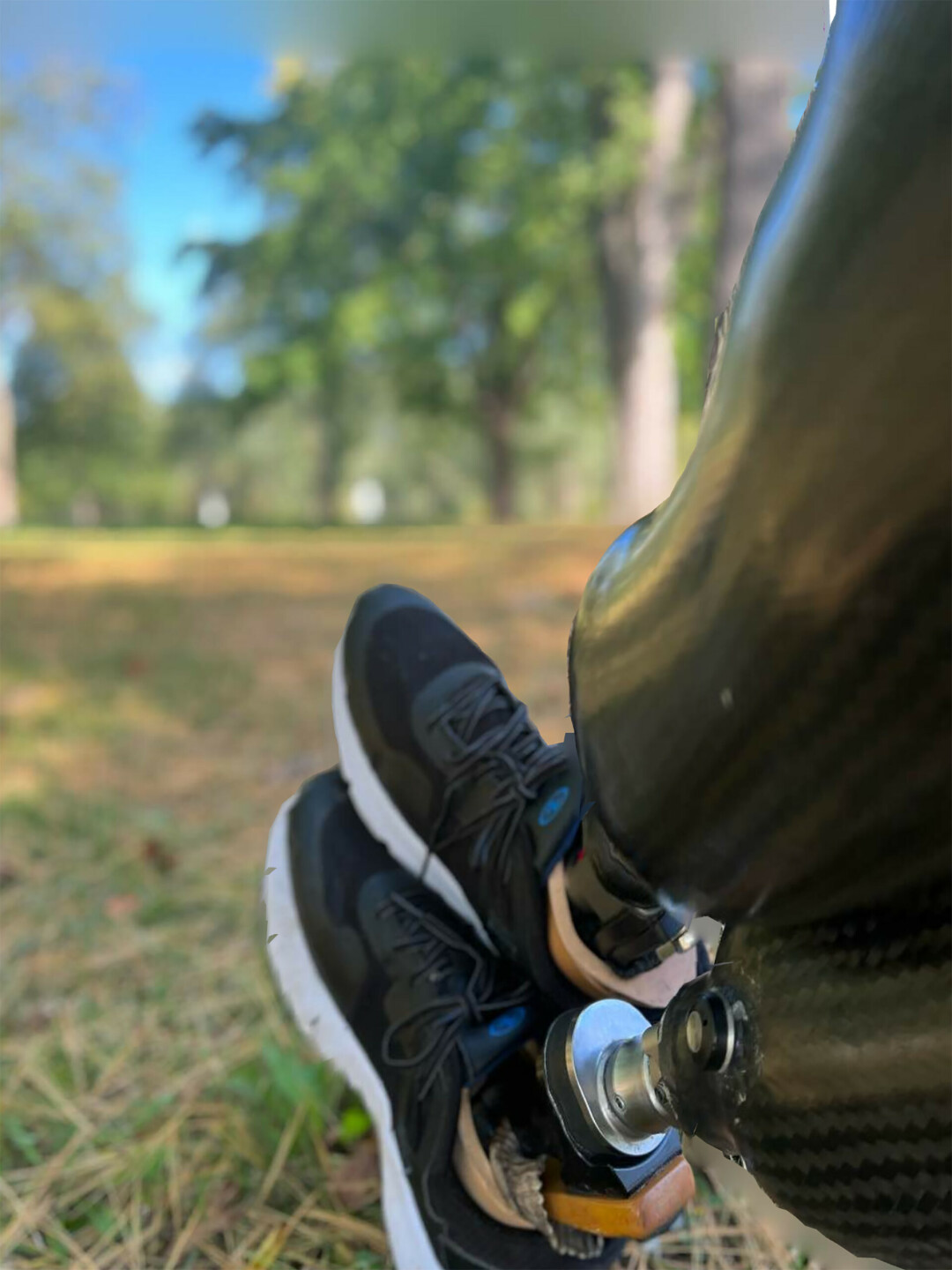 “I’ve started saying ‘five dollars for my leg story,’ ” Kim said. “People often think I’m joking or they get angry, but they don’t have to pay me, just like I don’t have to tell them my story. I wanted to make amputees feel empowered to say ‘no.’ ”

Kim shares his adventures across social media, hoping that anyone out there who is struggling with motivation or feelings of failure will see his stories and know they are capable of anything they set their mind to.

“Amputee or not, everyone has goals in their life,” Acheson said. “You’ve only got one shot to go for them and so you have to go for it.”

To keep up with Kim, you can go to his Link Tree: https://linktr.ee/TinManHikes.