City of E.C. Asked to Annex 438 Acres for Housing Development

south side annexation would include part of Lowes Creek County Park

This land on Mischler Road, south of the City of Eau Claire, is part of a 438-acre area that may be annexed into the city. (Image via Google Street View)

The City of Eau Claire will soon consider annexing 438 acres from the town of Washington, a move which could clear the way for a large new housing development on the city’s south side.

The area, which the city is calling the Stewart-Hauge Annexation, lies along Lowes Creek and Mischler roads, and includes a portion of Lowes Creek County Park. Developers who own much of the land had previously asked the Eau Claire County Board to rezone the area from agriculture use to a rural housing district. Last year the county board rejected the plan for the Orchard Hills subdivision, which would have created 117 homes. According to media reports, the County Board voted the plan down after hearing from neighbors who were worried about increased traffic and other potential problems.

Earlier this year, developers approached the County Board with a modified proposal to create lots for 107 single-family homes. However, the matter was postponed and never reached the County Board.
The new request, if approved, would print the 438-acre area into the city limits, meaning new homes – and potentially the county park – would be connect to city water and sewer services.

Last year the county board rejected the plan for the Orchard Hills subdivision, which would have created 117 homes.

In a Monday, May 9, media release, the city noted that only the City Council — not the Washington Town Board or the Eau Claire County Board — has the sole power to vote on annexation.

A “frequently asked questions” sheet produced by the city argued that the annexation will be beneficial for the city, increasing its tax base while creating more compact urban development. “The approximate new growth could be between $600 (million) to $700 million in a five- to 10-year period,” the city said. This could generated as much as $10.5 million in property tax revenue annually, which would be divided among the city, council, school district, and Chippewa Valley Technical College. Developing the land in five-acre lots, by contrast, would only created about $45 million in new growth, the city said.

In its media release, the city termed the potential development as “sustainable, compact growth,” not “urban sprawl.”

“All new areas of growth can appear to be on the fringe when they are initially developed, and it takes a while before it begins to look at feel like a city neighborhood,” the city media release stated. “When initially planned and constructed, for example, Putnam Heights would have appeared to be detached from the Third Ward or Randall Park, however, now we consider it to be a key part of Eau Claire.”

According to the media release, Lowes Creek County Park would remain a county park, not a city one, and no changes to the parks operations are expected. 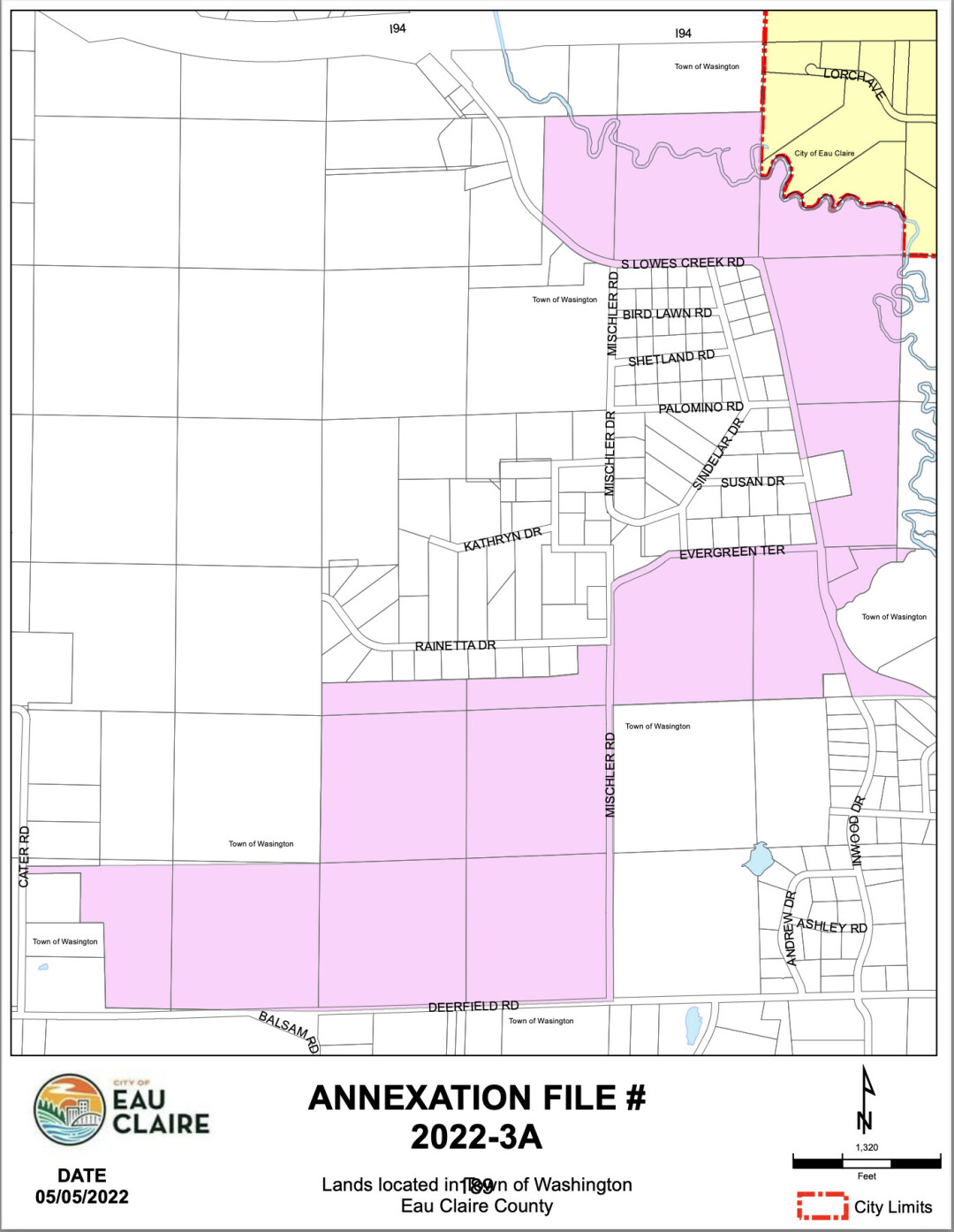 A map of the proposed annexation area, which was included in the agenda packet for the Tuesday, May 10, Eau Claire City Council meeting.
share
comments 2