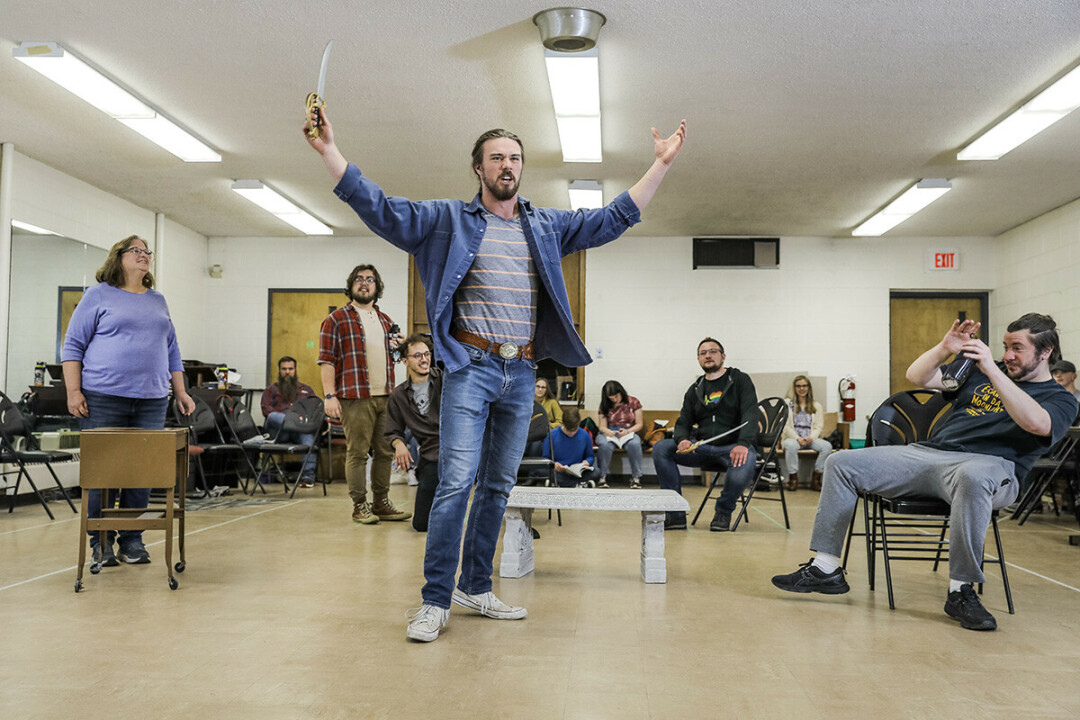 YOU CAN'T SPELL "PIRATE" WITHOUT AN "ARRRRRRRR"! William Salinas rehearses his role as the Pirate King in the Chippewa Valley Theatre Guild's upcoming production of The Pirates of Penzance.

Pirates seem to be having a cultural moment: The new HBO show Our Flag Means Death, the weird online popularity of sea shanties, and the enduring Pirates of the Caribbean franchise are just the most recent examples. In fact, pirates have long been popular in fiction, and among their cultural zeniths is The Pirates of Penzance, Gilbert and Sullivan’s enduring comic opera that has been swashbuckling its way into audiences’ hearts since 1879.

To celebrate its 40th year, the Chippewa Valley Theatre Guild is staging The Pirates of Penzance May 12-15 at the Pablo Center at the Confluence. It's an ambitious production for the company, which hasn’t tackled Gilbert and Sullivan since a 2006 production of The Mikado, but the Guild cast is up for it, says director Nate Plummer.

“We have a very, very talented, very diverse cast that came together to do this show,” he said. Many of them are theater or vocal music majors from UWEC, who bring with them the chops to sing Sullivan’s melodies while making Gilbert’s complicated and comical words understandable to a modern audience.

“We sometimes have to stop the rehearsal because we’re laughing at stuff that we’ve been watching for weeks,” Plummer said.

The Pirates of Penzance is full of everything you’d expect from a 19th-century comic opera: Dastardly villains, pompous officials, swooning lovers, and a strong current of British duty. In this case, it’s the duty of Frederick (Henry Malueg) to serve as an apprentice pirate until the end of his 21st year, but a long-hidden secret and the love of a major-general’s daughter, Mabel (Gracie Hutchinson), provide complications. In addition to the vocal acrobatics (including the beloved patter song, “I Am the Very Model of a Modern Major-General”) and Victorian-era satire, Plummer promises an additional layer of comedy that will appeal to 21st century audiences. Specifically, Pirates is being performed as a play within a play, allowing modern musical theater allusions to add to the enjoyment. Expect references to Joseph and the Amazing Technicolor Dreamcoat, Cats, Les Miserables, and more more, all done to playfully rib the Guild on the occasion of its 40th anniversary.

“This is maybe not a production of Pirates of Penzance for purists,” Plummer said.

The fast, wordy songs and the multi-layered narrative make the show a fun challenge for the cast, said William Salinas, who plays the Pirate King. “It’s things very fluid decision that I’ve got to make,” he said, referring to his role in the play-within-a-play.

The show will be presented on a thrust stage, with audience members on three sides. The presents challenges for the performers, who must make sure they can be seen and heard by everyone. Unlike traditionally opera performers, Plummer noted, this cast can’t simply “park and bark” during their songs.

Sue Falch, who plays Ruth (a pirate maid and nurse to the youthful Frederick), agreed that the biggest challenge of the show is performing it on a thrust stage. However, she said, the cast is up for the challenge. “This might be the most musically talented cast I’ve been a part of,” said Falch, a veteran of many Guild productions, including their 2006 production of The Mikado.

Plummer, who has directed and acted professionally, grew up performing with the CVTG. However, this is his first time directing for the group, which he finds particularly special during its anniversary season.
“To get to do that for the 40th,” he said, “I think just has made it more present in my mind that that’s what the Guild does: The Guild has been doing show for 40 years, and through countless obstacles and challenges, the Guild has been there to keep theater alive in the Chippewa Valley.”