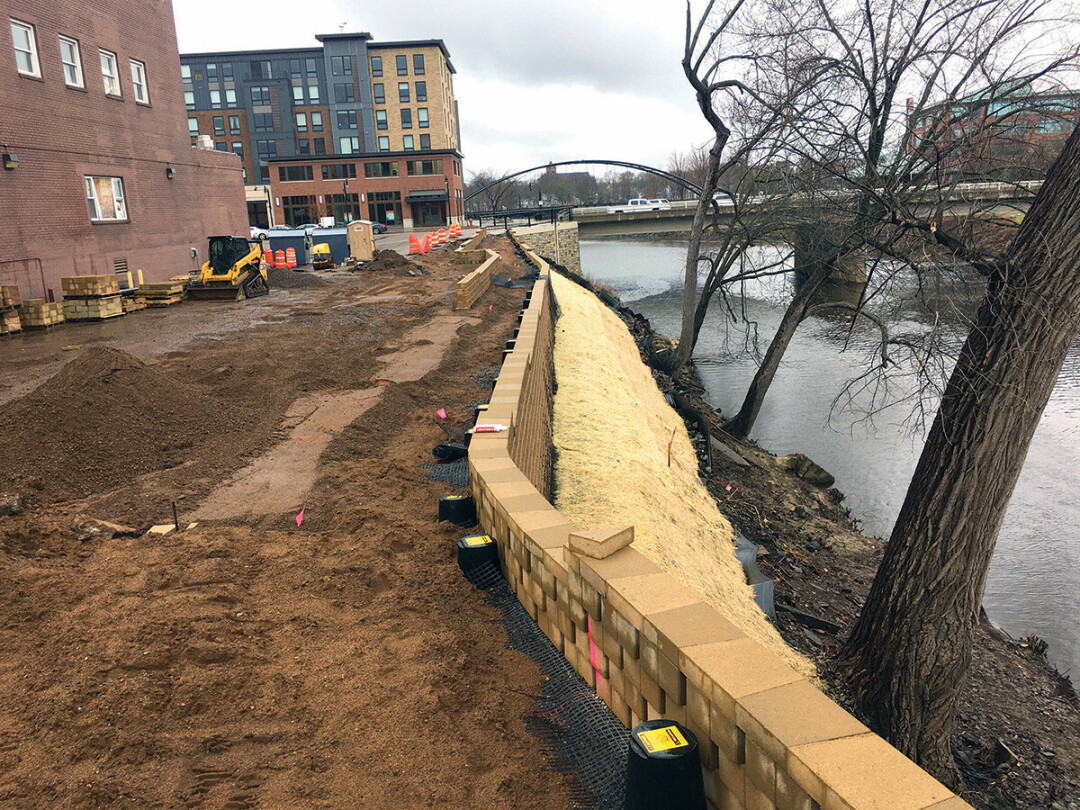 DON'T WORRY, IT WILL BE PAVED. This new trail segment will run along the south bank of the Eau Claire River between South Barstow and South Farwell streets.

The extensive network of trails in the City of Eau Claire will expand a bit this spring. For the past few weeks, contractors have been working to create a new trail segment on the south bank of the Eau Claire River, between South Barstow and South Farwell streets.

The project involves building a retaining wall along the riverbank, as well as a railing, a concrete trail, and a seat wall, all of it adjacent to a parking at the former Hope Gospel Mission building, 8 S. Farwell St.

The trail segment was originally envisioned as an underpass beneath Farwell Street, but that option proved too costly, said Christien Huppert, a civil engineer with the city. Instead, the city chose to pursue a street-level trail segment, which will eventually connect pedestrians and bicyclists moving from Haymarket Plaza to the west and the Chippewa River State Trail to the east.

However, to complete the connection, an additional trail segment must be built linking South Farwell and South Dewey streets, between the riverbank and the L.E. Phillips Memorial Public Library, which is currently undergoing extensive remodeling. That project will wait until library construction is finished, Huppert said.

Concrete for the Barstow-to-Farwell riverside trail will be poured in early May, followed by asphalt patching and railing installation. The segment should be finished by the end of May, Huppert said.

Haas Sons is the contractor on the $225,000 project. Huppert noted that because of the spot’s geography the new trail will be somewhat narrower than most city trails: It will only be 5½ to 8 feet wide, so be careful if you’re passing on a bicycle.

In other trail-related news, work began the week of May 2 to rebuilt part of the Chippewa River Trail along First Avenue, between the Phoenix Park Bridge and Grand Avenue Plaza. According to the City of Eau Claire, “Those who use the trail for recreation or as part of their commute are asked to stay off this trail segment and use caution in the area, as large construction equipment will be in use.”

The project will include create a 10-foot-wide concrete trail to replace the existing asphalt trail. The project is expected to be finished by the end of May, weather permitting.