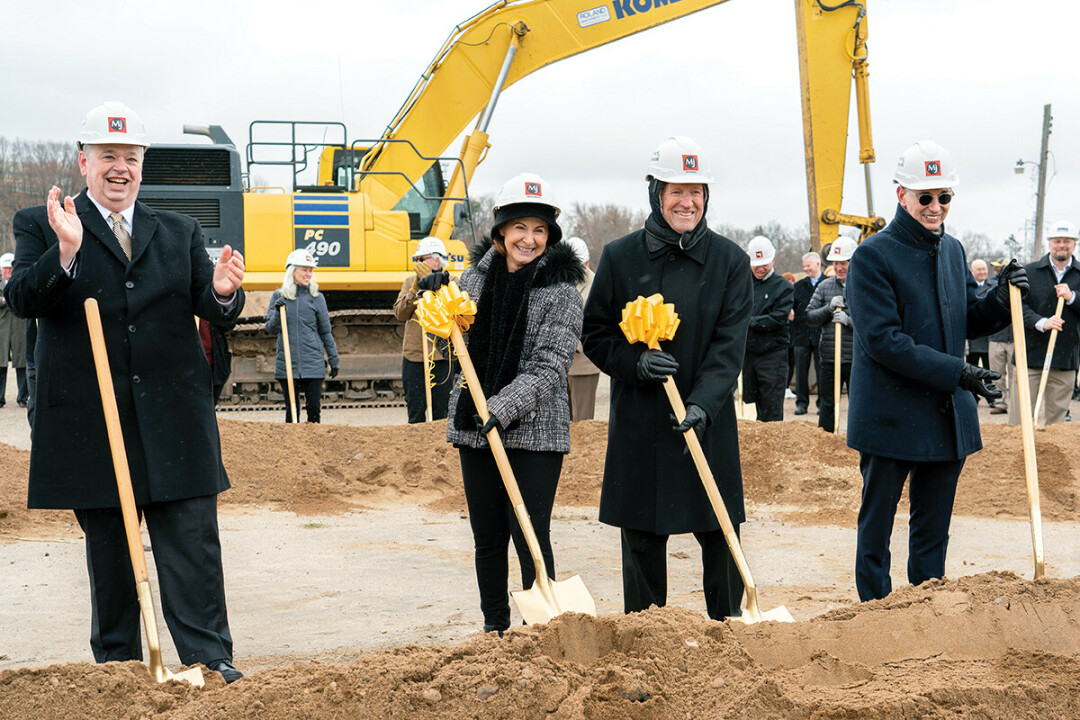 A 'COMMUNIVERSITY' PROJECT. Among those taking part in the groundbreaking of the County Materials Center were, from left, Chancellor James Schmidt, Carolyn Sonnentag, John Sonnentag, and Dr. Gianrico Farrugia. (UWEC photo by Shane Opatz)

As befits a big project, there were a lot of shovels at work when ground was ceremonially broken for the future County Materials Complex on Monday, April 25, along Menomonie Street in Eau Claire.

Front and center were Carolyn and John Sonnentag, whose record-setting $70 million gift to UW-Eau Claire, their alma mater, made the project possible. They were flanked by UWEC Chancellor James Schmidt and Dr. Gianrico Farrugia, president and CEO of Mayo Clinic, which is also a partner in the multifaceted project. All around them were several dozen others, representing a range of organizations — from the UWEC Student Senate to city leaders — who have a role in the $107 million effort to replace Zorn Arena with a multi-use public-private event center with a capacity of 5,000.

“Some said it would be a cold day in hell before this dream ever became a reality,” Schmidt said, eliciting laughter from those gathered outdoors in the unseasonably cold weather for the ceremony. “Well, I’m glad to say we’ve never given up on our dream, and it’s clearly a cold day in paradise.”

Some said it would be a cold day in hell before this dream ever became a reality.

Well, I’m glad to say we’ve never given up on our dream, and it’s clearly a cold day in paradise.

The groundbreaking took place nearly eight years after the first part of the Sonnentags’ donation to the UWEC Foundation was publicity announced. The donation of land and funds, then totaling $10 million, grew last year to $70 million, a record gift to the university. The donation included the former location of the Sonnentags’ concrete manufacturing business, County Materials Corp., which is now part of a 21-acre site along the Chippewa River. Some earth-moving and demolition have already been conducted on the site, with a few buildings remaining to be razed.

Now that the groundbreaking has occurred, construction will begin in earnest, with the goal of having the facility ready to host the university’s spring commencement in 2024. The 172,502-square-foot complex will include the John and Carolyn Sonnentag Fieldhouse, the Sonnentag Event Center, and the Mayo Clinic Health System Diagnostic Imaging and Sports Medicine Center. In addition, Pablo Properties plans to develop a hotel and restaurant next door.

Considering the many community partners involved, Schmidt dubbed it “communiversity project.” However, he said, it was all sparked by the generosity and vision of the Sonnentags.

“I want to … thank them for making sure this project never lost sight, for giving me the call to say, ‘Chancellor, when are we going to get on this project,’ for your nudging and your overwhelming support,” he said.

THE BIG DIG. Hard hats and golden shovels were in high demand Monday at the groundbreaking for the County Materials Complex. (Photo by Tom Giffey)

Carolyn Sonnentag said she and her husband were excited to see the long-awaited project finally begin. “We said years ago when this was all unveiled we just hope we live long enough to see it,” she said. “We’ve got a couple more years, but we’re going to make it happen.”

Added John Sonnentag, “I think we ought to turn some dirt and get this project going.”

“Today’s groundbreaking marks the next step in Mayo Clinic Health System’s work with UW-Eau Claire and our commitment to the city of Eau Claire,” said Farrugia, the Mayo Clinic CEO, referencing a research agreement the health system signed with the university five years ago. “The Mayo Clinic Health System Diagnostic Imaging and Sports Medicine Center, as part of the larger complex, will not only provide exceptional care and greater educational and research opportunities for UW-Eau Claire students and the community, but it will also strengthen Eau Claire’s position as a premier destination for community primary care and diagnostic care in northwest Wisconsin.”

Another unique aspect of the facility will be its sustainability: Last week, the Eau Claire-based Pablo Foundation announced a nearly $10 million package — half of it a donation, half a loan — to ensure the facility operates without using fossil fuels. It will have a geothermal heating and cooling system and will be fully electrical, receiving its power from an offsite photovoltaic system.

“At the Pablo Foundation, we’re constantly looking for partnerships and collaborations that fit our mission of sustainability through the arts and education and health efforts put into this community, and this project just made perfect sense for us to participate in,” said MaiVue Xiong, the foundation’s executive director.

According to UWEC, the complex will feature: