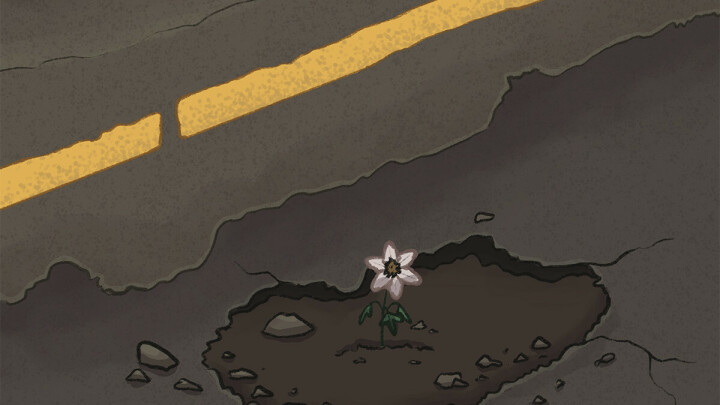 THE REAR END: Time to Fill In the Gaps

Are potholes our enemies or a gateway to communal bonding?

I love potholes. And I’m tired of pretending I don’t.

As happens every spring, all that salty freezing, and thawing over the past few months has really done a number on our motorways. Some roads are worse than others, and some roads in particular really aren’t “roads” anymore. They’re more like piles of shattered cinder blocks, broken up by the occasional trench. Not that I’m complaining.

If you don’t like driving around potholes, just do what I do. Pretend you’re Han Flippin’ Solo in Star Wars (The Empire Strikes Back, duh) navigating an asteroid field in his Millennium Falcon (his small, 4-cylinder Millennium Falcon that says “Kia” on the back). My wife gets to be Princess Leia and my kids get to be the droids, or two Chewbaccas depending on how much sugar they’ve had.

Can you even imagine how awesome this makes driving down our pothole-speckled roads? Before, all you could do is grumble and moan about how horrible life is, but now you get to have big-time fun! Now you get to gracefully swoop around craters in the blacktop and make split-second decisions on which way to swerve as you straddle hole after hole, struggling to save your tires, your suspension, and your sanity – because the Empire’s TIE fighters are chasing you!

Now, many of you probably think the city could and should be doing more to fix up all these potholes. Maybe you’re right. I must admit, I don’t know enough about how the funding works, when the best time for repair might be, or if Eau Claire is any better or worse at road maintenance than other towns.

But I’m not about to let my lack of understanding stop me from blasting you with my opinion: The city should absolutely do something about the potholes. They should enhance them.

Why not build little jumps in front of the really big chasms so we can go all Dukes of Hazzard on the way to the office? Cue up your hillbilly music, buckle yourself in, and simply fly over those pesky holes. I bet you could even get the cops to chase you, just like Rosco P. Coltrane in hot pursuit. We could all get CB radios to talk to each other and come up with awesome CB radio nicknames.

Sorry dudes, “Bearded Lightning” is taken. By me.

Maybe the city can create an elaborate point system based on navigating the worst stretches of road. You’re awarded points for successfully avoiding holes, and you can score bonus points for successfully navigating a four-way stop, which has nothing to do with potholes but seems to be a daunting enough task around here to warrant its own reward system. You can rack up points, and at the end of the year, you can apply them towards paying your water bill.

How about a pothole festival? The annual “Hole Shebang Festival” could grab many a tourism dollar during a time of year typically devoid of citywide hoopla. We could fill the holes with fun stuff like party hats, free candy, street performers, and Leinenkugel’s Berry Weiss.

All you Grumpy Gilberts out there just gotta stay positive. If the city hasn’t yet filled your favorite pothole with asphalt, maybe you could fill it. With love.

People, if you keep looking for problems, do you know what you’ll find? More problems. And more potholes. They’re everywhere. But if you look for possibilities, you just might find opportunities. So perch those pithy thinking caps upon your dapper heads, and get with the brainstorming. I’m sure the next great idea is just a hop, a skip, and a giant leap (over a pothole) away.