Kenny Broberg had been scheduled to play with the CVSO in March 2020. Then the pandemic hit 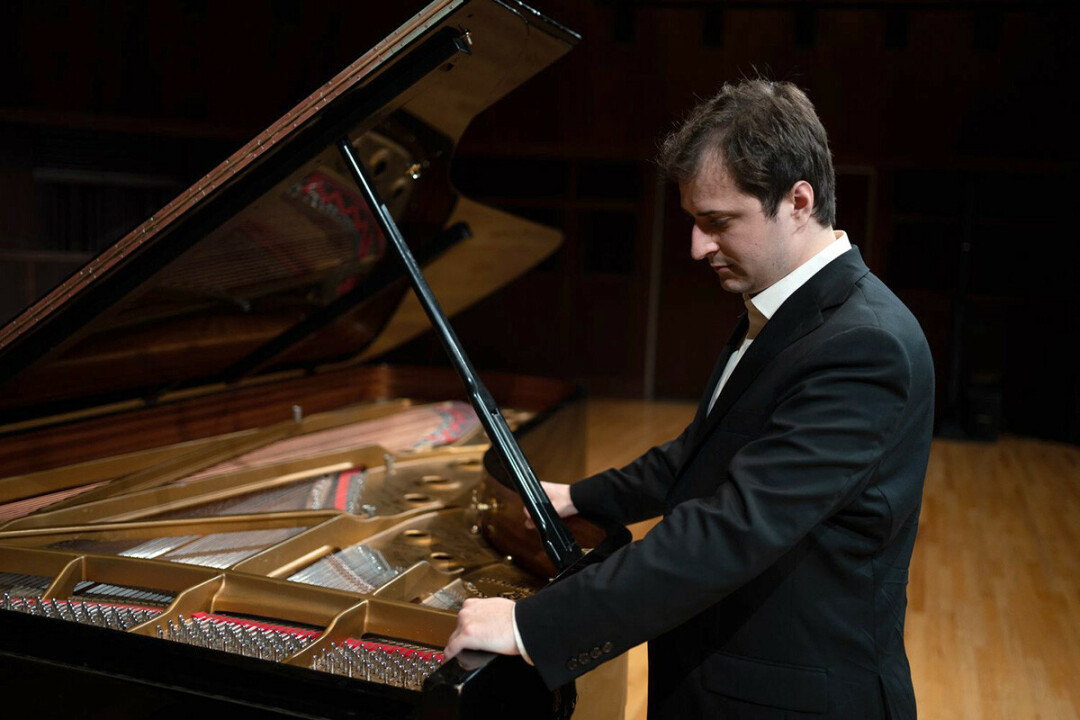 CHECKING UNDER THE HOOD. Classical pianist Kenny Broberg will perform with the Chippewa Valley Symphony Orchestra May 6. (Photo by Lee Clifford)

Classical pianist Kenny Broberg, the first place winner of the 2021 American Pianist Awards, the premiere piano competition for American pianists age 18 to 30 years old, is the guest artist for “Brahms in Spring” at 7:30pm Friday, May 6, at Pablo Center at the Confluence in Eau Claire. This is the final concert of the season by the Chippewa Valley Symphony Orchestra, led by Conductor and Music Director Nobuyoshi Yasuda.

The 28-year-old Broberg will perform “Piano Concerto No. 2 in B-flat Major” by Johannes Brahms, described as extremely difficult and one of the most physically demanding piano solos ever written. The piece took Brahms three years to create, and its four movements last 50 minutes.

A native of Minneapolis, Broberg credits his Italian grandfather’s love of the “Three Tenors” as his first exposure to classical music, and started piano lessons at age six on his family’s upright piano. He studied piano and balanced his musical lessons while playing baseball and hockey in high school. He remains a fan of both the Twins and the Wild, and is known to check their scores on breaks from piano practice. Broberg earned a bachelor’s degree in music from the University of Houston Moore’s School of Music in 2016. He is currently a graduate student at Park University in Parkville, Missouri, and studies with the 2001 gold medalist of the Van Cliburn International Piano Competition.

Broberg was originally scheduled to play with the CVSO in March 2020 and landed at the Chippewa Valley Regional Airport just as UW-Eau Claire was shutting down its rehearsal space and the Pablo Center was canceling all events. During the pandemic, Broberg started to write music to better understand how composers work, and enjoyed the creative process.

Broberg’s visit is made possible by the generosity of Mel and Leann Breed, who were named the Chippewa Valley’s Outstanding Philanthropists in 2015. While Mel unfortunately passed away in 2021, Leann will be attending the concert.

The program also includes Brahms’ “Academic Festival Overture,” which he composed as a thank you to a university for an honorary degree, and is described as a “very boisterous potpourri of student drinking songs.” In addition, the CVSO will perform Ludwig van Beethoven’s “Egmont Overture,” which was written in honor of the 16th century Count of Egmont for his valiant (and ultimately fatal) stand against oppression. This piece later became the unofficial anthem of the 1956 Hungarian Revolution.