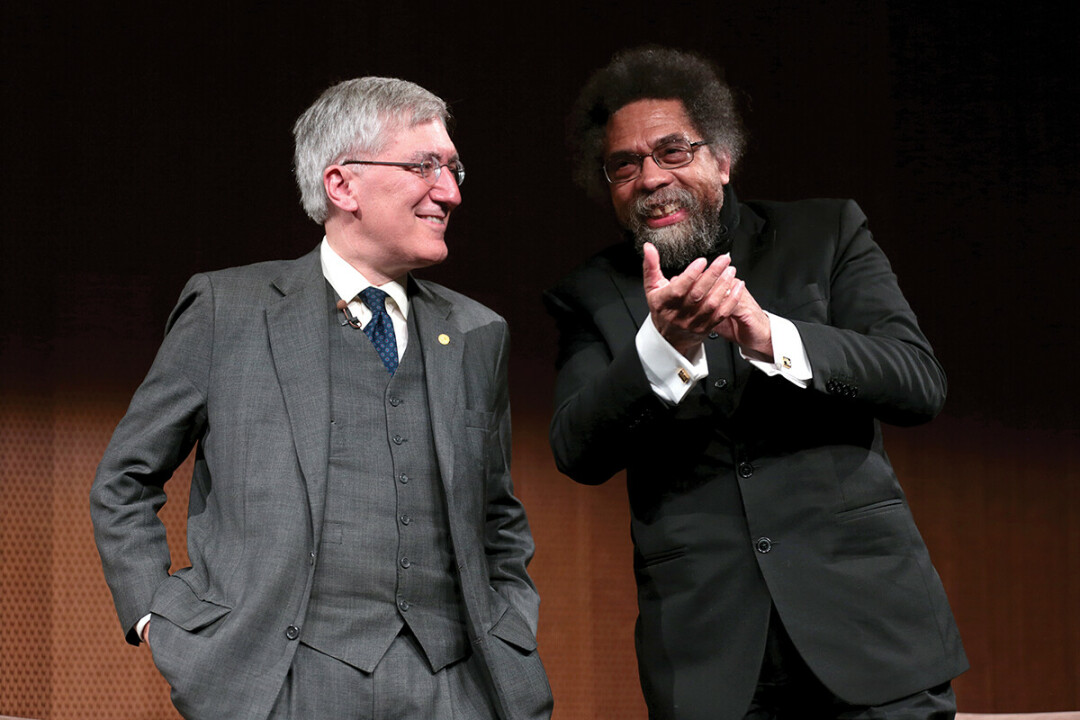 FOOD FOR THOUGHT. Noted academics Drs. Robert George and Cornel West will be the featured guests for a "Freedom of Expression and Civil Discourse” event May 5 at UWEC. (Photo by Gage Skidmore | CC BY-SA 2.0)

Free speech and its role in education and society will be the subject of a discussion between two public academics who are friends despite being on opposite ends of the ideological spectrum.

UW-Eau Claire's Menard Center for Constitutional Studies will host the event, which will be a moderated conversation with a time for questions and answers.

Dr. Eric Kasper, professor of political science and director of the Menard Center for Constitutional Studies, will moderate the conversation.

Despite their differences, both are champions of the freedom of expression and open inquiry.

Through shared public events such as the one on our campus, these two longtime friends remind us that people with divergent views can have honest, thoughtful, and respectful conversations about critical political and cultural issues.

“We are proud to host Drs. West and George on UW-Eau Claire's campus," Kasper says. "Both are accomplished professors and authors who have very different views politically and socially. Despite their differences, both are champions of the freedom of expression and open inquiry. Through shared public events such as the one on our campus, these two longtime friends remind us that people with divergent views can have honest, thoughtful, and respectful conversations about critical political and cultural issues.”

West is the Dietrich Bonhoeffer chair at Union Theological Seminary, a professor emeritus at Princeton University, and honorary chair of the Democratic Socialists of America. He teaches on the works of Dietrich Bonhoeffer, as well as courses in philosophy of religion and African American critical thought. The author of 20 books, he is best known for Race Matters and Democracy Matters and for his memoir, Brother West: Living and Loving Out Loud. His most recent book, Black Prophetic Fire, offers a look at 19th- and 20th-century African American leaders and their visionary legacies.

George, who has been called one of the nation’s most influential conservative Christian thinkers, is professor of jurisprudence and director of the James Madison Program in American Ideals and Institutions at Princeton University. He also is a visiting professor at Harvard Law School. He has served as chairman of the U.S. Commission on International Religious Freedom and as a presidential appointee to the U.S. Commission on Civil Rights. He has served on the President’s Council on Bioethics and as the U.S. member of UNESCO's World Commission on the Ethics of Science and Technology. He was a judicial fellow at the Supreme Court of the U.S. Baylor University has named its new Washington, D.C.-based program the “Robert P. George Initiative in Faith, Ethics, and Public Policy.” His most recent book is Conscience and Its Enemies.

Tickets are free but must be reserved online. For now, the event is in-person only. A virtual option may be added if it becomes necessary because of COVID-19.