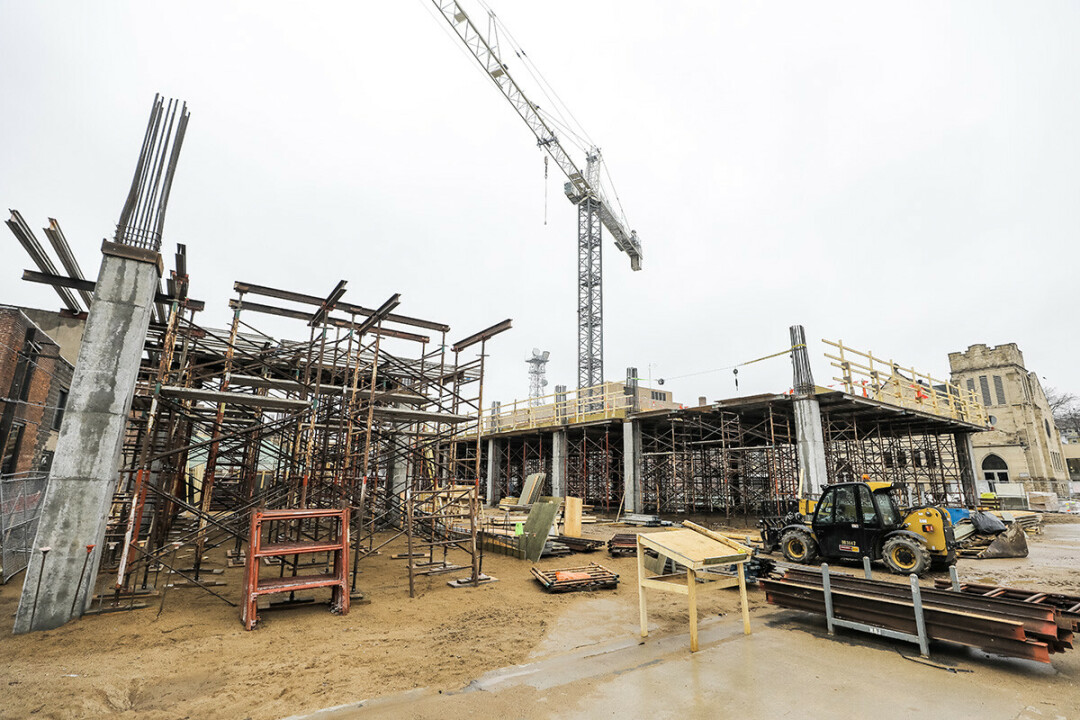 MOVIN' ON UP. The new Eau Claire Transit Center on Farwell Street – and the costs to build the facility – are both heading upward.

The “radically escalating costs” of building a mixed-use public transit building in downtown Eau Claire have led the Eau Claire City Council to pledge more taxpayer dollars toward the project.

The City Council voted March 23 to boost the city’s share of the project to about $9.55 million from an originally planned $1.25 million. Originally, the city was slated to build the ground-floor bus transfer center and one floor of parking above it, while a private developer would add an additional level of parking on top of that as well as three floors of below-market-rate apartments. The new transit center had been in the planning stages for years, and in 2018 the city received a $5 million federal grant toward the project. Construction finally began last September on the 400 block of South Farwell Street.

We’re just dealing with radically escalated costs and the challenge … for a developer stepping into a project that was already underway.

The reason, said Aaron White, Eau Claire’s economic development manager, is the rising cost of construction. “We’re just dealing with radically escalated costs and the challenge … for a developer stepping into a project that was already underway,” he said.

Under the option chosen by the City Council, the city will now be responsible not only for the cost of the bus center itself but also the two levels of parking above it and a concrete slab on top of that, which will support the apartment levels.

Now that the City Council has committed to paying more of the development’s cost, finalizing an agreement with Impact Seven should happen fairly swiftly, White added.

So where will the additional funding come from? There are several possibilities: Some may come from the city’s capital improvement plan – a rolling, five-year plan for the city’s infrastructure needs. It could also come from a special Tax Incremental Financing district that includes the transit center site.

Ultimately, the funding decision will be up to the future City Council (several members of which were elected April 5) and incoming City Manager Stephanie Hirsch, White said.