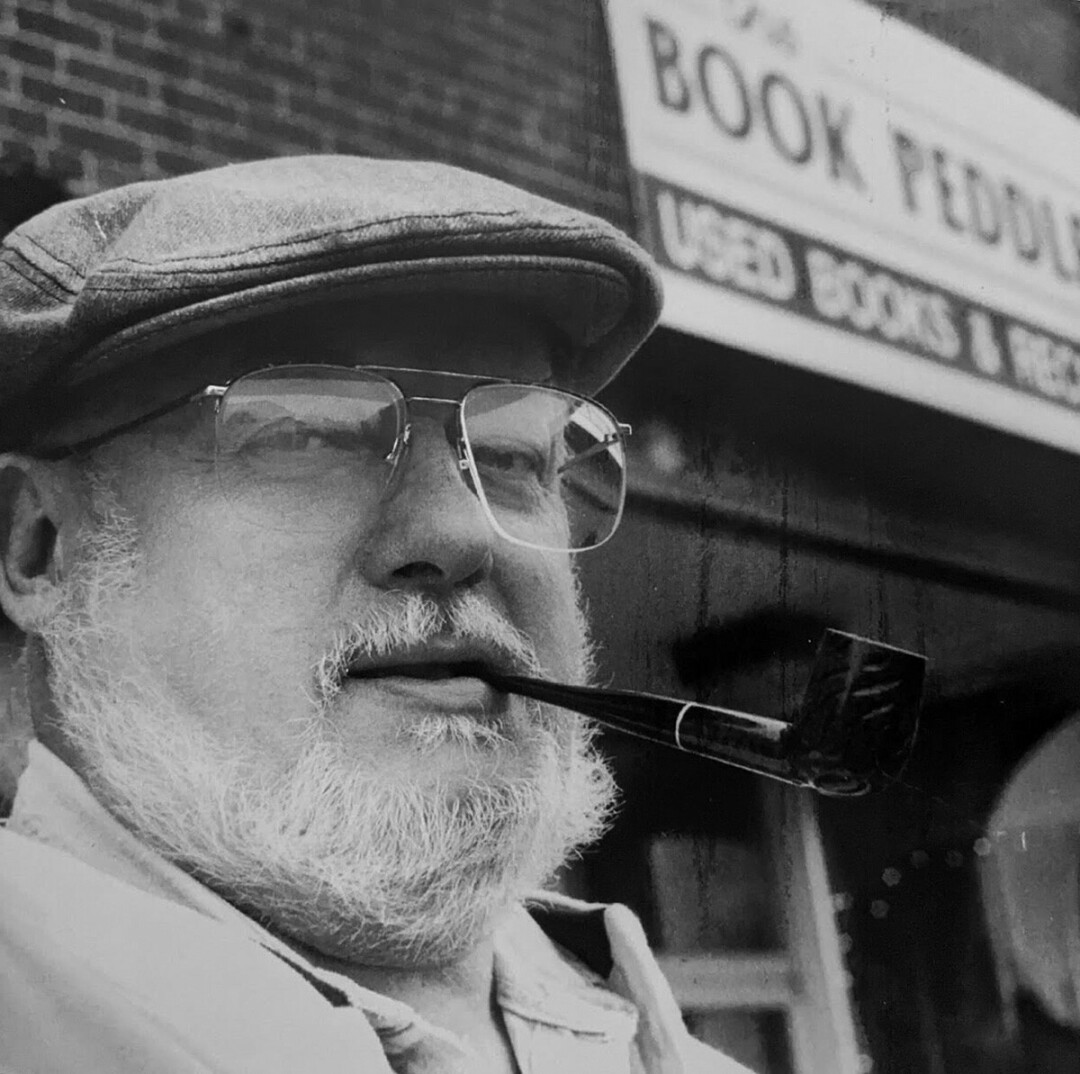 PEDDLER OF BOOKS. The late George Tillema outside the second location of his store, The Book Peddler, when it was located behind Fleet Feet on Water Street. (Photo courtesy Glenn Tillema)

Though it closed its physical doors nearly 20 years ago, longtime Chippewa Valley book lovers are likely to remember the Book Peddler, a magical bookshop on Graham Avenue filled with more than 100,000 volumes as well as the smoke from proprietor George Tillema’s pipe. It was the kind of place where you could while away an afternoon browsing towering shelves, then leave your payment on the counter while the owner slept because you didn’t want to wake him.

For more than 20 years, Tillema owned the book store, first in two locations in Eau Claire’s Water Street neighborhood and later in the former JC Penney, 315 Graham Ave. When that store closed in 2002, Tillema continued selling books online until age and declining health got in the way.

Tillema – a Wisconsin native, U.S. Air Force veteran, cartographer, bike enthusiast, and book lover – passed away in early December at the age of 85. His son, Glenn, memorialized him in a recent post to the “You Know You Are From Eau Claire When …” Facebook group (excerpted below). 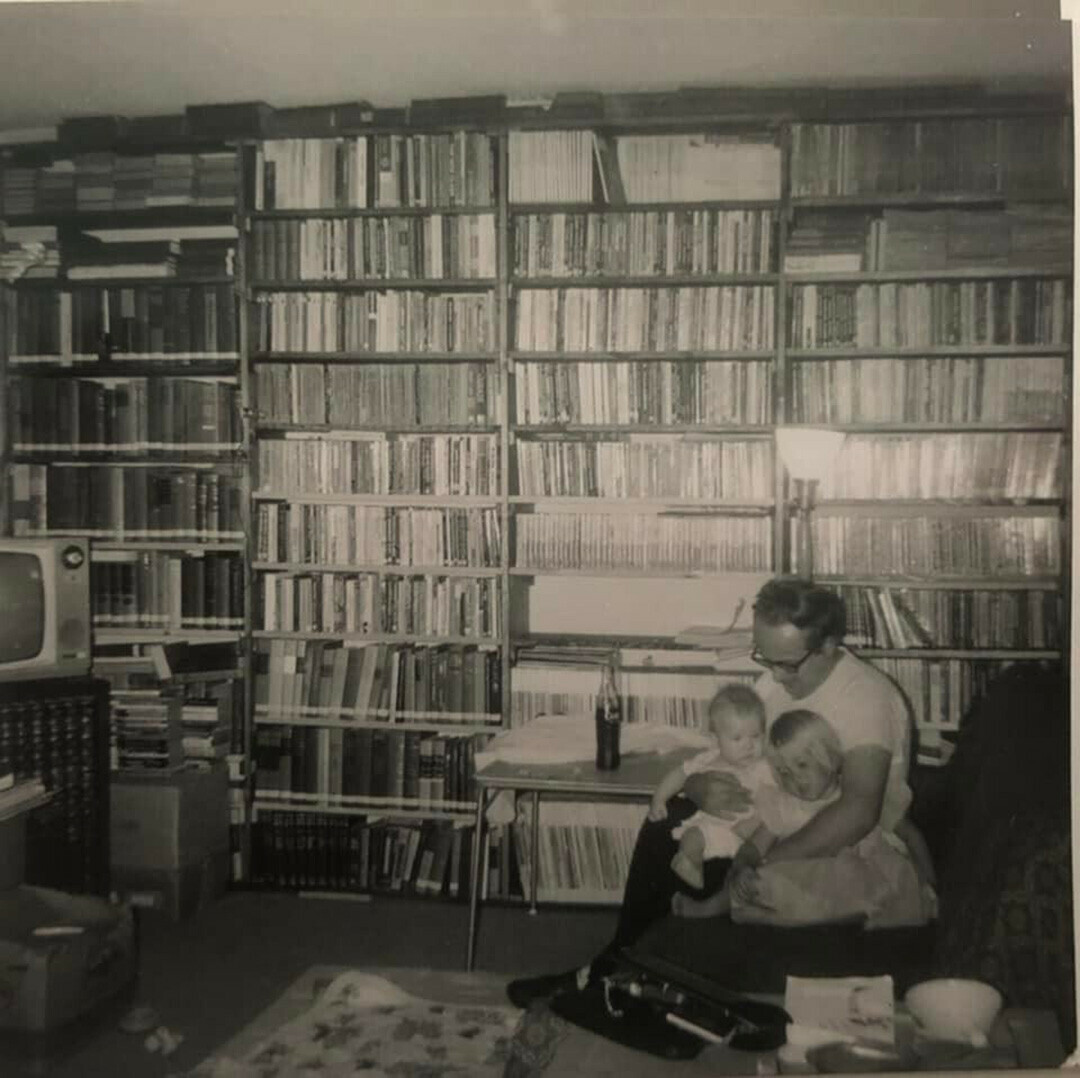 BOOKS INSTEAD OF WALLPAPER. George Tillema in the Michigan apartment where his book collection began. (Courtesy Glenn Tillema)

The Book Peddler had its roots in the late 1960s in Michigan, when as a college student George Tillema covered the walls of his apartment with homemade bookshelves, some of them filled with books two deep. Later, the Tillema family relocated to Eau Claire, where George worked as a cartographer for the State of Wisconsin. When his job moved to Madison, George stayed in Eau Claire, and began to sell books at thrift sales and flea markets. What began as a way to make extra money eventually turned into a store.

“At this point the Book Peddler’s collection had reached about 130,000 books and dwarfed the local public library as well as most other used book sellers in the Midwest.”

“This first storefront on Water Street was in an old pizza shop,” son Glenn Tillema wrote. “All of his old homemade shelves from Michigan came to play as he filled the space. It was cramped but profitable. He played National Public Radio or whatever album he was into at the time (Peter Gabriel’s ‘Security’ in German or Tomita’s ‘Holst: The Planets.’) In the afternoons he would audit language courses at UW-Eau Claire such as Russian, German, and Spanish. I remember every month we’d get an edition of the USSR national paper, ‘Pravda,’ (aka Justice) and he’d translate it in order to understand it. He’d also get monthly editions of the German magazine, ‘Der Spiegel,’ and would spend hours at the UWEC library or cafeteria translating them.” 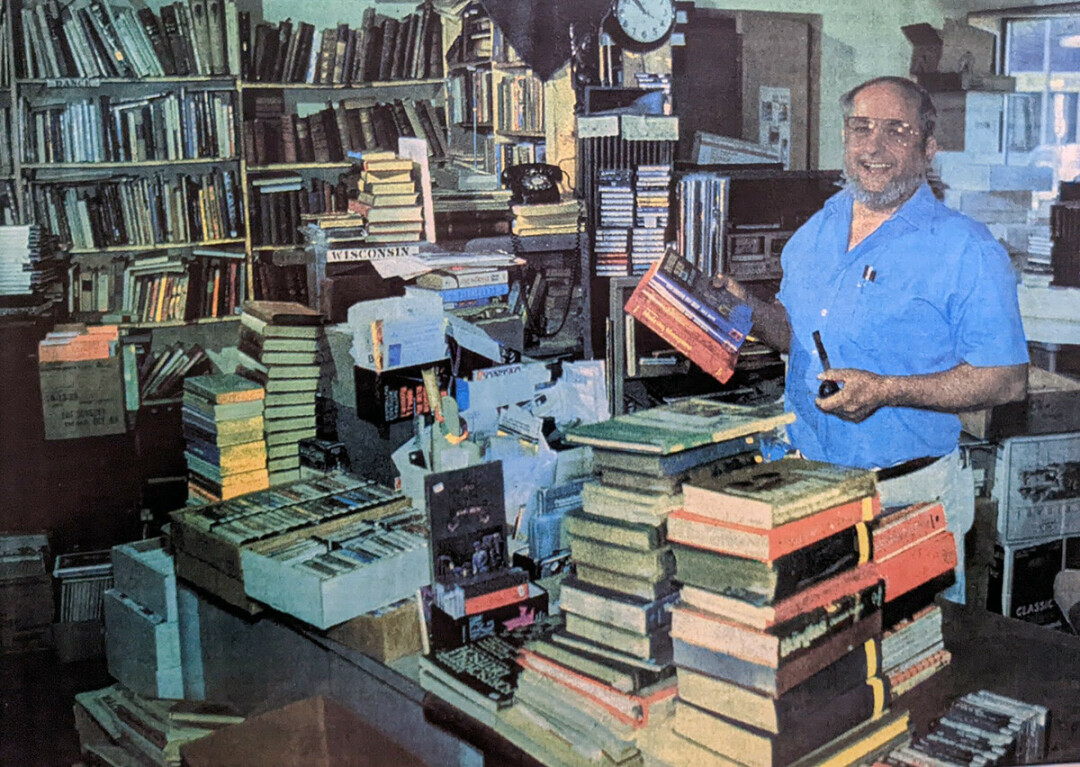 READ ALL ABOUT IT. George Tillema pricing books at the counter of his shop on Graham Avenue. (Photo courtesy Glenn Tillema)

The Water Street storefront was quickly outgrown and the store moved to a spot behind “Fleet Feet on Water Street.” The space was nearly the same except the main building had an attic. I remember helping drywall the attic so customers would have more shelves to browse. This new store front wouldn’t last long and soon a new space was found and moved to – the old JC Penny store on Graham Avenue.

The old JC Penny was divided into two spaces; one which held the Book Peddler and the other which held various public offices. At this point the Book Peddlers collection had reached about 130,000 books and dwarfed the local public library as well as most other used book sellers in the Midwest. In the late ’90s with encouragement from my Mom they’d begun selling books on the internet. Within a few years the physical storefront was barely breaking even but the internet store was far more profitable – so in 2002 the Book Peddler shut its doors for the last time.

Nearly two decades later the online storefront was closed due to his health; 40-lb. boxes of books are hard to lift when you’re in your 80s, even if you’re still bicycling all over town or weight lifting or shooting hoops at the YMCA.

George loved talking to his customers, of any age, and when someone last year posted about remembering his store and people replied with stories of visiting there or talking with him it really reminded us what a great community it was to live in. I can’t think of another place where people would leave money on the counter because my Dad was sleeping (with a lit pipe in his mouth) and they didn’t want to wake him.

George Tillema died Saturday, Dec. 4. He is survived by his wife of 58 years, Janice, as well as three children and six grandchildren. A memorial service is planned for Jan. 9. You can find details on the service in his obituary. You can also read more of Glenn Tillema’s reminiscences about his father in a post on the “You Know You Are From Eau Claire When …” Facebook group. (Thanks to Glenn for allowing us to share his words and photos.)