Marking Up the Park: City Wants Your Input on Cannery Park Plans

through Dec. 20, you can use interactive maps to say what you like, dislike, and want to change about park concepts

THUMBS UP, THUMBS DOWN. Eau Claire residents can comment on the possible elements of the Cannery District they like and dislike via a new, interactive website.

Park areas in Eau Claire’s Cannery District redevelopment area could include everything from a food-truck promenade and an arts plaza to a natural amphitheater and riverfront overlooks. Or maybe a kayak launch, an all-wheel trail, or a hillside adventure play area? These and many other ideas are under consideration as the city refines plans for the redevelopment area on the west bank of the Chippewa River, which will soon blossom with new residential and commercial buildings.

After gathering input from neighbors, businesses, and city leaders via a neighborhood meeting, online comments, and a “Park-a-Palooza” event at the Brewing Projekt on Nov. 29, designers from Confluence – a Twin Cities architecture and design firm – have created several conceptual plans for the Cannery District’s park areas. The plans include possible amenities and design elements for the new 4.8-acre Cannery District Park, which will be created on a block on the north side of Maple Street, as well as for the roughly 4 acres of parkland that run alongside the river between the High Bridge and Madison Street.

We want to create something that people use and that draws people throughout the year.

“We want to create something that people use and that draws people throughout the year,” said Steve Plaza, the city’s parks and forestry manager. Cannery District Park will serve as a neighborhood park for residents, he said. In part, it’s needed because the existing Kessler Park, just to the west, will be replaced as part of the area’s redevelopment. In addition, the new park, as well as the riverside trails and green space, will provide areas for special events that will draw people from around the community.

Now that several concepts for the park areas have been created, the city is seeking public feedback on them. Now through Dec. 20, you can go to bit.ly/cannerypark to make comments on the plans. Visitors to the website can zoom in on the details of the design on an interactive map where they can comment on things they like, mark areas of concern, and pin ideas or suggestions.

“We’re very excited about the project,” Plaza said. “We want as much community input as we can.”

Plaza said the public input will inform more refined conceptual plans that will be created in early 2022. These plans will then go before various city bodies – including the Plan Commission and the City Council – for approval. Ideally, construction could begin in the late summer or early fall of 2022 and continue into 2023. The city has earmarked $3.4 million from a special Tax Incremental Financing district to pay for the new park areas.

Here’s more information on the two conceptual plans for the Cannery District: 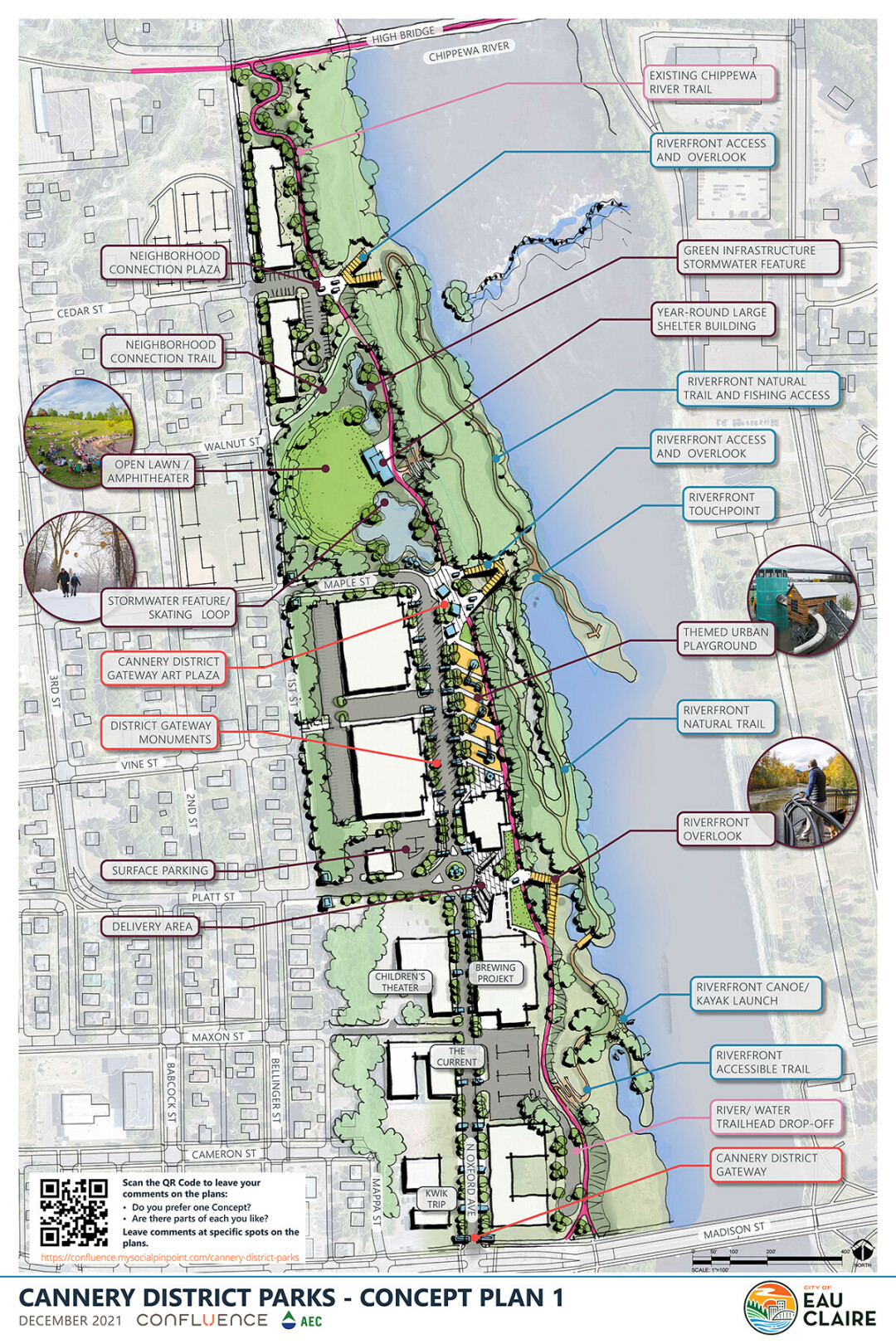 “Concept 1 focuses the active park uses along Oxford Avenue – the primary spine of the Cannery District. This concept creates a more flexible, passive space in the larger park zone at First and Maple Streets that focuses on larger event gatherings that utilize the improved hillside of the river terrace. A larger season shelter building could be utilized in all 4 seasons to support neighborhood and community gatherings.” 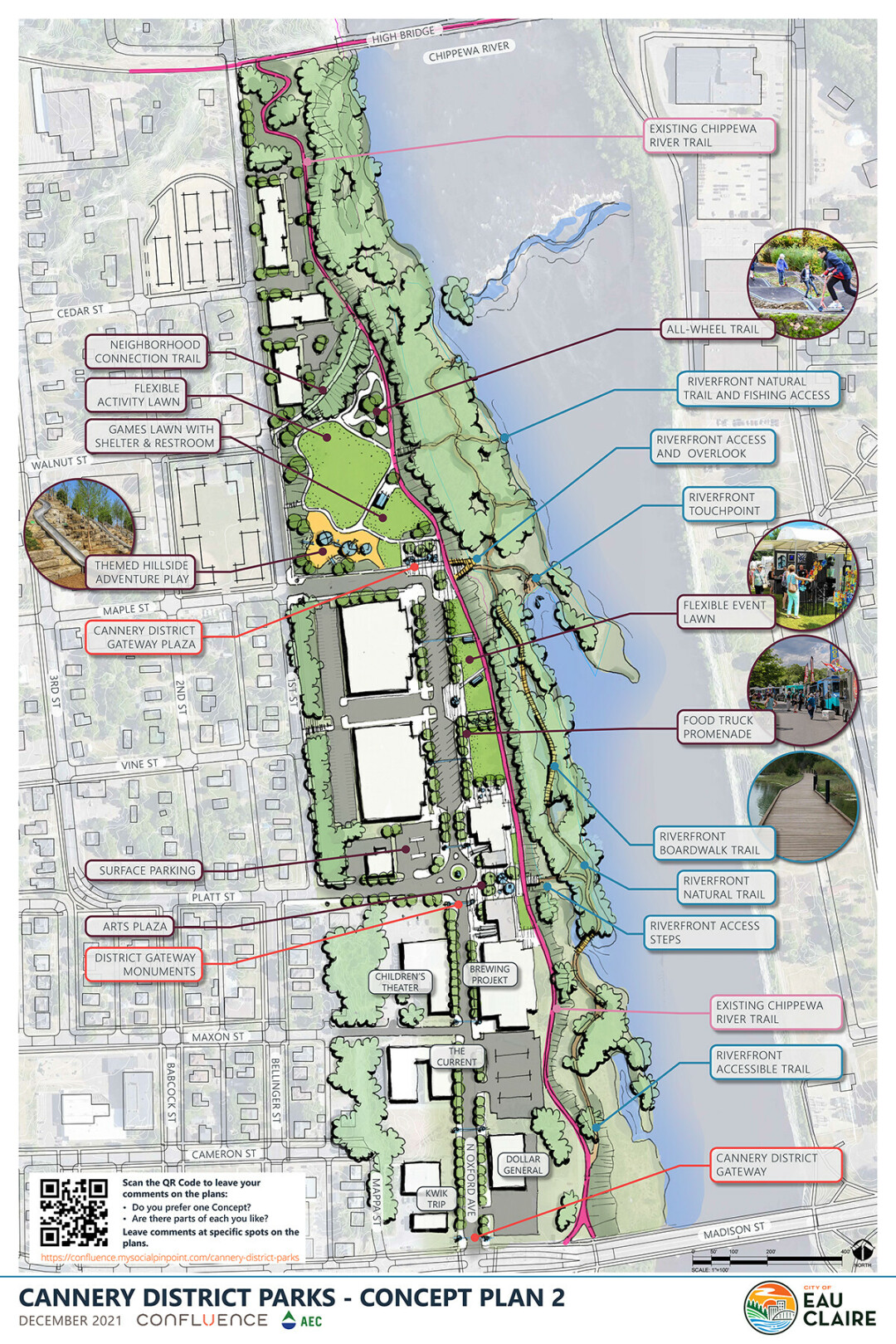 “Concept 2 maximizes flexibility along Oxford Avenue – the primary spine of the Cannery District – for future gatherings and events. This concept sites more active recreational activities at First and Maple Streets to take advantage of the hillside for play elements. Smaller shelter buildings are located strategically throughout the park space to encourage flexibility and smaller gatherings.”