Memory is the mind editing itself. Important stuff is stored and catalogued for reference while everything else, the daily flux and flow of experience, is erased or stockpiled deep in the temporal lobe, irretrievable unless something unlocks it. For me, voice is the password to the past. People change in appearance over time – put on weight, cut (or lose) their hair, go gray – yet the timbre of their voice remains remarkably the same  You might not recognize an old classmate on the street, but hear his voice on the phone and he’s immediately restored to his smirking, youthful self.

The immutability of voice came home to me when I inherited an old reel-to-reel tape recording marked “Christmas 1952.” It had been made by an uncle remembered chiefly for his big, boxy recording machine the same way another uncle was known for his musical car horn. Unfortunately, the tape was in terrible shape; the acetate was gone in places and some of the breaks had been spliced together with masking tape. I took it to a sound engineer who repaired the splices and made a master in his studio while I sat with a pair of headphones listening to voices waft across the years. Head cocked to one side, I listened like the dog in the old RCA ads, transfixed by the mystery of recognition.

The tape opens on Christmas morning at my grandparents’ apartment in Chicago, an event of which I have no visual memory, the interiors or whether it was snowing outside. The recording is like a radio play – all dialogue and sound effects; you fill in the blanks. At first there’s only the waterfall roar of wrapping paper being torn from presents and the steady thud of a tom-tom. Apparently, I am the tiny drummer.

My mother, sounding an octave higher at 30, shameless imitates my inability to pronounce the letter “r.”

“I knew you asked Santa for a dwum,” she laughs, “but I didn’t know you asked for a twain too.”

Then another face floats up through the airshaft of time, tied like a pale balloon to the thin line of a smoker’s cough. Aunt Kathleen’s bronchial hacking evokes her exactly as does my grandfather’s hushed understatement.

The immutability of voice came home to me when I inherited an old reel-to-reel tape recording marked “Christmas 1952.”

I took it to a sound engineer who repaired the splices and made a master in his studio while I sat with a pair of headphones listening to voices waft across the years. Head cocked to one side, I listened like the dog in the old RCA ads, transfixed by the mystery of recognition.

There is no talk of the greater world, of the war in Korea or Eisenhower’s recent thumping of Stevenson. Instead, the adults drink coffee, wonder if the heat’s been turned on, express false surprise at every gift my brothers and I tear into. City people, they speak with the slow deliberation of country folks, unhurried and without inflection as if they had all the time in the world.

The voices that interest me the least belong to my brothers and me, jabbering pipsqueaks who sound as if we’d taken hits off a helium balloon. At 8, my oldest brother seems acutely aware of being recorded.

We are all here in our familiar roles except my father, away on some errand, until the door swings open and he steps across the threshold of years.  Sadly, his is the only voice I don’t immediately recognize because I haven’t heard it since I was 7. In a real sense, this is the first time I’ve heard my father speak. Like listeners at a séance, we want the dead to speak to us directly, to say something of importance, something we can carry across the long gulf of their absence. Instead, they make small talk or, in my father’s case, read in all seriousness a gag gift my older brother made in Cub Scouts, something called a Fur-O-Meter.

Halfway through the gift opening, the tape abruptly jumps tracks to a party that evening at my other grandparents’ apartment. I remember that overheated place on the second floor of a U-shaped building with its dark stairwell that smelled of varnish and floorwax. For once, adults drown out children with the deep, rolling swell of after-dinner chatter, the sudden flutter of laughter like a breaking wave. The men sit in shirtsleeves on the sofa, the women clearing the table; a heavy cloud of cigar smoke tinged with lilac water hangs in the air. Uncle Eddie rues the second-hand Buick he bought instead of a Lincoln and, later, sounds like a tough guy in a movie when he complains of his boss treating him like “some guy to lug his grip.” I’d like to warn them of the future but can’t. Trapped in the past, they’re like doomed miners whom we can hear but cannot save.

The party is winding down. People are getting ready to leave, struggling into overcoats and hats, bracing themselves for the cold. But before they go, the tape recorder uncle passes around the microphone and instructs everyone to impart a holiday greeting for posterity. And for whom are these greetings intended if not ourselves tucked safely in the future? Except for Uncle Blackie who does a turn as a disc-jockey, “Good evening, ladies and gentlemen from Station WKYZ,” the others sign off as more or less themselves. “Merry Christmas and many more,” warbles Aunt Florence. One by one they make their farewells and slip quietly into the dark night. I wait for my father to say goodbye, but he never does. Instead, his sister has the final word. “It’s been a nice party, but it’s time to go,” Aunt Marcella sighs as if turning out a light. 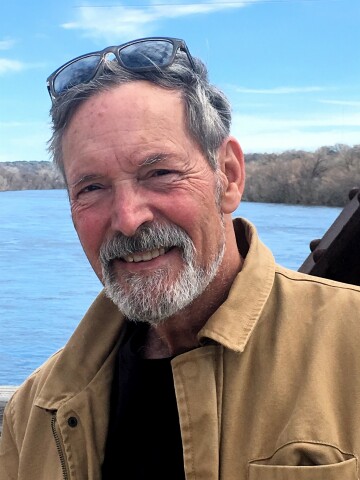 John Hildebrand, a professor emeritus at UW-Eau Claire, is the author of five books including, most recently, The Long Way Round: Through the Heartland by River. Read more of his work here.